The Australian Ballet’s contemporary triple bill Verve, having a Sydney season this year after its premiere in Melbourne last year, presents works from the company’s three resident choreographers, each with a distinctive style that serves the program well.

Veteran Stephen Baynes, who has held his post since 1995, is a classicist who puts his women on point and on a pedestal. Tim Harbour, who was appointed in 2014, offers hard-edged abstraction. Alice Topp, named a resident choreographer last year, makes work with emotional and sensual appeal. (Each was, or in the case of Topp still is, a dancer with the company.)

Harbour was nurtured through TAB’s Bodytorque new works program – where has that gone? – and so was Topp, with an eye-catching series of works that marked her out as a real talent. She was rewarded with a mainstage work in 2016, Little Atlas. Her latest, Aurum, is a significant step forward.

Verve opens with Baynes’s elegant Constant Variants from 2007, danced to Tchaikovsky’s Variations on a Rococo Theme. Its world is one in which partners address one another in a courtly fashion and women, who exude an air of containment and mystery, are admired by men as if they are precious jewels.

On opening night Ako Kondo took the role made on Madeleine Eastoe and made something different of it. Jon Buswell’s soft lighting summons thoughts of dim cloisters and Eastoe’s gentle radiance glowed like a candle in the dark whenever she appeared. Kondo has a different kind of appeal – more sophisticated and less knowable.

Harbour’s Filigree and Shadow, first seen in 2015, finishes the night with a frenetic – and, it must be said, formidable – display of athleticism. Eight men and four women stride on and off to a thunderous score by 48nord, looking in spectacular form as they fling themselves across the stage or at one another. On opening night the eye was particularly caught by Dimity Azoury, Jill Ogai, rising talent Shaun Andrews and Brett Chynoweth, who was made a principal artist last year and not before time.

Topp’s Aurum is inspired by the sophisticated Japanese art of kintsugi, by which broken ceramics are made whole again with gold lacquer. The use of gold honours the value of the original piece and at the same time highlights the damage suffered. The cracks show and become part of the piece’s history. Topp sees an analogy with human relationships. There will be breakages and flaws; and while restoration is possible, nothing will be exactly as it was.

Aurum is danced by five couples wearing simple white garments of Topp’s design. The mood is intense and yearning, supported by the rippling, swelling music of Ludovico Einaudi, a Topp favourite, and Jon Buswell’s golden lighting. 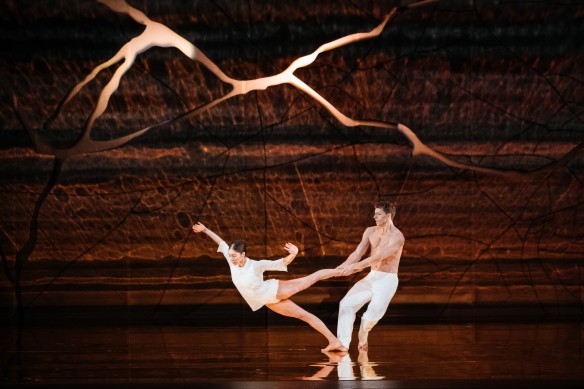 Aurum is at its best in the smaller moments – a man and woman stand in separate pools of light far from one another and raise an arm in farewell, a woman’s head rests on a man’s chest as if she is listening to his heartbeat, the shadows of two men seem to take on a life of their own, a man leans backwards and a woman cradles his head. When the group dances in unison the effect is undeniably rousing but the meaning less clear than the touching duos danced so tenderly on opening night by Kevin Jackson, Robyn Hendricks, Adam Bull and Coco Mathieson. The first three are principals artists while Mathieson is still in the corps. Her fervent commitment was outstanding.

In a big coup for Topp so early in her mainstage choreographic career, Aurum will be seen at New York’s Joyce Theater next month as part of its Australia Festival, alongside Baynes’s Unspoken Dialogues (from 2004) and a new work from Harbour.

Verve ends in Sydney on April 25.

After a year dominated by Giselle, Frederick Ashton’s The Dream, Alexei Ratmansky’s Cinderella, the lavish new Sleeping Beauty and Graeme Murphy’s Swan Lake, the dancers of The Australian Ballet were undoubtedly delighted to dive into the pared-back costumes and sharp-edged choreography of 20:21 (the title refers to the 20th and 21st centuries). They certainly looked as if they’d been let off the leash.

The three works on the bill were well chosen – very different in choreographic style but sharing a clean, uncluttered aesthetic and each driven by a score to get the blood pumping. The oldest ballet, Balanchine’s Symphony in Three Movements, was made in 1972 to music by Stravinsky (written in 1942-45); Tharp’s In the Upper Room premiered in 1986, powered by Philip Glass; and Tim Harbour’s Filigree and Shadow is new, having made its debut in Melbourne in late August accompanied by a muscular commissioned electronic score from German duo 48nord.

Symphony in Three Movements is strongly hierarchical and fascinatingly structured. There is a corps of 16 women clad in white leotards and a group of five women in black leotards, the latter supported by partners in black tights and close-fitting white T-shirts. These two sets of dancers frame three principal couples, one of which is at the centre of the work, dancing the deeply sensuous pas de deux that comprises the second movement. (Amusingly, this lovely music was originally intended to form part of the soundtrack to the 1943 film The Song of Bernadette – a biography of the young woman who saw visions of the Blessed Virgin Mary at Lourdes and was later canonised; Stravinsky didn’t complete the project.)

On opening night the women in white were rather less crisp than one would wish, nor did all of them convey the assurance and chic required to carry off the martial gestures, pony-step prancing, showgirl high kicks, jogging and more, but the three first-cast leading couples (Ako Kondo and Chengwu Guo, Lana Jones and Andrew Killian, Amber Scott and Rudy Hawkes) exuded command and sophistication. Scott and Hawkes danced the pas de deux with a sweet element of wistfulness as well as the lusciousness seen in swimming arms and entwining necks and the whimsicality of turned-in knees and hands. Scott, who is growing in stature with every season, was a glowing presence and also carried one of the ballet’s most enchanting moments as she whirled around the stage twice in a great circle of piqué turns as the corps jogged about insouciantly.

Hawkes (a senior artist) and Killian (principal artist) danced in all three works on opening night. It was an impressive feat given the demands of each. Filigree and Shadow is a non-stop display of angst and athleticism. It looks and sounds thrilling and the opening night audience gave it a huge cheer in Sydney, as I gather they did in Melbourne at the premiere, so it seems a bit churlish to point out that it doesn’t really say much about its theme of “catharsis for aggression”. Still, the cast of 12 was as sleek as seals in form-fitting grey, super-energised by the propulsive music and performed with the cocky insolence of those who know they are, essentially, as gods compared with the rest of us. Brett Chynoweth, Simon Plant and Marcus Morelli were particularly fine in their trio and Vivienne Wong and Dimity Azoury gave no quarter in their encounters with Killian and Hawkes. The elegant contributions of Kelvin Ho (set) and Benjamin Cisterne (lighting) added greatly to the sense of occasion. 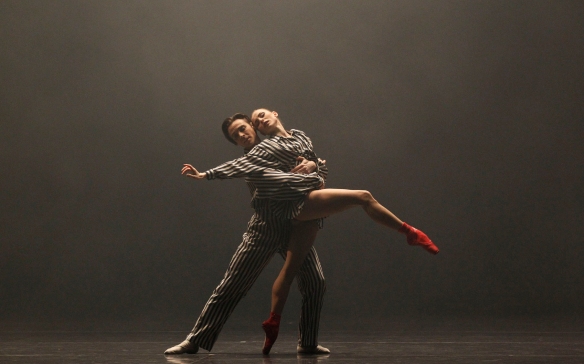 Daniel Gaudiello and Natasha Kusch in In the Upper Room. Photo: Jeff Busby

Wong and Azoury then turned up as “stompers” in In the Upper Room, the ones who wear sneakers and do a lot of running in a work that joins the languages of sport and training with that of dance. Here – and this is very rare in ballet – effort is made explicit. This is a ballet of sweat and exhaustion as well as grace and artistry. The magic comes from seeing the reach for transcendence as Glass’s music pulsates inexorably and builds towards its ecstatic final movement. In a fine first cast, principals Daniel Gaudiello and Chengwu Guo were exceptional.

A program such as this also gives opportunities for dancers from the lowest ranks to have a moment in the spotlight. From the Filigree and Shadow first cast Plant is in the corps de ballet and Morelli a coryphée, and coryphée Christopher Rodgers-Wilson drew the eye in In the Upper Room.

The Australian Opera and Ballet Orchestra had an early night, playing only Symphony in Three Movements (the other two scores are recorded). With AB music director Nicolette Fraillon at the helm the AOBO gave a strong account of this vibrant, rhythmically bracing score.

Ends in Sydney on November 21.