ON the face of it Kryptonite, Unholy Ghosts and LoveBites have nothing in common except taking place in a theatre, but seeing the three on consecutive evenings made me think of them as a group; as independent but connected pieces illuminating fundamental aspects of life’s journey. Love, death, politics …

Sue Smith’s beautifully named Kryptonite throws together politics, sex, international business and race. That combo would sap anyone of their strength. Lian (Ursula Mills) and Dylan (Tim Walter) meet at university. She is Chinese and scrambling to survive in a system that lets her study here but not earn enough money to keep herself. He’s a laidback Australian with a passion for surfing. They make a connection that, over the next 25 years, waxes, wanes and is buffeted by external forces. The massacre at Tiananmen Square is one of them; the rise of Australian business connections with China is another. 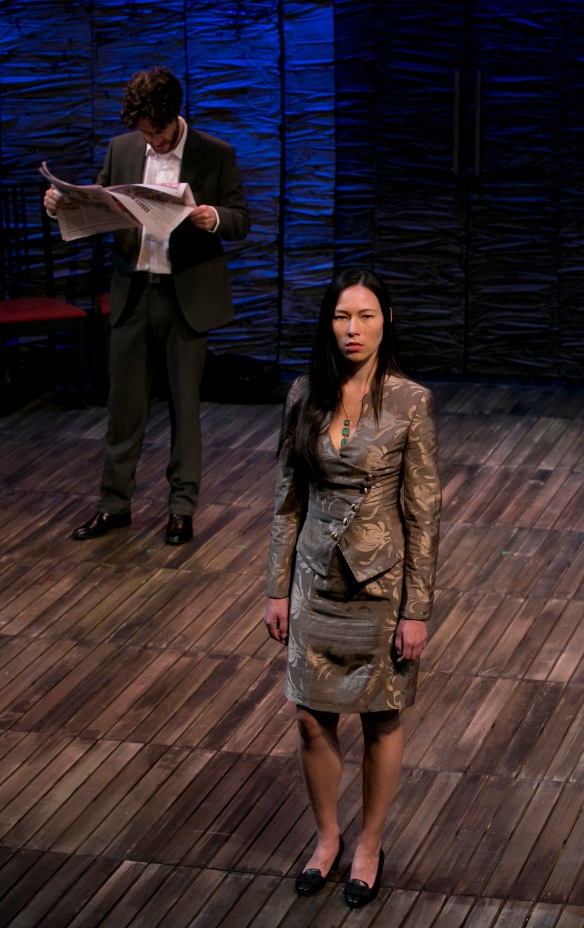 It’s fertile ground for drama and highly pertinent as, in scenes played out of chronological order, we see how events in the wider world – the Asian world – affect Lian and Dylan personally and politically.

I found the role of Dylan a little underwritten, although perhaps I should see Kryptonite again to see if that’s fair – on opening night I was so swept away by the writing for Lian and Mills’s performance that it was hard to concentrate on anything else. Even at her shyest and most vulnerable Lian is strong, witty and very, very smart. No wonder she becomes a tough and successful operator, although with divided loyalties. Smith has written a mesmerising part and Mills is extraordinary. Geordie Brookman directed.

Unholy Ghosts isn’t so much a play as a group therapy session. I don’t mean this unkindly. I was absorbed by Campion Decent’s story, based on his own experience, but its power is that of personal, intimate revelation. I too have lost my parents, as people of a certain age do. It was only when my father died last year, eight years after the death of my mother, that I realised it was possible for a mature adult to feel orphaned. Decent’s story has the added pressure of parents dying within a short space of time, of them having been acrimoniously divorced, and the hovering presence of a long-dead sister. James Lugton, playing the Son, talks about his dying parents and talks to them, although some of the dialogue sounds suspiciously like people telling people they are close to things they should already know. Father (Robert Alexander) apparently terrified Son when he was a child but we must take that on faith, as the old man we meet is certainly irascible but rather a sweetie. Mother (Anna Volska) is a former actress and loads of fun.

The technical shortcomings include a rather awkward ending, but it was impossible not to be moved by the deeply felt discussion of death: how to face it, how to cope with it.

I saw LoveBites when it premiered at Sydney’s Seymour Centre in 2008. I reviewed it for The Australian and I started my piece this way:

“James Millar is seriously talented. Not yet 30, he’s written, with composer Peter Rutherford, songs about love that are fresh, literate, humane and insightful. The most trampled-over subject in musical theatre has come up sparkling.”

Obviously Millar is a few years older now, but I’m happy with the rest of the sentence and with the conclusion. It’s great to see a revival at the Hayes Theatre, very well cast with Kirby Burgess, Tyran Parke, Adele Parkinson and Shaun Rennie. Troy Alexander directed, there’s smart choreography by Ellen Simpson and designer Lauren Peters uses the small Hayes Theatre Co space astutely by using two revolves. Becky-Dee Trevenen does a pretty good job with the costumes, which the four performers have to change at speed to accommodate their very different characters. The band, under the musical direction of Steven Kreamer, is fine as far as it goes but the sound balance is out of whack and does a disservice to the singers.

But you know what? I’m just going to haul out my 2008 review. Change the names and the design concept and we’re all good.

JAMES Millar is seriously talented. Not yet 30, he’s written, with composer Peter Rutherford, songs about love that are fresh, literate, humane and insightful. The most trampled-over subject in musical theatre has come up sparkling.

Earlier this year Millar and Rutherford premiered The Hatpin, a large-scale historical musical based on a fascinating, and true, Australian story. We didn’t have to wait long for their next venture, the song cycle LoveBites. On the surface it may look like a far less ambitious project but this allusive, sophisticated and compressed art brings its own challenges.

Millar tells the story of six unrelated couples who are captured at the moment of falling in love. In the second half we see how it all turned out. There’s no scene-setting, apart from a series of beautifully chosen projections designed by Martin Kinnane, and no expository dialogue. Everything must be conveyed through song in the space of five or six minutes.

Within that tight timeframe Millar has created a set of persuasive individuals whose fate you want to know: Daniel and James from the poorly attended reading group; Madeleine and Poppy, whose courtship starts with the buying of a single flower; Annie and Kevin, whom disaster strikes in the form of a non-working loo.

At almost every point the detail feels vivid and truthful. It’s fun that Georgine has to pretend she’s an ace rock-climber when Peter first asks her out and that the heavenly Kevin works with deaf children. Obviously taken from life is the tryst between a famous film star and a flight attendant in an aircraft toilet, and yes, Ralph Fiennes is name-checked. Rutherford turns this into a breathy, torchy number, called The Captain’s Turned Off the Seatbelt Sign.

The composer gracefully lets the lyrics take centre stage but is sensitive to the needs and moods of each character. There’s wistful delicacy for Poppy in Give It to the Breeze and a buoyant, confident anthem for James and Daniel, Setting the Date. I was less convinced by the poo song that ends the show. It has an impeccable message but feels a bit try-hard compared with the rest of LoveBites.

On piano, Rutherford accompanies a hard-working cast of four, including Millar. The odd little Downstairs Theatre at the Seymour Centre has a hard, dead acoustic and even though they are miked there are times when Octavia Barron-Martin and Sarah Croser in particular sound under-powered. Millar and Tyler Burness fare much better but I hesitate to be definitive about the vocal qualities of any of them in these conditions. They play the show very well under Kim Hardwick’s nicely unobtrusive direction.

Sound quibbles aside, LoveBites is a very significant achievement. Music theatre aficionados take note: a team that can write Bob and Louise is one to treasure. The song captures a lifetime of longing, pain and quiet, ordinary desperation in just a few minutes, and I wasn’t the only one crying by the end.