The Australian Ballet doesn’t have an annual tradition of presenting The Nutcracker, although on present indications it could. The ballet doesn’t have as tight a grip on the public (or companies’ bottom lines) as it does in the United States but this year’s Nutcracker was pretty much sold out before it opened while other popular entertainments in Sydney are struggling.

TAB has two versions of Nutcracker in its repertoire. Graeme Murphy’s 1992 Nutcracker – The Story of Clara is a wonderful memory piece set during a hot Melbourne Christmas. For a more conventional take, TAB turned to Peter Wright’s 1990 Birmingham Royal Ballet version, giving the Australian premiere in 2007. Audiences loved it from the start, and it’s the Wright production currently packing out the Sydney Opera House. 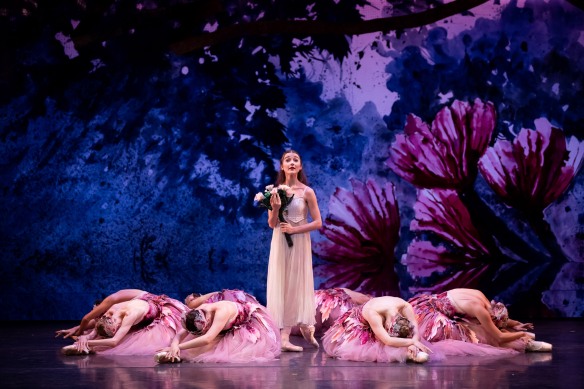 Benedicte Bemet as Clara in The Nutcracker. Photo: Daniel Boud

John F. McFarlane’s designs are delectable and are a huge part of the production’s enduring success. There’s inevitably a round of applause when a giant flying goose carries Clara to the Kingdom of Sweets and all the costumes, from Clara’s floaty white party frock to her mother’s spectacular red gown and the intense pinks and purples of the Flowers’ gorgeous tutus, greatly please the eye.

Wright plays a straight bat with the story. It’s Christmas Eve, the Stahlbaums give a party at which the magician Drosselmeyer entertains the guests with mechanical dancing dolls and a couple of tricks. Clara is given the gift of a Nutcracker doll, she falls asleep at midnight and the magic begins.

At 15 – the age is specified – Wright’s Clara is a little older than some. She’s by no means fully mature but has spark and a lively mind, brought to vivid life by newly minted principal artist Benedicte Bemet on opening night. A pivotal moment comes when the Nutcracker is transformed into the Prince at the end of the skirmish between giant rats and toy soldiers. He greets Clara with great courtesy; she views him with the wonder of a girl on the cusp of womanhood. One could say the Prince does very little here, except that he is opening the door to a world of life-changing growth and imagination. Senior artist Jarryd Madden was the epitome of grace and chivalry. He was less imposing in his grand pas with Amber Scott’s Sugar Plum Fairy, both dancing more correctly than radiantly. But ah, that earlier moment …

Other delights came with soloist Sharni Spencer’s all-conquering Snow Fairy and the appearance of TAB founding member Colin Peasley. He retired, sort of, when the company celebrated its 50th anniversary in 2012. Now 85, he played Clara’s Grandfather and looks to be on his way towards matching the late Frederic Franklin’s feat of taking small parts into his 90s.

One has to be happy that the Chinese Dance has been somewhat modified to remove the hideous finger-pointing and head-waggling that made it so distasteful but it really needs a complete overhaul. While it’s no longer insupportable, it is dull. Very, very dull. The slinky Arabian Dance, which presumably is supposed to conjure the sensual perfume of the mysterious Middle East or some such thing, could also do with a rethink.

There will be no Nutcracker next year, which is artistic director David McAllister’s last (an announcement on his successor is expected by April). Interestingly, he ends his reign with something of a gamble, a new production of The Happy Prince, based on the Oscar Wilde story. It opens in Brisbane in early 2020, will be seen in Melbourne in August and September and closes out the year, and McAllister’s tenure, in Sydney in November and December.

It wasn’t supposed to be that way. Choreographer Graeme Murphy was scheduled to deliver The Happy Prince this year but illness prevented him from completing the work and a quick shuffle ensued. Perhaps it was the universe speaking. A new Murphy ballet to end McAllister’s two decades at the helm of TAB completes a circle: the first ballet McAllister commissioned was Murphy’s Swan Lake, a huge success that was performed nationally and internationally almost every year for more than a decade.

The Nutcracker ends in Sydney on December 18.

EMMA Lippa is one of Australian ballet’s hidden treasures. She developed her formidable skills as an accompanist at the Bolshoi Ballet then used her gifts for two decades at the Australian Ballet. Lippa has retired from the AB but not from the piano or from ballet, as Queensland Ballet audiences were privileged to see at some performances of Elegance (her role was shared with QB company pianist Kylie Foster, who unfortunately I wasn’t able to hear).

Lippa’s musicality underpinned the most successful of the four pieces making up QB’s Elegance program, Ben Stevenson’s Three Preludes, choreographed in 1969 to the music of Rachmaninoff. Two dancers are first seen on either side of a ballet barre, at times reflecting each other’s movements as if they are taking daily class. This isn’t a new idea for dance but Stevenson’s take on it is beguiling. He sensitively creates an atmosphere in which boundaries dissolve. Two private, individual worlds melt into one as, slowly, an intimate relationship develops.

This restrained, glowing ballet is about love, but also can’t help but be about a love for ballet and music. In a short Russian documentary about her career, Lippa says a ballet accompanist “has to breathe with the ballet”, and this she did in eloquent, memorable readings of the Rachmaninoff.

American guest artist Carolyn Judson was alert and responsive while maintaining the work’s introspective quality, although she tended to smile rather too brightly. At times it was hard to concentrate on her, however, given the incredibly potent stage presence of QB’s international guest principal Huang Junshuang. He is tall, powerful, glamorous and a splendid partner. The man’s choreography is supportive – Junshuang leaves the floor only once for a low jete – as he tenderly looks after the woman, who is free to fly with the knowledge she will be completely safe.

Elegance opened with Ma Cong’s Ershter Vals (First Waltz), an attractive, folk-inflected piece for four couples that reminded me strongly of Nacho Duato’s Jardi Tancat. Ma Cong was born in China and danced with National Ballet of China and Tulsa Ballet before retiring recently to concentrate on choreography. He is now resident choreographer for the Tulsa company, but Ershter Vals, his most widely seen work, was made for Richmond Ballet in 2010.

Ershter Vals is danced to a selection of compositions by Italian group Klezroym, whose approach has been described as “new Jewish music”. In his dance piece Ma intends references to Jewish dispossession – the silent opening gives an atmosphere of unease and at times the women cover their faces as if they cannot bear to see – but Ma is more concerned with joy and resilience, seen in the constant and vibrant stream of action and interaction between individuals and groups.

The women (Sophie Zoricic, Eleanor Freeman, Mia Thompson and Teri Crilly on Friday night) looked lovely in the flow and sweep of the movement, in which highly expressive, swirling backs were important. The men (Nathan Scicluna, Joseph Stewart, Vito Bernasconi and Rian Thompson) seemed less comfortable with releasing their emotions and the repression of abandon detracted from the work’s undertow of loss. They were mostly too careful, although the spirit of the piece started working its spell towards the end, with Bernasconi particularly catching the eye.

Former QB dancer Gareth Belling’s Sweet Beginnings, to Vivaldi’s over-used Summer from The Four Seasons, was a disappointingly bland outing for three couples. The piece means to chart the life of a relationship in retrospect (a difficult idea to convey even for the most experienced of choreographers) but had little emotional heft. Belling uses classical vocabulary confidently enough but structurally Sweet Beginnings felt less assured, with the connection between the main couple and the two secondary couples failing to express as much as Belling does in his program note. Noelene Hill designed extremely pretty, long floaty skirts for the women but put the men into particularly ugly loose pants and tops that looked all the world like builders’ singlets. Principal artist Matthew Lawrence was definitely not seen to advantage.

It was good to have Vivaldi played live by the quartet Collusion, although intonation was an issue at several points.

On Friday Lina Kim’s vivid commitment was the main attraction of Sweet Beginnings and she also stood out in the upbeat closing work, Greg Horsman’s Verdi Variations. This tutu-fest is an often uneasy mix of humour and high classicism as former Australian Ballet and English National Ballet principal dancer Horsman simultaneously celebrates and sends up the art of which he was such a celebrated exponent. I certainly laughed, but didn’t like myself for it. The “isn’t ballet a funny old thing” approach diminishes the art to my mind. It’s not that there can’t be comedy in ballet, but when ballet itself is the butt of the joke it seems a bit self-defeating. The audience seemed to have lots of fun, despite their being rather too much untidy execution.

Among the pratfalls on Friday one could enjoy Yu Hui’s exuberant elevation and neat entrechats and guest artist Jenna Roberts’s calm assurance, gained from her Royal Ballet School training.

A native of Newcastle, NSW, Roberts is a principal dancer with Birmingham Royal Ballet who was making her professional debut in Australia on Friday. Verdi Variations, while a trifle, gave opportunities to enjoy her beautiful placement, unshowy but complete command of the stage and a most becoming understated radiance. Lawrence, who is Roberts’s former BRB colleague, partnered her with his usual grace, as he did with Lim in Sweet Beginnings, and his solo work was clean and assertive.

The season was brief – only five performances – but that was one more than had been intended, continuing QB’s happy situation of having to increase the number of performances of each of its programs this year.

The heavy workload for this relatively small company is, however, taking its toll. QB did not field any of its three principal women in Elegance nor was Hao Bin back on stage after an injury took him out of Giselle. The newly named soloist Lisa Edwards was also nowhere to be seen as she was also on the injury list.

Such situations, of course, give opportunities to more junior dancers (and to guest artists). QB has a large number of relatively inexperienced young men and women for whom stage time and exposure is necessary for their development. It was lovely to see Lina Kim shine. Overall, however, in Elegance only Three Preludes was a truly satisfying experience. Mature artistry will always trump eagerness.

This is an extended version of a review that appeared in The Australian on August 5.