Next to Normal, Doorstep Arts in association with Hayes Theatre Co, Sydney, January 15.

IF there is a choice to be made between darkness and light, musical theatre will tend to go for the latter. It’s just how it is. Indeed, Next to Normal, a musical in which the central figure suffers from bipolar disorder, ends on that note literally. The last lustily sung phrase from the ensemble is: “There will be” – big pause – “light”.

It’s an absurd, sentimental conclusion to a work that wants to have it both ways – to have dark subject matter but to end on a note of warm optimism. Next to Normal requires its audience to take an impossible leap of faith, based on the evidence the musical sets out before us.

Diana is a mother and wife who, in addition to being bipolar, struggles with anxiety, depression and episodes of delusion. Really, though, the key source of anguish is deeply rooted grief that Diana cannot or will not relinquish. 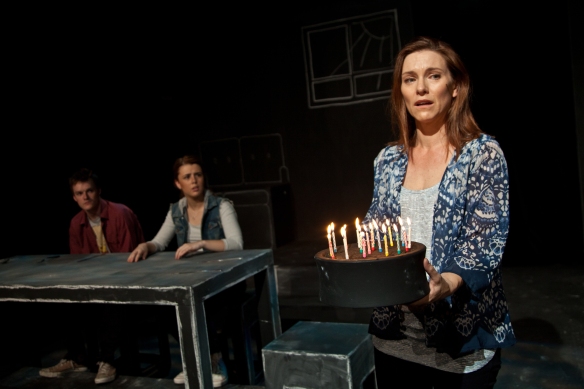 Natalie O’Donnell (foreground) in Next to Normal. Photo: Yael Stemple

This second thread gives Next to Normal its narrative twist and funkiest musical number (I’m Alive) but the intertwining of debilitating mental illness and personal loss feels manipulative. Brian Yorkey’s book and lyrics are undoubtedly sincere in intent but make no persuasive case. If there’s a platitudinous way to say something, it will be found. (Apparently “the price of love is loss but we love anyway”. Ugh.) Likewise, Tom Kitt’s music is generic rock-pop with a strong and regular beat and no great emotional complexity. As to the medical insights Next to Normal offers, the less said the better.

That it won the 2010 the Pulitzer Prize for drama is a mystery for the ages.

Nevertheless, Geelong’s Doorstep Arts does interesting things with the show and I particularly admired Natalie O’Donnell’s Diana. A set consisting of a few rostra and chalk outlines economically conveys Diana’s dislocation and O’Donnell’s warmth and raw honesty appeal strongly. The supporting cast of five works its heart out for director Darylin Ramondo (she could afford to dial down the energy level) and overall makes a good fist of this very flawed show. And I must say it worked rather better for me than did Melbourne Theatre Company’s 2011 production. So that’s a win for regional theatre.

While the little Hayes Theatre Co hosts Next to Normal, its smash hit from last year, Sweet Charity, has burst out of indie-land and started a series of top-end-of-town seasons. Its first port of call is the Sydney Opera House, where Dean Bryant’s production makes a raucous, confident move to the Playhouse stage. (One degree of separation: Bryant directed MTC’s Next to Normal.)

Crucially, Verity Hunt-Ballard is even more luminous this year than last as Charity Hope Valentine, the unschooled, trusting dance-hall hostess – okay, prostitute – whose sweetness and optimism are painfully tested at every turn.

Around her the production is louder and more garish (and The Rhythm of Life number still doesn’t earn its keep, no matter how much everyone loves it) but the clear-sighted vision that made last year’s incarnation so persuasive is still there. Charity may have knocked around a bit but she isn’t so hardened that she can’t be crushed. Sweet Charity originally ended with Charity shrugging philosophically and an assurance to the audience that she’ll keep plugging away with good cheer.

Hunt Ballard’s Charity offers no such comfort. When her dream of escape evaporates there is nothing but desolation.

There will not be light.

A version of this review appeared in The Australian on January 19.