IT’S no wonder Francesco Cavalli’s Giasone was the hit of 1649, the most performed opera of that year. The bigger mystery is why it’s rarely seen now. Giasone is a rousing, expertly constructed sex comedy that throws in low humour, high drama, a bit of magic and a love tangle of some complexity, including the wrong lover being chucked off a cliff. What’s not to like? 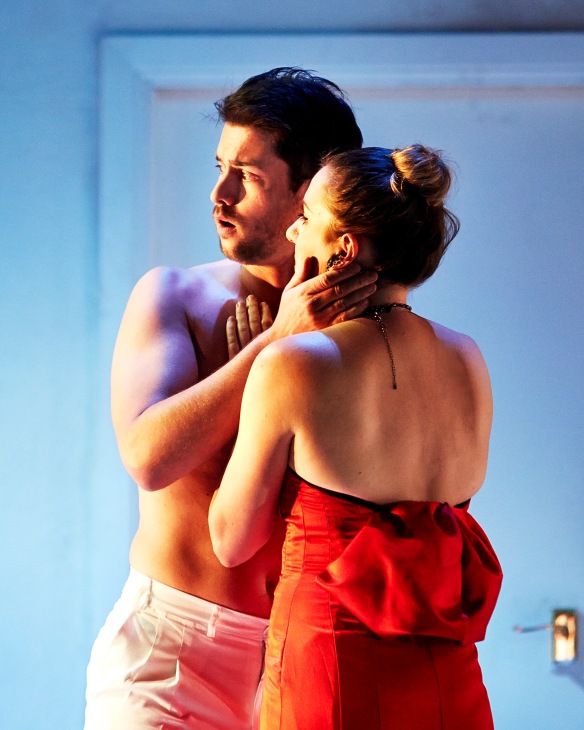 But there’s more: Giasone is underpinned by an affecting strain of deep, raw emotion, expressed in page after page of ravishing music. In Pinchgut Opera’s production – the Australian premiere – this dynamic score enchanted as much as it must have more than 350 years ago. A fine, well-balanced cast was headed by astounding countertenor David Hansen in the title role, the Orchestra of the Antipodes is in fine fettle, and if there was anything more joyous than the full-body conducting of Erin Helyard I hadn’t seen it in a long while.

You may know Giasone – Jason – as the hero on a mission to capture the fabled Golden Fleece, accompanied, of course, by his Argonauts. Alternatively, what first comes to mind may be the love-rat whose lack of constancy drove Medea to murder their sons. Giacinto Andrea Cicognini’s libretto for Cavalli takes a different tack. It is concerned with the fleece only tangentially and no children were harmed in the making of this work. Jason is, however, still a first-class love-rat.

Sexual passion is the driver of this plot and in the first minutes we hear of the female wiles that ensnare men, who are made helpless by their desires. Enter Hansen’s Giasone to sing Delizie e contenti, the dreamy aria aptly described by one scholar as an expression of “post-coital languor”. As Ercole (Hercules) comments, Giasone “never tires of giving”. Quite. Director Chas Rader-Shieber underscored the point by having Hansen appear bare-chested most of the time in circumstances where it may not have been entirely necessary from a dramatic perspective. Not to mention that we first saw Giasone taking a bubble bath while wearing nothing but his plumed helmet, attended by various of his Argonauts, also bare-chested. Yes, it was the tiniest bit Village People, but highly enjoyable.

Uncut, Giasone would take more than four hours to play, excluding intervals, although the music is so richly textured, varied and dramatically satisfying that you’d gladly hear it all. Infectious dancing rhythms, melting laments and lively comic numbers ease in and out of recitative seamlessly in Helyard’s racy reduction. It leaves out minor characters but essentially everything is there, and in not much more than about two and a half hours of music, which was directed superbly by Helyard from the harpsichord.

Rader-Shieber’s production was acted out on a simple but effective set, which he co-designed with Katren Wood. A couple of doors, a recessed chamber and some entrances and exits via the auditorium (these the least successful aspect) were sufficient to the task at hand. On one side of the ledger are the lower orders pragmatically deciding it’s most sensible to love the one you’re with. On the other, two queens battle almost to the death to win Giasone.

Sopranos Miriam Allan (Isifile) and Celeste Lazarenko (Medea) were a riveting pair of antagonists, representing the forces of constancy versus lust. Allan had some difficult tonal shifts, from down-trodden to majestic in her fidelity, and handled them with grace and clarity. Looking lovely in a long gown with a full skirt, Allan sang with purity and immense feeling.

Lazarenko was a compelling object of desire in her slinky red gown. While Lazarenko doesn’t have the ideal weight of voice for the exciting aria Dell’antro magico, in which Medea summons supernatural help for Giasone, she was otherwise fascinating, singing with sensuous warmth.

Giasone is a far from admirable character, not even winning the fleece through his own powers as Medea’s other-worldly contacts help carry the day. Hansen’s advantage was his stratospherically high countertenor, which gleams brightly and pours out with voluptuous ease. With that at his command he managed to ingratiate, even if you never quite believed these women would give up everything they hold dear for him. He was affecting in Giasone’s 11th-hour volte face, one of those moments similar to the Count’s capitulation at the end of The Marriage of Figaro.

The City Recital Hall provided the happiest of spaces for all voices. The supporting cast members offered enjoyably vivid characterisations, particularly Christopher Saunders as the blustering, stuttering Demo and Andrew Goodwin as the noble and nobly sung Egeo. Adrian McEniery had a few wobbly moments vocally as Delfa but was in amusing cross-dressing form as he rocked a pink Chanel-style suit and pearls. David Greco’s Oreste and Nicholas Dinopoulos’s Ercole most ably played the part of long-suffering supporters to their betters as did young Alexandra Oomens, in prettily fresh voice as the attendant Alinda.

The story, absurd though it is on the surface, is touchingly truthful and universal in its understanding of how love binds, pains and deceives. The production adds more well-deserved laurels to Pinchgut’s brow. And it’s splendid news that next year will bring a second opera from this wonderful company.