MOTHER Courage is one of the little people, born somewhere undesirable at the wrong time. A war she didn’t have anything to do with starting grinds on, stops for a bit and then starts up again. What’s a woman to do? Mother Courage goes on to the front foot. As a Yorkshireman might say, “where’s there’s muck there’s brass”. That’s a 20th-century saying but apparently there was a 17th-century English proverb that covered pretty much the same ground. Wherever there’s unpleasant work there is money to be made. Certainly where there is destruction on a grand scale many people will lose everything. But some people make a lot. Consider, for instance, KBR Inc, a former subsidiary of the well-connected company Halliburton, which received US government contracts worth nearly $US40 billion for work relating to the Iraq war. Mother Courage works on a rather less elevated level, hanging around the fringes of conflict with her wagon, selling a bit of this and a bit of that. She makes a living. (That phrase takes on some piquancy when used in relation to a war zone.) 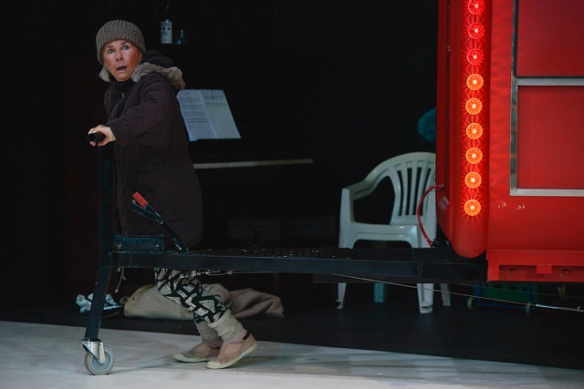 Brecht set his play during the cataclysmic Thirty Years War that occupied a substantial part of the first half of 17th-century Europe but its story is imperishable. Kingdoms and principalities may come and go but war is a sure thing and so are the profits that go with it. Brecht’s war isn’t the clash of bodies and armaments and a little touch of Harry in the night; it’s the one that runs parallel with it, the one that feeds off the fighting while feeding those who fight, and possibly keeps it all going longer than it might otherwise. Who can possibly say?

As John Willett writes in Brecht in Context (Methuen, 1984), “Brecht does that seemingly simple thing which his often mystifying theory of alienation is intended to make possible. He takes a new look at a familiar area, and by so doing he suggests to others how they too can look at it afresh.” In other words, we need to be able to see things doubly – in the light of deeply ingrained beliefs but also with a mind open to new and perhaps strange ways of perceiving. Things are rarely as cut and dried as black hats versus white hats.

Mother Courage – the character – brilliantly embodies the kind of duality that’s constantly shifting. For every good quality she displays there is evidence of its opposite. She is funny and grim, brave and cowardly, generous and venal, protective of her children while failing to protect them, open to a spot of romance and hard as a nut, and on it goes. Is she really courageous or a vulture opportunistically picking at whatever bones come her way?

Under Eamon Flack’s direction for Belvoir, Robyn Nevin shows you all this in a riveting performance that feels perfectly true to the intentions of the work and the process of conveying it. I came across the following when reading Eric Bentley’s The Theory of the Modern Stage (Penguin, 1968) and it resounded greatly. This is Brecht on his wife Helene Weigel, saying that she had learned to let attention “move away from her, the actress, to the content: to what was enacted … never did she set out to show her own greatness, but always the greatness of those whom she portrayed.” (Translation by John Berger and Anna Bostock.) Weigel was the first Mother Courage.

Flack has also been very astute in the selection of supporting actors. It’s true that Belvoir has an increasingly good record of looking beyond performers who match the predominately white audience, but here the casting has particular bite. (Most people don’t notice absence. It’s why for aeons there were female directors were incredibly scarce: male artistic directors just didn’t notice they weren’t there. People get used to seeing people who are like them and assuming all is right with the world. It’s not a state particularly conducive to creative thinking.) In Mother Courage the diversity of the actors’ appearances forces you to attend just that little bit more actively. A Kattrin whose work we are already familiar and therefore comfortable with? A young woman who looks rather like a young Nevin? Too easy. Newcomer Emele Ugavule was an inspired choice and she is unforgettable as Mother Courage’s daughter, her muteness explained in one terrible throwaway line that efficiently covers the kinds of things that happen to young women during wartime and demonstrates Mother Courage’s practical acceptance of it. 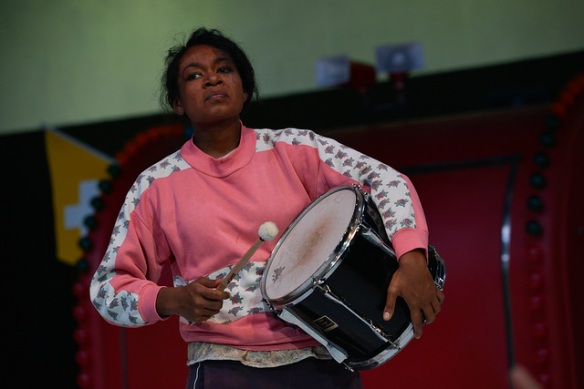 The production is a bare-bones one, clearly in a theatrical setting although not one with lots of bells and whistles. It is modest in its means and that modesty becomes it. It is particularly endearing, for instance, that while the evidence suggests Nevin’s exceptional gifts do not extend to singing and dancing, she does these things nevertheless. This play – this production – can incorporate gear shifts such as this that make one smile. (Paula Arundell, on the other hand, lends considerable vocal skills, along with a sizzling, gleeful presence, to the role of Yvette, another woman who uses what she has to get by.)

The ideas come through loud and clear in Michael Gow’s strong, clear translation and in the hands of all the actors. But then what? Horace Walpole comes to the rescue (as do my long-ago drama studies at the University of Newcastle). Walpole wrote that the world was a comedy to those who think and a tragedy to those who feel. Same thing, different outcomes. If you didn’t laugh you’d cry, and all that.

Mother Courage chooses to laugh, if you like. We can choose to cry, if we want. We can do both.

Mother Courage and Her Children has one of Western theatre’s indelible endings. There are no children left after a brief breakout of peace has been stamped out by a resumption of hostilities, but Mother Courage does not crack. She stands in front of her wagon, hoists up the shafts and starts pulling. In Nevin’s face I saw stoicism and determination mixed with dread, or at least that is what I believe I saw, which amounts to the same thing. The defiance is thrilling and terrifying. Who amongst us would have her guts in such circumstances?

Mother Courage and Her Children was written just before the start of World War II and first produced in 1941, in Zurich. Did Samuel Beckett, writing (in French) in 1948 learn something from this dogged expression of the will to endure? Certainly another of Western theatre’s indelible endings expresses a similar spirit.

Vladimir: Well? Shall we go?

They do not move.

Staying, going, surviving, whatever it takes. Would we do any better?