The short Sydney Festival season of Stephanie Lake’s Colossus has ended but the show is by no means over. Next month it will be seen at the Perth Festival and very likely beyond. Lake has said there are possible international engagements to come. Colossus premiered at the Melbourne Fringe in 2018 and last year featured in the Melbourne International Arts Festival program. This, obviously, is what gets known as a festival piece; something ambitious that needs the resources of a large organisation behind it. Colossus was choreographed for more than 40 dancers. No further explanation is needed. Well perhaps a little explanation. Colossus is usually described as having 50 dancers but it’s a handful fewer according to the cast sheet.

Whatever the number, it’s a lot. It’s rare to see an independent choreographer have the luxury of such forces at her disposal, although Lake has previously shown she can handle them. Her terrific piece for Queensland Ballet’s 2017 Bespoke program,  Chameleon, proved that. Not that she’s any slouch with small forces either, as Double Blind showed in 2016.

Colossus starts in stillness. As the audience enters the dancers are already present, lying motionless on their backs, arranged in a circle. There is a thunderous clap and scores of arms and heads are raised in unison. Energy transfers from Robin Fox’s heartbeat-like score to the bodies and from one body to the next. Everyone is part of the pack, a separate being and at the same time a collective entity, like a flock of birds in flight or a herd of zebra on the move, the one member of the group always knowing where the others are in relation to themselves and acting in concert.

Their black attire looks self-effacing against the bright white surrounds and even though each costume (designed by Harriet Oxley) is different – a dress here, shorts there, meshes, cutouts, straps and so on – the overwhelming sense is of anonymity. Yes, some figures are taller, shorter or more muscular than others but one will never really know these people, even when Lake pulls a single person or a couple from the mass. They emerge and are then subsumed. 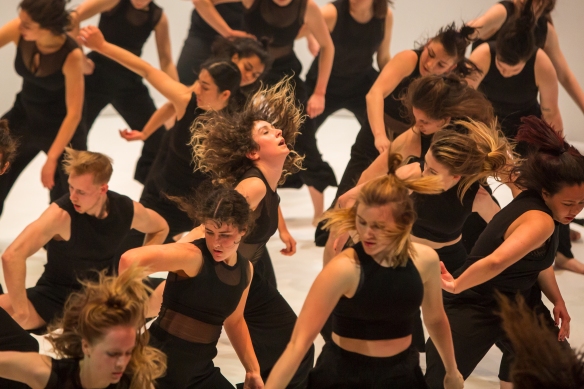 The Melbourne cast of Colossus. Photo by Mark Gambino

Several times Lake’s formal organisation of dancers into circles and lines explodes into a kind of chaos one could perhaps designate as freedom, but it looks as chilling as Colossus’s highly structured mass movements of people obeying disembodied instructions, ferocious marching, a mob chasing one person.

Lake does allow a few flashes of independence. In one brief section in the middle of this 50-minute work the dancers suddenly break ranks to mingle and chatter amongst themselves, as if taking a short breather. It’s a reminder that they are indeed human, doing what comes naturally, delightfully relaxed and cheerful. And as the piece nears its end, with the simplest of means Lake changes the atmosphere to one of understanding and acceptance within the group and, finally, individuality.

The Melbourne cast of Colossus. Photo by Mark Gambino

Integral to this optimistic conclusion are Fox’s sound design and Bosco Shaw’s eloquent lighting. Fox’s electronic scores are often uncompromisingly tough and spiky. Here there’s a more human quality, particularly in the incorporation of the dancers’ breathing and the percussive possibilities of their bodies. From Shaw there is a design that from time to time softens the harsh glare of black versus blinding white with illuminations that throw ghostly shadows. It’s a beautiful effect, but more than that. It speaks of the spirit within, no matter how oppressive, regimented or controlled life may seem.

Bonachela/Nankivell/Lane ushers in Sydney Dance Company’s 50th anniversary celebrations with three works that foreground the dancers. There are appealing but unpretentious costumes and no sets. There are bodies in motion, music and lights, although perhaps a few more blackouts than desirable on one night.

The relative simplicity could be seen as offering a too-limited palette or a strong organising principle, depending on taste. What isn’t open to question is what makes the biggest splash on the program.

As it did when first seen in 2017’s New Breed season, Melanie Lane’s WOOF sweeps all before it. Who knows what the title means? Who cares? Now a touch longer, WOOF ends well before you want it to, testament to its appeal. It gets the job done in 26 minutes and they whizz by as if half that.

WOOF is futuristic in tone and has some kinship with Anne Washburn’s play Mr Burns, which uses The Simpsons as a uniting force in a post-apocalyptic world. Lane’s touchstones are Renaissance art, classical ballet and contemporary clubbing, mashed together as 12 women and men group, splinter and regroup to a score by Clark’s score that starts with cello and inexorably goes digital.

Even at its most eccentric – that would be the hip-swivelling prancing on demi-pointe – WOOF has glamour to burn. No one in the cast exemplified that more on opening night than Chloe Young, haughtily swishing her long, blonde ponytail.

Lane’s vision doesn’t encourage individuality and emotional connection but it is impossible to remain unmoved by her final, transcendent image. Verity Hampson designed the marvellous lighting and Aleisa Jelbart the costumes that slowly take on humanising messiness as blacking on the dancers’ arms and hands transfers itself to their bodies.

Opening the triple bill is Gabrielle Nankivell’s Neon Aether, a trip through space set to Luke Smiles’s fabulously clanking, whooshing, beeping score. A woman dressed in red (Harriet Oxley designed the costumes) is the enigmatic central figure in a piece that evokes the vastness of the universe and our need to engage with it.

As with WOOF but with entirely different atmospherics and dynamics, Neon Aether shows groups of people gathering and scattering. Some watch others from the shadows; sometimes all are together as a vulnerable group of individuals; at one point all join hands and circle – an image that never fails to summon thoughts of connection and safety. There is overall, however, a strong sense of vulnerability. Ariella Casu seared herself into the memory as the woman in red, alone at the end in hazy light, buffeted by cosmic forces.

While WOOF and Neon Aether encourage some degree of narrative speculation, Cinco is entirely abstract in nature, foregrounding the shapes dancers make, their relation to one another in the space and light and the ways in which movement and music interact. There’s a spectacular solo that, on opening night, displayed Charmene Yap’s creamy plasticity and fierce extensions. But all five – the others on opening night were Davide Di Giovanni, Holly Doyle, Riley Fitzgerald and Chloe Leong – were immaculate.

Nearly half the 19-member company is new this year, not that it shows. The look and feel are indisputably Bonachela’s SDC. He knows how to pick them.

Ends April 13. Canberra, May 2-4; Melbourne, May 8-11; tour to centres in Victoria, Northern Territory, South Australia and Tasmania, May 16-August 17.

A version of this review appeared in The Australian on March 29.

WHAT a rich, diverse evening this is. Sydney Dance Company’s Interplay offers three works, any two of which would have given a stimulating experience, but who’s complaining? Each makes a strong appeal to a different human need and shows the SDC dancers in shape-shifting, magisterial form.

Rafael Bonachela takes on Bach’s Violin Partita No. 2 in D Minor for an intellectually challenging engagement between movement and music; the second new piece, Gideon Obarzanek’s L’Chaim!, has heart and joy; and the revival of Jacopo Godani’s Raw Models – well, that gives the libido a workout.

Violinist Veronique Serret plays for Bonachela’s piece, called 2 in D Minor, planting her feet firmly on the stage and engaging fiercely with the dancers. Also on the program is new music from Stefan Gregory (invigorating, rhythmic tunes for L’Chaim!) and Nick Wales (intriguing electronic miniatures that act as contemporary interludes for in 2 in D Minor, based on Serret’s playing). This is a big, big show.

Bonachela’s piece doesn’t always rise to the complexities and nuances of Bach but has many luscious moments, particularly in sections involving Charmene Yap, David Mack and Cass Mortimer Eipper. On Monday night Yap embodied the music with alert, sinuous grace, frequently making eye contact with Serret, and Mack and Mortimer Eipper’s closely intertwined duo in the first movement also gave the sense of bodies merging with the music and emerging from it.

There was a fine contrast in the second movement, Corrente, when Fiona Jopp’s lively solo was more external: a performance bubbling on top of the music.

As the piece progressed some of the dance material and structures lost their juice when familiarity set in. The solo interludes between movements were the surprise element, with white-clad figures offering present-day, somewhat anguished homage to Bach. These interpolated pieces were danced on a square of light on the stage, mirroring the skylight-like light that hovered above the Bach movements. (Benjamin Cisterne created the set and lighting.) I couldn’t help but think these little dances referred to the noble struggle involved in living up to the genius of Bach.

When Raw Models premiered in 2011 I was struck by the various meanings of the word model it evoked: fashion, mechanical device, computer modelling. This time the piece felt a little different. Overall there isn’t quite the level of chic and haughty sheen the original cast brought to it but it is still very sexy. The ripples, poses and elongations of seven dancers dressed in skin-tight black bring to mind the enacting of a creation story or perhaps, given the gloom and frequent blackouts, rebirth from a catastrophe.

Whatever it is, it’s happening in a galaxy far, far away. These superb physical specimens may look human but could well be aliens from the planet Glamour Major. The opening night crowd went wild, particularly (and rightly) for Yap’s knockout duo with Andrew Crawford, a man with the wingspan and presence of a golden eagle, both of which he puts to excellent use in Raw Models.

Where Raw Models demonstrates the vast gulf between elite performers and their audience, L’Chaim! seeks connection. Folk dancing is the choreographic impulse and the illustration of community. A disembodied voice (that of actress Zoe Coombs Marr, text is by David Woods) asked company members questions – some banal, some impertinent, some useful – about themselves and what they felt about dancing. The idea is an extension of a long-running interest Obarzanek has in why people dance and what dance means, and there is a work of greater depth there for the taking. Nevertheless L’Chaim! is already an endearing addition to the inquiry. 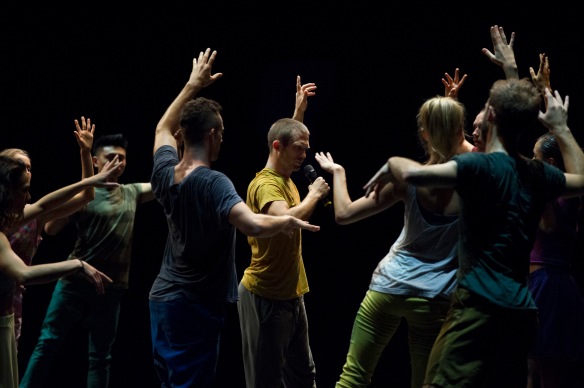 Wearing a motley array of ordinary clothes in a nondescript space (costume Harriet Oxley, set and lighting Cisterne) the full SDC company beautifully illustrated how highly trained bodies can move in ways denied the rest of us. Then, as they almost imperceptibly let go of their technique, they movingly showed how a civilian may be absorbed into the dance.