Yang Liping’s exquisite Under Siege is like the richest of sauces, distilled and reduced until only the essentials remain.

The setting is China about 2000 years ago as one dynasty, the Han, bloodily replaces another. Yang’s episodic, impressionistic work strips away the immensely complicated politics to arrive at a truth as old as time and new as today. Two men with great resources at their command vie for power. One wins; the other dies.

The situation could not be more stark nor the depiction of it more sumptuous. The senses are ravished by a heady mix of contemporary dance, martial arts, traditional Chinese music, Peking Opera and poetic set and costume designs by the masterly Tim Yip. 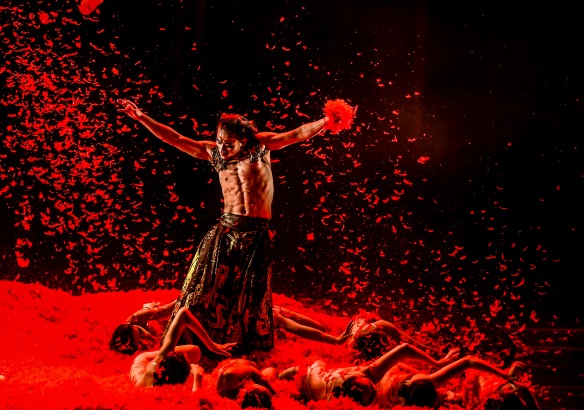 Hanging over the stage is American-Chinese artist Beili Liu’s shimmering forest of scissors, inspired by her installation The Mending Project. Hundreds of blades in undulating rows glint in shades of grey and gold as lights play on them. The cutting imagery is echoed by a woman who sits at the side of the stage throughout the performance, fashioning huge Chinese characters from mounds of white paper and holding them up to announce characters or scenes. In Under Siege beauty and death are close companions.

Anonymous combatants clash forcefully and whirl through the air excitingly but are also capable of great delicacy in gliding runs and undulating spines. Their affiliation isn’t clear but it’s not important. A soldier is a soldier. On which side doesn’t matter.

The real action lies with a small group of individuals to whom Yang gives distinctively different movement qualities. Most unforgettable is the concubine Yu Ji, danced by Hu Shenyuan – a man – with extraordinary fluidity and sensuality. For Yu Ji’s first solo Hu is almost naked, quite clearly a male dancer in keeping with Peking Opera tradition but without any of the trappings that might make him appear to be impersonating a woman. Yu Ji is deeply attached to the aristocratic, charismatic Xiang Yu and her fate is bound to his completely. Hu’s plasticity and refinement are enthralling, otherworldly even, and yet lucidly convey this worman’s interior life.

Later, dressed in red, Yu Ji has heart-catchingly tender duets with her doomed lover, danced with much dignity and almost magical physical powers by He Shang, whose standing backflips are performed without apparent preparation. The stockier Gong Zhonghui plays his adversary, Liu Bang, with earthier traits that are sometimes close to buffoonery but with a dangerous edge. A general, Han Xin (danced by Xiao Fuchun), is described as unappreciated and his divided loyalties are shown literally when he is given a sinister, black-clad doppelganger (Ou Yangtian).

Guo Yi’s magisterial narrator speak in the swooping tones familiar from Peking Opera and even when it’s clear he has rather more to say than the surtitles offer, his presence is compelling. On the subject of surtitles, they give a welcome assist to non-Mandarin speakers and those not entirely familiar with Chinese history. (When Under Siege was performed in London last year this help wasn’t available. Much criticism ensued.)

It’s still a good idea to do a little bit of homework to get full value from Under Siege. Or you can sit back and let this extravagantly beautiful, intoxicating experience take you wherever it will.

A version of this review first appeared in The Australian on September 29.