A wrap of dance seen at the 2017 Sydney Festival …

The flick of a long rope sends energy snaking through it. It passes a man standing uneasily in the centre of the stage and his head recoils in response. Later, all seven performers in Spectra link arms and undulate them as if possessed of a single but multi-parted body. In an earlier, entrancing encounter the group is tightly knit and close to the floor, pulsating as if impelled by a single set of lungs.

All this is exceptionally lovely, as are many of the solos, duos and trios that emerge, dissolve and are reabsorbed in this collaborative, introspective work from Townsville-based Dancenorth and Tokyo Butoh company Batik. The movement language mixes Western contemporary athleticism with intense, sculptural Butoh formality and at any given moment there is something to please the eye greatly as the dancers share the space with artist Matsuo Miyajima’s glowing light installation and Niklas Pajanti’s evocative lighting design.

The governing principle of Spectra is the understanding that everything is connected. Do one thing and something else will happen; decide on a course of action and there will be a consequence. Spectra examines this idea fully and clearly in a physical sense through the interaction of bodies, light, ropes and the live music of Jiri Matsumoto. It’s less successful in making a connection between the cerebral universal and the human particular. There is, for instance, a trio of some agitation for Misako Tanaka, Rie Makino and Amber Haines that probably should evoke compassion but stays resolutely distanced. 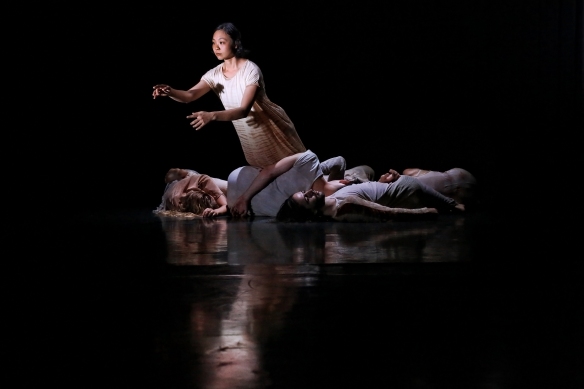 Makino is something of a focal figure and features in a late section that has the hallmarks of a satisfying ending as she reaches towards something unseen and unknown. There is the welcome possibility of empathy with her but attention then shifts to another scene, again very visually effective, in which the group coalesces and then dissolves. That could also be an ending, but it isn’t. There is a bit more to come. The ultimate impression is of an elegant set of variations on a theme in which individual parts don’t absolutely depend on one another. The structure somewhat undermines the “if this, then that” thesis.

Despite these reservations, it was a great pleasure to see Dancenorth in Sydney. The company is based in the Queensland city of Townsville, 1300km north of Brisbane, but the small, agile outfit doesn’t let distance fence it in. Under its young artistic director Kyle Page it is a whirlwind of new works, touring and research and it collaborates with some of the country’s best-known choreographers. Spectra premiered at Adelaide’s OzAsia festival about 15 months ago and has been seen in Japan. Even if it’s not as gripping as its potential suggests, it is a thoughtful and serious piece.

Page choreographed and directed Spectra with Haines, who is Dancenorth’s associate artistic director. The multitasking Page continues to dance and is charismatic in Spectra, as is Haines. Makino is a commanding presence and Jennie Large, Mason Kelly, Josh Mu and Tanaka make up the strong ensemble.

Being human is undeniably a messy business. Less certain is how Circa’s messy new show illuminates our shared condition – what Circa describes as “what it means to be human and … how our bodies, our connections and our aspirations all form part of who we are”. It’s a broad subject that could really mean anything, or nothing.

Humans is one of the company’s stripped-back pieces. There’s limited use of apparatus and the concentration is on what 10 superbly honed athlete-artists can do with the body. It’s a lot.

Four women and six men throw themselves through the air in various ways, balance on each other’s shoulders, bend like molten steel and bounce back with the casual elasticity of toddlers. At one point a woman goes for a stroll across the heads of five standing men. It’s terrific.

There is energetic throwing and catching, impressive feats of strength and some counter-balancing that was a bit shaky on Saturday but nevertheless lovely. Towards the end of Humans there is an unusual trio on aerial straps, beautifully choreographed and performed. There is no safety net.

In all this we see the qualities essential for this kind of work: trust, strength, physical courage, burden-sharing, the power of the group. They are, however, a given in this kind of circus and without them there would be no show. More is needed if the civilian audience is to make the connection between an exciting display of superhuman skill and the mysteries of life.

Circa is deeply committed to the expressive power of circus, which is why it is so greatly admired here and abroad. Something, however, has gone awry in Humans. The tone is inconsistent and at several points disturbing and perplexing. What does Circa intend when a woman is swung around like a skipping rope or walked around the space like a zombie puppet before dropping to the floor as if dead? The audience at the performance I attended cheered the first action and tittered nervously at the second.

The ooh-ah exhibitions of prowess, a bit of portentous walking about and some jokey interplay between performers fail to prepare the ground adequately for this darker material.

A fun section has the women and men of the ensemble attempting to lick their elbows to the strains of The impossible Dream. It deftly puts performers and audience on the same level and the laughter of recognition on Saturday was hearty and genuine. Otherwise, Humans misses its mark almost entirely. The performers could not be less like us.

Company 605 is a Canadian collective dedicated to a shared creative process, shared language and what it calls “a relinquishing of control”. The group, it would seem, is always far more important than the individual. There is no one choreographer or director for Inheritor Album, which is credited to Company 605 and the dancers are dressed casually and similarly.

Presumably this democratic ethos is what impels Inheritor Album’s performers to move mostly in unison. There are several solos and a couple of moments when just two people are on stage but the group is what really matters. A united front is the default position and even when dancers touch one another, which isn’t all that often, it feels familial rather than sensual.

The fact that three men and three women perform Inheritor Album is neither here nor there. There’s nothing as obvious as pairing off according to conventional gender roles as the six throw themselves with equally impressive vigour into the punchy choreographic language of running, swirling, rolling, tumbling and the stop-start shapes of street dance.

Not that everyone is required to do exactly the same thing in precisely the same way. Timing is a bit loose, there are different body types on stage and personal style asserts itself naturally. Sometimes an individual will break away for a moment or two and occasionally there’s a whiff of competitiveness or combativeness.

Nevertheless, there is an inexorable return to the stability of the pack. The atmosphere is intense and a little bit mysterious. Only right at the end do the dancers give the impression of enjoying themselves; for the most part Inheritor Album wears a distancing cloak of great seriousness.

The Album part of the work’s title refers to the half dozen or so discrete sections in the dance, which are accompanied by Kristen Roos’s standard-fare industrial sound design, Miwa Matreyek’s elegant animated projections and the crepuscular lighting design by Jason Dubois.

The Inheritor part is less easily grasped. The program note speaks of transition and transformation but the constant reversion to unanimity works against that idea even as the restless energy of the choreography suggests a desire for something new.

The Champions program quotes Dutch soccer great Johan Cruyff as saying “dancers are the cleverest with their feet, next are footballers” and in Cruyff’s obituary last year The Guardian wrote that he “treated football as, above all, an excuse for exercising creativity”.

It goes without saying the beautiful game translates easily into dance and Champions does it with much dexterity and a generous heart. It’s like a “friendly” between sides that share a common language but speak with a different accent. 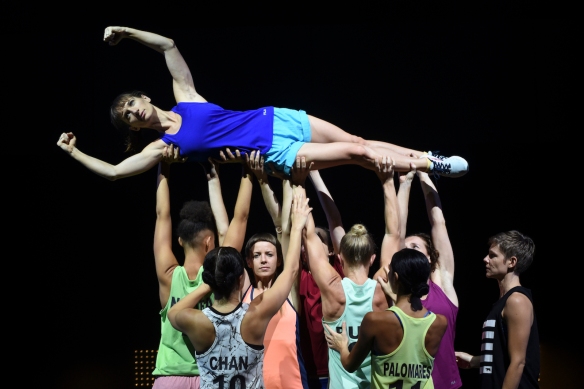 Early in the piece images of graceful training routines and complex game formations dominate. In the second half the mood becomes more reflective. Emotional gestures of triumph, solidarity and anguish are seen in plush slow motion on designer Clare Britton’s field of vivid green and danced to Gail Priest’s music, a score in both senses of the word.

Sound serious? Champions is, up to a point. It has things to say, admittedly in the work’s least sparkling section, about the vast disparity in pay between male and female sportspeople in general and the Socceroos and the Matildas specifically. It celebrates with equal fervour the extraordinary physical and technical skill of top-notch dancers and footballers and I loved that simply by putting the dancers’ names on the back of their shirts in football style, Champions pays them an honour they don’t often get – that of recognition.

The performers (11 of them, obviously, plus a substitute) are some of the country’s most formidable contemporary artists and include Kristina Chan, Sara Black, Miranda Wheen and Kathryn Puie, all of them alas rather less well known than they should be in the wider world.

Director Martin del Amo came up with the concept and devised the text and choreography with the dancers. He describes himself as an avid sports fan but he’s also a witty man who could see the comic potential in blending the worlds of soccer and contemporary dance. You want statistics? Champions can tell you everything you wanted to know and much that you didn’t about these women. If you’re quick you might notice the “affairs with a fellow performer” stat.

TV commentator Mel McLaughlin has a key role, applying the conventions of sports media coverage to dance in a series of filmed interviews and assessments presented before, during and after the performance. Is it true that the Palomares sisters, Marnie and Melanie, have a strained relationship (allegedly)? Is Chan getting a bit too old for the game at 37?

And what about the tumbles a few of the women took in the first half? A bit of a shame, comments McLaughlin. Not exactly, Carlee Mellow explains. That was choreography. A lot of fun too.