Septime Webre’s ALICE (in wonderland) was made in 2012 for Washington Ballet, where he was artistic director from 1999 to 2016, and shortly after was snapped up by a host of regional American ballet companies. Hong Kong Ballet, which Webre now leads, staged ALICE last year. Now West Australian Ballet has dived down the rabbit hole.

WAB likes to end the year with a ballet suitable for young audiences but has resisted an annual Nutcracker, opting to stage it every second year. ALICE hits the spot as an family-friendly alternative, and how. It’s a visual extravaganza in all departments – Liz Vandal’s witty, sumptuous costumes are a knockout – and Webre pours out endless streams of lively, inventive choreography dispatched with easy charm by WAB. 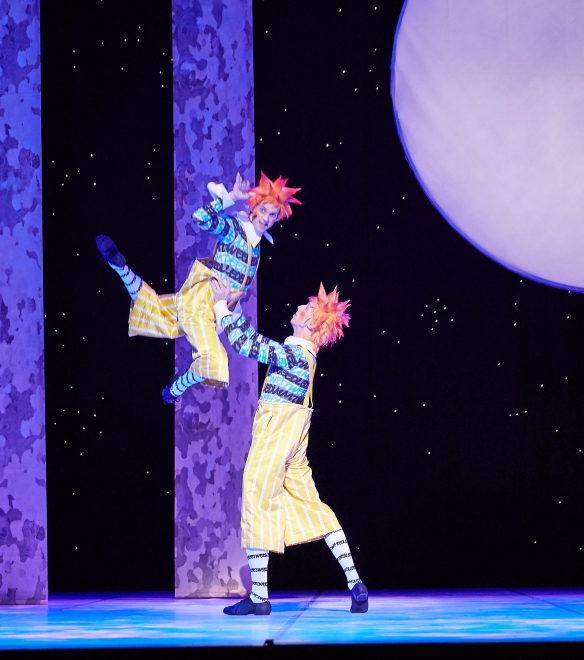 Webre enjoyably throws just about everything at the wall and just about everything sticks. Tweedledum and Tweedledee float through the air on their bicycle built for two, the Caterpillar turns into a gorgeous butterfly and Alice grows so tall she nearly disappears beyond the audience’s view. Dodo and Eaglet entertain with an abbreviated, wacky version of a big classical ballet. The Cheshire Cat not only gets close and smoochy with Alice but proves a dab hand at complicated partnering. The Mad Hatter is a turbo-charged explosion in a paint factory and the White Rabbit twinkly-eyed and twitchy as he dashes in and out of the mayhem.

Crucially, it doesn’t matter if there’s close familiarity with the source material or not. It’s enough to know that a bookish young girl has entered a world of wild imagination in which anything may happen, and does at dizzying speed. Those who do know a little something, however, will find extra enjoyment. There’s a brief scene, for instance, in which Alice and Lewis Carroll take a little boat ride – a reference to the day in July 1862 when Charles Dodgson (Carroll’s real name) invented surreal adventures to entertain Alice Liddell and her sisters as they went rowing on the Isis near Oxford.

Children will delight in the technical wizardry and super-saturated colour palette but Webre also smartly gives a nod and wink to the adult audience. Let’s put it this way: the Queen of Hearts is probably up to no good with her bare-chested retinue of young men and the Cheshire Cat is a rather sexy beast. His growling, purring music is huge fun.

Matthew Pierce first wrote his specially commissioned score for strings and percussion only, given the small forces at his disposal. The music was later fully orchestrated for Oregon State Ballet and has been further revised for WAB. Jessica Gethin and the West Australian Philharmonic Orchestra gave it a cracking performance on opening night.

Not surprisingly, the full-orchestra version is Webre’s preferred option (although it’s one not available to many small US companies). Interesting percussion accents and colours are still an arresting feature of the score but it also now has the shine and weight of brass and the gorgeous sonorities of wind instruments. It’s invigorating writing that illuminates the storytelling at every moment.

But no matter how lovely the music, or how spectacular the effect of Vandal’s costumes, James Kronzer’s sets, Clifton Taylor’s lighting and Eric Van Wyk’s puppetry, there is no show without Alice. She is onstage a lot and is the connecting tissue in a piece that darts from one thing to the next like a humming bird. WAB principal artist Chihiro Nomura was a sparky, animated opening-night Alice, her face beautifully expressive. It was good to see her in a new light; Nomura can seem a little too restrained at times. Much is asked of Alice and Nomura delivered with effervescent acting and seamless integration of Webre’s classical/contemporary movement mix. And she has to fly. Hats off.

WAB is a medium-sized company of 35 dancers (including six young artists) but looks big and bold here. There are splendid parts for a great many dancers, all of whom made opening night go off like a rocket. Juan Carlos Osma’s jaunty Mad Hatter, Julio Blanes’s bouncy White Rabbit and Matthew Lehmann’s insinuating Cheshire Cat were all strongly individual while Alexa Tuzil negotiated the Caterpillar’s seriously twisty choreography with calm poise.

Webre’s mini ballet in the middle of the first act is a touch too long but gives the hard-working Alice some off-stage time and the audience a taste of strong classical technique. And it is undeniably fun in its allusions to the second act of Swan Lake, with flamingos standing in for swans. There’s even a quartet, with Pierce briefly but unmistakably quoting Tchaikovsky’s cygnets music. Oscar Valdés (Dodo) and Dayana Hardy Acuña (Eaglet) were the stars of this show within a show and they were on fire. Valdés also had to back up in the second act as the virtuosic Joker (as in the pack of cards), dancing up a storm and looking most rakish with his soul patch.

His Majesty’s Theatre, Perth, September 13 and 14.

Was there ever a man who said his life’s ambition was to dance Hilarion? Probably not. He is the spurned lover in Giselle, a gamekeeper who can’t match the allure of his rival, aristo-in-disguise Albrecht. Hilarion offers dead birds to Giselle’s mother to shore up his position; the experienced Albrecht blows sexy kisses and ingratiates himself with Giselle’s friends.

So yes, Albrecht has all the glamour but who Hilarion is, what he does and what he feels is vitally important to the progress and texture of the drama. The same goes for all other secondary figures. The detail is where a company can make this much-performed, much-loved work sing.

Aurélien Scannella and Sandy Delasalle’s staging for West Australian Ballet retains the usual scenic framework and much of the traditional choreography attributed to Coralli and Perrot, albeit with a few tweaks, while new touches to character and movement make the ballet WAB’s own. The production, first seen in 2014, looks lovely. Peter Cazalet’s design is appealingly modest in scale and Michael Rippon and Jon Buswell’s lighting a thing of beauty, particularly in the second act, which opens with a shaft of moonlight piercing the gloom of the forest where Giselle is buried.

A late injury to principal dancer Matthew Lehmann made changes to casting necessary, which may have accounted for the feeling that not every idea was expressed as convincingly as it could be. Nevertheless, those ideas were persuasive. It’s made abundantly clear, for instance, that Albrecht is deeply committed to Giselle, strengthening the moment when Giselle and Albrecht’s noble fiancée Bathilde realise they are talking about the same man. Hilarion stands by – Jesse Homes in the first cast judged it perfectly – hoping against hope that Giselle will acknowledge him as her betrothed.

In the first act the men of the ensemble are given more to do, including repeated double tours (tidier at the second performance than the first) and exuberant splits in the air that fit well with a day of harvest festival celebrations and it was good to see the Peasant Pas de Deux couple as an integral part of the community. Candice Adea and Julio Blanes did the honours at the first two performances with charm and ease.

In Act II there are interesting choices for Myrtha, Queen of the Wilis, who is less physically explosive than usual but no less in command with her eloquent balances on pointe. At the second performance Glenda Gardia Gomez was a sterner figure than Polly Hilton on opening night (Hilton had earlier appeared as a gracious, amused Bathilde) but with both there was a sense that Myrtha acts more from necessity than vindictiveness. The Leading Wilis at both performances were entrancing, with Mayume Noguromi and Claire Voss outstanding.

The soft, rounded romantic style – embodied marvellously by the WAB corps – is amplified by the first entrance of the Wilis in a swirling, circular group and at the end they shrink from the morning light in chilling fashion as Giselle greets the dawn with exultation. The restoration of a fugue that’s usually cut is intriguing but slightly problematic, delaying Giselle and Albrecht’s glorious pas de deux.

In the first cast principal artist Chihiro Nomura was a sunny, delighted Giselle until her happiness was shattered. On Saturday corps member Alexa Tuzil’s peasant girl was a highly promising work in progress in the first act. Her second act was absolutely scorching: passionate, fearless and greatly moving in what was her role debut.

The respective Albrechts, Oscar Valdés and Juan Carlos Osma, are perhaps not the most natural actors but each was serviceable in Act I and wonderful in Act II. Both are Cuban and have a gorgeous combination of impeccable line and exciting power. Osma’s elevation is astonishing. (There is quite a Cuban contingent at WAB right now: soloists Valdés, Osma and Dayana Hardy Acuña; demi-soloist Blanes, who was so charming in the Peasant Pas; and corps members Glenda Garcia Gomez and Ana Gallardo Lobaina.)

In the pit the West Australian Symphony Orchestra was under the baton of Jessica Gethin, a rising conductor making her ballet debut. There were ups and downs on both nights. Gethin directed performances that had many pleasures but included a few issues with wayward horns and endings in which dancer and orchestra were not as one. At times in the second act she opted for tempos that were just the tiniest fraction too glacial.

The one true disappointment, though, was Giselle’s mother (Beth James), whose attitudes and motivations remained opaque when they weren’t confused. Not exactly disappointing but a bit puzzling was the inclusion of labradors in the hunting party, adorable though they may be. At the second performance one of them – I believe it was Treacle (there were three named on the cast sheet) – was situated well downstage and wagged his tail enthusiastically through the entire of the Peasant Pas. Well, it was good.