A recent holiday took me entirely away from all daily cares and the internet. There was no email, no Twitter, no Facebook, nothing. I heartily recommend it. Now back to Sydney theatre …

Sydney Theatre Company’s magnificent production of All My Sons, directed with piercing clarity by Kip Williams, unfolds with dreadful inexorability and finality. You understand how it is all going to end from the moment it begins. The stage is dominated by a huge, dark house. Well, it’s not a house, it’s a cutout; a façade lacking any homely details. There’s a door that has not a skerrick of welcome in it and some mean windows picked out by artificial illumination.

You couldn’t call Alice Babidge’s design subtle but it lands its punches with savage precision. This is a place that hides things and then sucks the life out of them. 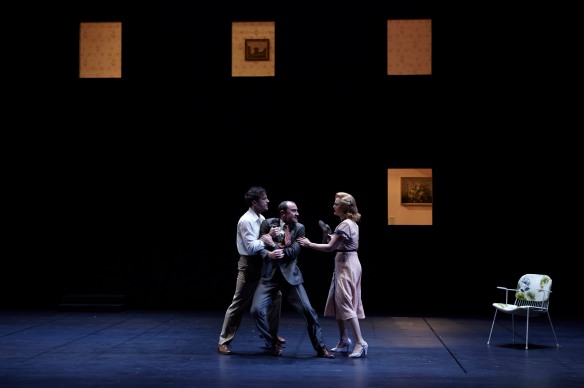 It’s not how Arthur Miller envisaged the setting. He wanted the audience to first encounter something normal and peaceful, which is what we saw in the very good Darlinghurst Theatre production that inaugurated Sydney’s Eternity Playhouse in late 2013. In Miller’s directions the fallen tree in the Keller family’s front yard would be the only visual clue to the anguish that unfolds in less than 24 hours and comes to its grim conclusion after night falls. It’s the kind of realism that reflects Miller’s debt to Ibsen’s social dramas.

But Miller was also drawing on classical Greek theatre in which personal tragedy had far-reaching implications for the whole society. Williams’s production is both of Miller’s time – the play was written in 1946 and premiered in 1947 and Babidge’s costumes reflect that – and timeless. The specific sin of Joe Keller is that he profited from selling shoddy aircraft parts that led to the deaths of young American World War II pilots and that he let another man take the blame. The broader, lasting sins are of denial of responsibility, of failure to be a decent member of his community and of a festering guilt that infects everyone. What kind of a world is made when people put their own interests before those of the group? When making money is a higher goal than being just and serving truth.

Joe and Kate Keller have – had – two sons. One, Larry, is listed as missing in action. The other, Chris, hopes to marry Larry’s fiancée Ann. If Kate accepts that, then she has to admit Larry is dead. Ann’s father is the man who took the rap for Joe and she and her brother George have shunned him ever since, believing him to be at fault. The shaky tower of lies and self-deceptions cannot survive Ann’s arrival at the Keller house to discuss her future with Chris.

Williams has gathered an exceptional cast. Every role, down to the smallest, resonates fully. Take, for instance, Bert LaBonté’s Jim Bayliss, the doctor who is neighbour to the Kellers. LaBonté puts a deceptively light underlay of irony beneath his smooth-as-silk exterior. He is a man who understands exactly what compromises he has made for a relatively easy life and what it costs to stick with them. Anita Hegh is super-luxury casting as Jim’s discontented wife Sue, as is Josh McConville as George. His whirlwind entry into the fray doesn’t come until after interval and his burning anger fuels the explosion that rips away all pretence. 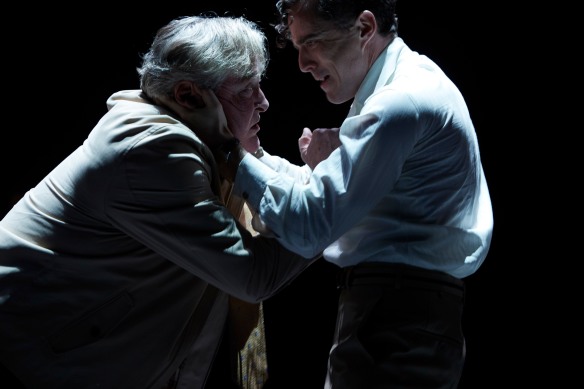 John Howard and Chris Ryan in All My Sons. Photo: Zan Wimberley

Chris Ryan (Chris) and Eryn Jean Norvill (Ann) are very fine as the young couple trying to create a future for themselves but carrying distressing emotional burdens. Chris also went to war and has inevitably been changed; Ann has heavy knowledge that must be revealed if she is to move on. Both bring memorable, affecting delicacy and lucidity to the drama.

John Howard’s Joe is a triumph of bluster and defensiveness wrapped in a body that’s succumbing to the indignities of age. Robyn Nevin’s Kate is harrowing. Her every molecule vibrates with grief and fear. She puts up a reasonable front but she knows, as we do, that the reckoning is at hand. It is almost unbearably painful to watch.

Nick Enright’s A Man with Five Children has something of the flavour of Michael Apted’s 7 Up series but adds a fascinating degree of complexity by putting the documentary maker, Gerry, at the centre. Apted’s series selected a group of seven-year-old children and returned to them at seven-year intervals. Enright moves in more closely. Gerry revisits his children every year and becomes ever more entwined in their lives. Can he be both observer and participant? Do lives change because they are observed? What do you think? A Man with Five Children started life as a student workshop in 1998, anticipating the Australian version of Big Brother by three years. The subsequent explosion of so-called reality TV has made the play appear even more prescient.

Anthony Skuse’s production for Darlinghurst Theatre Company is engrossing, despite the play’s overlong first half. Five adult actors touchingly enact their characters as young children and skittish adolescents as well as their older selves, letting us see the children – and their hopes, mistakes, anxieties and gaucheries – within the grown men and women. Because Gerry (Jeremy Waters) goes back to his subjects so frequently there is the impression of lives unfolding on fast-forward, often precariously. 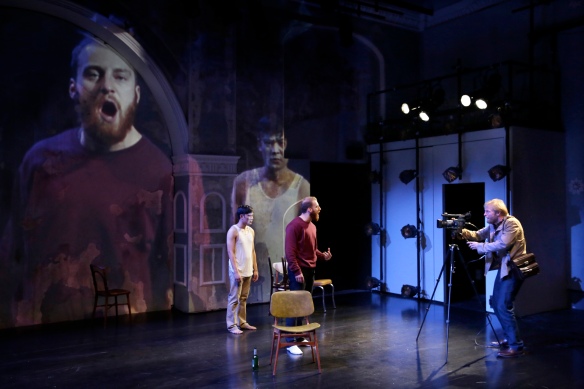 And always there is the elephant in the room: does Gerry’s camera – Gerry – play a substantial role in defining how a life will be lived?

A Man with Five Children (it premiered professionally in 2002) also offers a broader snapshot of Australian society. When we first meet them Jessie (Chenoa Deemal) is an Indigenous girl with enormous promise, cheerful Roger (Jemwel Danao) was born in Australia of Asian descent, clever Susannah (Charlotte Hazzard) is a white European migrant, Zoe (Jody Kennedy) is a defensive working-class kid and Cameron (Taylor Wiese) is troubled and neglected. Through them Enright touches on national identity, multiculturalism, idealism and celebrity culture among much else.

As the children grow some of them find partners whose lives also become part of the texture and a complicating factor. There are some joys but many sorrows, not all of which are Gerry’s fault but a lot that are. Enright nevertheless doesn’t present Gerry as a monster; he is perhaps as much a victim as anyone. The play is beautifully performed by all and exceptionally moving.

After all that sturm und drang, a good laugh. Bell Shakespeare and Griffin joined forces to present Justin Fleming’s Molière adaptation The Literati (based on Les Femmes Savantes). I confess to having found it a touch too long and the text perhaps not entirely as sparkling as some have found it, but the performances are top-notch and Sophie Fletcher’s set is a miracle. Anyone who knows The Stables theatre is aware of its space restrictions. Fletcher has managed to give the impression of a very fancy house and thrown in a revolve to boot. That in itself is hilarious, gives rise to delicious comic business and facilitates one of the show’s finest gags, in which Jamie Oxenbould negotiates a conversation between the two characters he plays, young lover Clinton and Christopher, the father of Clinton’s beloved Juliette. Comedy gold.

Lee Lewis’s tremendously good production thriftily makes do with just five actors and doubles the fun. Gareth Davies has only to impersonate the vile, oleaginous poet Tristan Tosser but along with Oxenbould the others have two roles. The incomparable Kate Mulvany is Juliette’s uptight, bookish sister Amanda – her tussle with a chair is a particular highlight – and a minor functionary; divine Caroline Brazier is Juliette’s hideous mother Philomena and wise scholar Vadius; and Miranda Tapsell is as radiant as ever – she really does have the most eloquent face to be seen anywhere on the Sydney stage these days – as Juliette and seen-it-all housemaid Martina.

The piece is a send-up of literary pretension with a side serve of thwarted romance and can be greatly enjoyed if you don’t think about it too much. Aspects of it aren’t as sharply relevant to modern eyes and ears as Fleming’s earlier, fabulous Tartuffe was, but it does send the audience wafting out on a cloud of ineffable silliness. And that’s not a bad thing at all. No, not to be sneezed at these days.

A Man with Five Children, Eternity Playhouse, until June 26

All My Sons, Roslyn Packer Theatre, until July 9

The Literati, The Stables, until July 16