MANON, which premiered 40 years ago next month (March 7, 1974), is in an exclusive club, the handful of full-length 20th century ballets that have insinuated themselves firmly into the repertoire. The Australian Ballet doesn’t exactly have it on high rotation but, including this year, Manon has shown up five times in the 20 years since the AB first presented it, including a short Melbourne Festival season guest-starring Sylvie Guillem, for whom the title role was a signature one. Indeed, so well does Manon suit Guillem that despite her almost exclusive concentration on contemporary dance these days she appeared in the role as recently as 2011, with La Scala when she was 46. 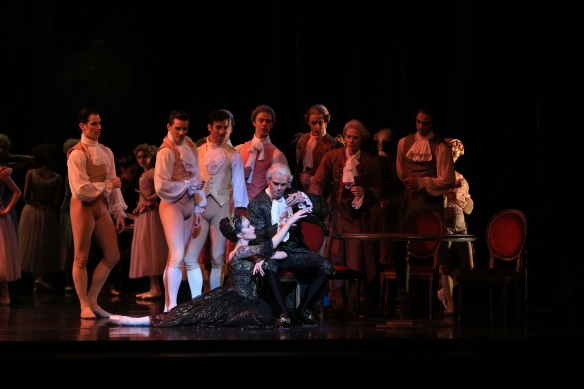 Lucinda Dunn and Steven Heathcote in The Australian Ballet’s Manon

At the AB notable Manons have included Vicki Attard, Justine Summers, Kirsty Martin, Amber Scott, Rachel Rawlins and others – I have seen perhaps a dozen Manons and they all were quite different, as they need to be. One doesn’t go to Manon after Manon to remind oneself of the steps, just as repeated viewings of opera or hearings of a symphony are not undertaken so the experience can be repeated exactly. The role of Manon is greatly coveted because of the flexibility it offers, and for the unparalleled stream of shiveringly sexy pas de deux Kenneth MacMillan lavished on his heroine and her lover, the student des Grieux. Manon’s is a story of choices made and consequences suffered, with a flesh-and-blood immediacy that sets her quite apart from the supernatural and fairytale heroines who dominate the classical stage.

The AB’s 2014 season opened in Brisbane on Friday with Manon, featuring Lucinda Dunn in what was – and this is scarcely believable – her debut in the role. Dunn has been with the AB for 23 years and in the top rank since 2002 but was on maternity leave in 2008 when the production last surfaced. In 2001, the Melbourne Festival year, it was Guillem’s show. In 1999 Dunn was a senior artist and various principals had claims on the part. The wait was worth it. Dunn’s artistry deepens with each passing year and she must have a doppelganger in the attic absorbing the physical wear and tear that bedevils ballet dancers.

As the ballet opens Manon is on her way to join a convent, not because she has a vocation but because she is poor. She is diverted from this grim fate by chance, swept away by the handsome poet who is, alas, also impoverished. An opportunity to move up the greasy pole of prosperity is taken as money and slightly shop-worn glamour trump penniless young love. It will not end well. Now well versed in the ways of seduction and offered material rewards for it, Manon rides high in demi-mondaine society, falls low and pays with her life, as women must in 18th century operatic stories such as this. Easier to order the moon to relinquish control of the tides than to have the woman prosper, even though she is taking the only path open to her. Well, other than the convent.

In her first performance Dunn was wonderfully alert and active, the driver of her own destiny in co-operation with her brother, Lescaut. This is another role that can be played in a variety of ways – Lescaut can be brutal and controlling, or an amoral cad, or a louche charmer who is cannily opportunistic when he’s not drinking too much, which is the way it felt on Friday. The rakish dash of Lescaut’s choreography suited the first-cast Lescaut, Andrew Killian, extremely well and he and Dunn seemed like siblings, making sense of actions that can seem unmotivated in MacMillan’s headlong dash through the story’s reversals. Their trio with predatory Monsieur GM – scarily attractive Steven Heathcote, himself a former des Grieux of great note – was superb. 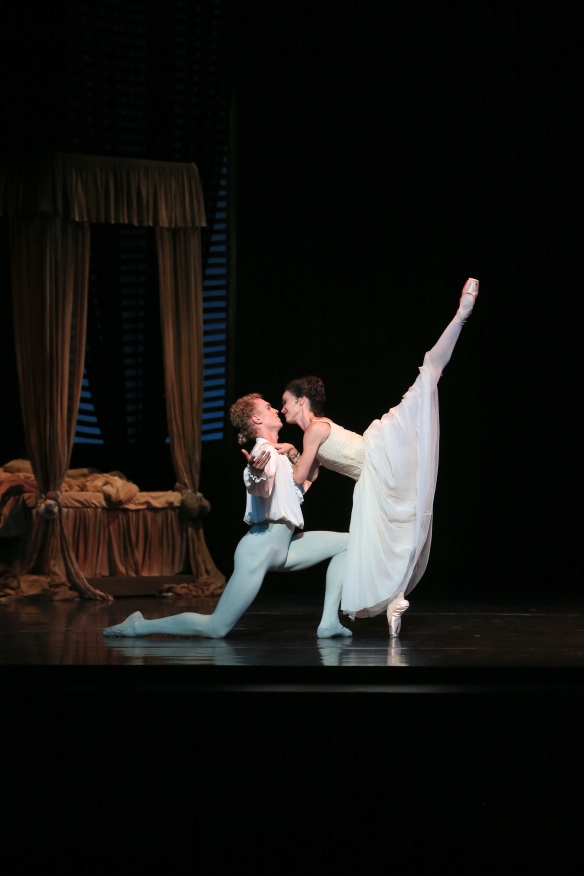 It was always worth focusing on the key players even when there was abundant colour and movement to distract attention. While the ensemble work is undeniably lively it is mostly inferior flim-flam. In what is supposed to be an upmarket brothel, for instance, the cavortings of MacMillan’s cutsey-pie scrubbers, decked out in appalling wigs, could not be less sexually alluring. In the opening scene there are cart-wheeling lads with grubby faces who are exceptionally cheerful, as such characters usually are in balletland, and entirely unbelievable. And they all conveniently go to sleep at the very same time so Manon and des Grieux can have their first gorgeous pas de deux.

It was much better to watch Lana Jones, dancing with wit and diamond brilliance as Lescaut’s mistress, and the des Grieux of Adam Bull, who started cautiously but got better and better – it will be good to see him after he has a few performances under his belt. That first long, slow solo, in which des Grieux yearningly offers himself to Manon is a tricky one and one could see Bull negotiating the steps rather than the character. His partnering in the first bedroom pas de deux had a couple of clunky moments, and then he seemed to click into gear and submit to the passionate drive of the piece.

The silken way in which Dunn approached the choreography excluded any element of coquettishness, a quality that is brittle and artificial. It is perfectly reasonable to treat Manon as a version of Thackeray’s Becky Sharp, the knowing little madam whose first action on leaving school is to toss the farewell gift of a bible straight out the window of her carriage. But that kind of hard-edged calculation is not what Dunn showed. The luscious back bends and delicious ripples in the shoulder spoke of deep pleasure in Manon’s sexual awakening and the goodies it delivered. She didn’t have to work hard at attracting men; she just did.

The production, designed by Peter Farmer, looks suitably sumptuous on the stage of Queensland Performing Arts Centre’s Lyric Theatre, although I felt at one or two moments the lighting was brighter, and less evocative, than remembered, particularly in the final scene in the Louisiana swamps where Manon meets her end. Still, much of the staging looks like a luscious 18th-century painting come to life.

Along with Dunn’s debut, Friday’s performance brought the first opportunity to hear the newish (dating from 2011) arrangement and orchestration of the score by Martin Yates. Bits and pieces of Massenet, but not anything from his opera on this subject, were sourced and arranged for MacMillan by Leighton Lewis with input from Hilda Gaunt. It worked reasonably well, but after its overhaul the material now sounds more coherent and has a better sense of dramatic build.

The opening pages of the score have an attractive gauzy quality and the sense of transparency continues as a way of underscoring the fragility of the Manon-des Grieux romance before it builds into an outpouring of sexual urgency. The key melodies are lovely and work well as returning motifs that help the drama cohere, and overall Yates seems to have toned down aspects that could fall into the overly sentimental or vulgar category. I hope to get a few more hearings under the belt when Manon comes to Sydney, although undoubtedly one heard the music to greater advantage in the Lyric Theatre. Certainly it was very handsome on Friday in the hands of the Queensland Symphony Orchestra, conducted by the AB’s music director Nicolette Fraillon.

In the end, though, it was Dunn’s night as a woman who delighted in her power and thrilled to the sex, the gifts and the attention but most of all, I think, had that most human of desires: to belong.

The AB opened the year in Brisbane for scheduling rather than strategic reasons, but ballet is becoming a hot commodity here. With Queensland Ballet’s star-studded MacMillan Romeo and Juliet coming up and the American Ballet Theatre visit hot on its heels, you’d have to say Brisbane is now ballet central.

A version of this review appeared in The Australian on February 24.