What a great night of dance – all of it brand spanking new, performed by some of the best movers on the planet and offered to the public at $35 a ticket. Even when the quality is uneven New Breed, now in its fourth iteration, offers a lot of bang for your buck. This year’s quartet of works is exhilarating.

Sydney Dance Company’s artistic director Rafael Bonachela curates New Breed cannily. He gives choreographic opportunities to some of his own dancers and includes interesting independent Australian choreographers who can benefit from the resources and exposure SDC offers. 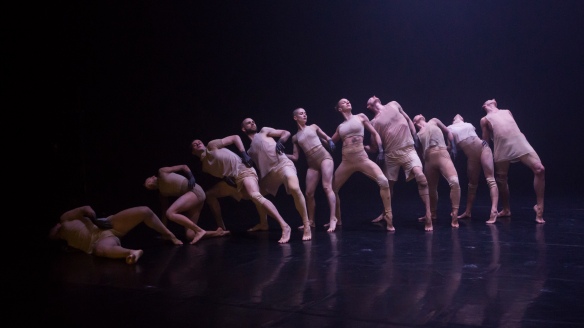 Take Melanie Lane. Her WOOF – the night’s highlight – uses 12 dancers (it was to be 13 but one was injured several weeks ago). She is a highly experienced choreographer who works internationally but rarely with a group of that size.

I have no idea what her title means but never mind. The piece itself is quite clear. The work begins in silence and with an evocation of the past. The company composes itself into tableaus that mimic the formality of Renaissance paintings on classical subjects but not their extravagance. The dancers are dressed simply in flesh tones, leaching the picture of all colour except for one intriguing touch. Their hands are sooty.

The dancers lean against one another or recline gracefully for a few moments and then reform. The entrance of music (the original score is by Clark) encourages a fracturing of the whole into sub-sets, whose dance-floor moves bring them into today’s world. Towards the end of the piece, which runs only 20 tightly packed minutes, an alien, futuristic quality emerges, mashed up with the irresistible image of a messed-up corps de ballet at work.

As Lane’s concern is with the way societies organise themselves there’s little in the way of emotional intimacy. There is, nevertheless, a welcome touch of human messiness as those sooty hands lay themselves on initially pristine costumes and her final image is one of transcendence. 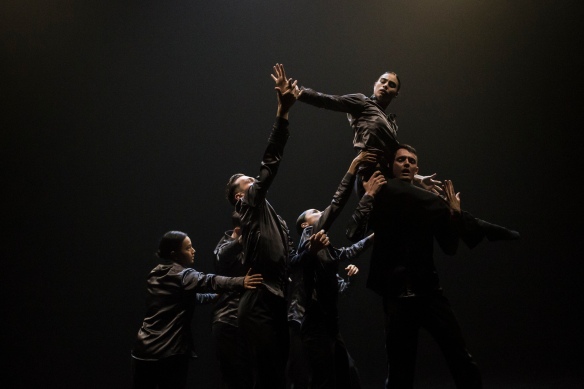 SDC dancer Petros Treklis’s The Art of Letting Go comes a close second to WOOF for beauty of composition and he adds a jolt to the heart. Seven dancers are seen as aspects of one mind as Treklis repeats touching motifs of falling, rising, spinning and reaching to the music of Rachmaninov. The movement is often very fast but always splendidly structured and never less than lyrical and deeply felt. A huge success.

Cass Mortimer Eipper and Nelson Earl, also SDC members, collaborated on the fierce duo Bell Jar (which they perform) that has the theme of dancing with one’s demons. To thundery music by Marc Cher-Gibard they fight, grapple and butt heads, both looking sensational.

Tyrone Earl Lraé Robinson’s [bio]Curious is a surreal, sensual and witty ode to the environment, here seen as a viable sexual partner. This is nature seen in several ways and quite a different light. The piece is the program’s wild card and a beguiling one. You want intimacy? Here it is in full bloom. 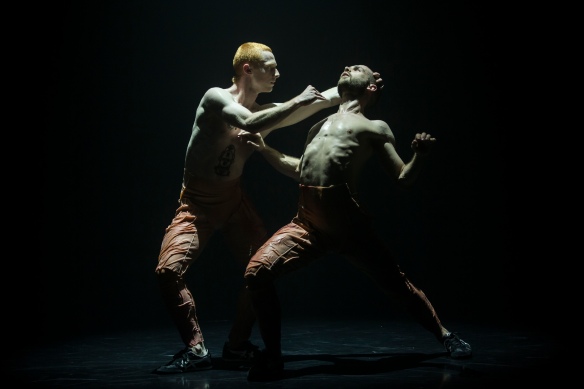 It is a little invidious to single out some dancers because everyone looked wonderful on opening, but the hyper-elastic, hyper-kinetic Nelson Earl was, in very different ways, like a man possessed in Bell Jar and [bio]Curious. He holds nothing back. Holly Doyle lit up WOOF, Todd Sutherland was outstanding in The Art of Letting Go, Davide di Giovanni was a commanding presence in [bio]Curious and Chloe Leong was delicious as the embodiment of nature in Robinson’s work, super-seductive and holding the attention even when reclining in sultry fashion among the foliage in a hot house at the back of the stage.

The other choreographers contented themselves with lighting to support their work. Verity Hampton expertly did the honours for all.

A version of this review appeared in The Australian on December 4.