Tucked away in Sydney’s Kirribilli, in a secluded – and highly enviable – spot right on Sydney Harbour, the Ensemble quietly goes about the business it’s been devoted to for nearly six decades. You won’t often read about it in the mainstream press and while many fine actors can be seen there, they are only occasionally boldface names such as those so frequently encountered at Sydney Theatre Company or Belvoir. Never mind. The Ensemble has its own character. In its small auditorium, steeply raked and arranged in a semi-circle around a small acting area, it’s common to see front-row patrons having to pull their feet in swiftly to prevent actors from tripping. The space is intimate and welcoming and the atmosphere comfortable.

The Ensemble describes itself as the “longest continuously running professional theatre in Australia”, having staged its first performances in 1958 with founding director Hayes Gordon, who ran the company for 27 years. The Ensemble is surely also the country’s most stable outfit. Sandra Bates succeeded Gordon and was at the helm for 30 years, retiring fully in January this year after sharing the artistic directorship with Mark Kilmurry for five years. Kilmurry is now solely in charge of the Ensemble’s direction as the company heads towards its 60th anniversary in 2018. (By comparison, Sydney Theatre Company is a whipper-snapper that will turn 40 in 2018.) 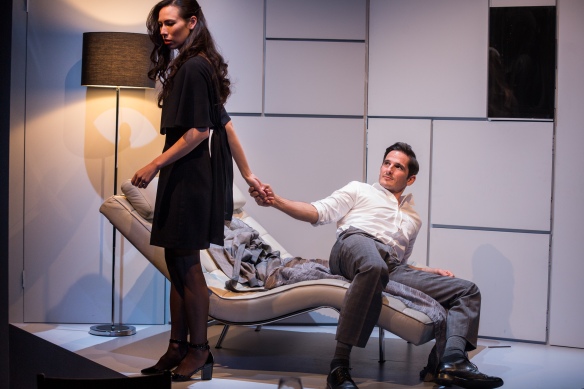 Remarkably, the Ensemble has survived without the benefit of any ongoing government funding. The Balnaves Foundation is its major partner and there is a small group of businesses and foundations which are supporting and strategic partners. Individuals donate a small percentage of Ensemble income. But essentially the Ensemble has to put on plays people want to see (and at times that suit them – the Ensemble has exceptionally welcome 11am weekday matinees sprinkled through its seasons). The tagline underneath the theatre’s name on its programs is this: theatre for everyone.

You would not be wrong to think that suggests a reliance on conventional dramas and light comedies, and certainly seasons have had their share of new David Williamsons and old Neil Simons (coming up next month: Barefoot in the Park), but there are also works that have greater resonance. Jane Carafella’s e-baby, a two-hander that deals with surrogacy, will be directed by Nadia Tass, stars Angie Milliken and opens in October. In recent years the Ensemble has brought to Sydney audiences the wonderful Annie Baker’s Circle Mirror Transformation (2012), David Auburn’s Proof and Bruce Norris’s Clybourne Park (both 2014), David Lindsay-Abaire’s Good People (April/May this year), Nina Raine’s Tribes (June this year) and Harold Pinter’s Betrayal (playing now).

Betrayal starts at the end and works its way, backwards, to the beginning of an affair between Emma and Jerry. Emma is married to Robert; Jerry is Robert’s best friend. In the first scene, some years after the end of the affair, Emma meets Jerry for a drink to tell him her marriage is over and, inter alia, that she had to reveal the affair to Robert during an all-night argument. As we will discover, this is not exactly true. The Emma-Jerry affair is not the only act of betrayal in this enigmatic three-hander.

Mark Kilmurry’s production is perhaps best described as workmanlike. Pinter’s language in this play is characteristically unadorned; the complexities gather beneath the surface, or should. The intricacies of passion, friendship and gamesmanship are not fully mined here, although the surface is played entertainingly by Ursula Mills as Emma with Guy Edmonds as her husband and Matthew Zeremes as her lover. The real action, however, is in what Emma, Robert and Jerry – particularly Robert – think and know rather than say.

It was a little instructive in this respect to note that Betrayal is described on the Ensemble website as running for approximately 90 minutes without interval. At the performance I saw we were done and dusted within 75 minutes. Those famous Pinter pauses didn’t get a huge look-in.

In repertory with Betrayal is James Graham’s A History of Falling Things. It’s a slight, sweet rom-com with a twist: the two young people whose burgeoning romance we follow suffer from keraunothnetophobia, a particularly precise fear, that of falling man-made satellites. Naturally this makes it hard for them to leave the safety of their homes and the relationship is conducted chiefly via electronic means. But is that enough?

The Ensemble’s production is blessed with Sophie Hensser’s luminous performance as Jacqui and Eric Beecroft’s as the highly strung but likeable Robin (Nicole Buffoni is the sensitive director). Merridy Eastman, Brian Meeghan and Sam O’Sullivan give fine support. It’s a modest piece, to be sure, but heart-warming too as it gives a shot of normalcy to two characters who seem destined to live on the margins. There is a gentle message there.

Anna Gardiner designed the set for both History and Betrayal. In fact, given the interlocking schedules the set is essentially the same for both, with different moveable elements, and not entirely satisfactory for both. It’s a pity.

Still, I was glad to see both plays, and continue to be glad that the Ensemble exists. It has heart. Yes, in lieu of government subsidy it has to balance the books with a new Williamson or an Alan Ayckbourn (and absolutely nothing wrong with that – I’ll be there for Relatively Speaking in November). But often enough it gently challenges its loyal audience, and one suspects Kilmurry may have more up his sleeve in years to come. He launches his second season on August 8.

A History of Falling Things and Betrayal both end on August 20.