HE has no name other than Man in Chair, this cardigan-wearing musicals tragic, for he is Everyman, screaming inside at the bombast of the modern sung-through show – and yes, he means you, Andrew Lloyd Webber – while maintaining an exterior of mild exasperation. Well, he is every man or every woman who just wants to take away from the theatre a tune they can hum, having enjoyed some pretty costumes, an amusingly tangled plot, a happy ending and definitely no audience participation. The show will preferably be short.

There’s a phrase people often use about the theatre, and particularly about the musical theatre. It takes you out of yourself, they say, meaning that for a few hours you forget your cares and get caught up in a world more carefree, more glamorous, more vibrant, more everything than the one you’re going home to. That’s what Man in Chair wants, and here the idea is given literal form.

As the lights go down Man in Chair starts confiding to the audience his decidedly unfavourable views on the current theatre. What does he consider a good show? That would be The Drowsy Chaperone, a 1920s piece of fairy floss that, he acknowledges, is perhaps not perfect but does exactly what he needs it to do. Allow him to illustrate.

Within moments of the needle hitting his treasured vinyl cast record of The Drowsy Chaperone, its characters burst into Man in Chair’s room. As he eagerly watches the action unfold he gives an aficionado’s gloss on the plot, the lyrics, the actors playing the roles and, in little snippets, his own life. No longer is Man in Chair in his dreary apartment. He is intensely engaged with the show. 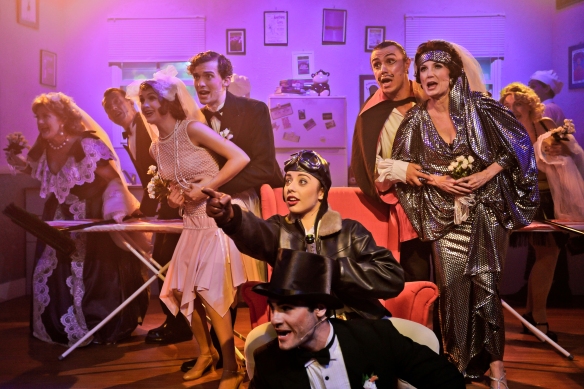 The Drowsy Chaperone takes place on the wedding day of Janet Van de Graff, a 1920s theatre star leaving the stage to be married, much to the chagrin of her producer. Can Janet be persuaded to change her mind? Helping things along are heavies disguised as pastry chefs, a lavishly accented Latin lothario, an aviatrix, a vaudeville act, a big tap number and a resolution that just falls from the sky. Adding some spice are the shenanigans of Janet’s dipsomaniac and therefore chronically sleepy chaperone.

It is as silly and formulaic as it sounds, which is where The Drowsy Chaperone shamelessly has it both ways. Creators Bob Martin and Don McKellar (book) and Lisa Lambert and Greg Morrison (music and lyrics) pay genuine homage to good old-fashioned entertainment while sending it up mercilessly. Man in Chair yearns for the wit and glamour of Cole Porter but there is only the flimsiest facsimile of it in The Drowsy Chaperone. There’s a reason they don’t make ’em like that any more, but also why there’s nostalgia for earlier, more graceful times.

Squabbalogic’s production captures the dichotomy immaculately, and – as Sweet Charity did before it – makes triumphant use of the tiny Hayes Theatre Co space. On Broadway the show opened out to become the extravaganza Man in Chair sees in his mind’s eye as he listens to the music, and the glittering production values meant Man in Chair’s favourite musical actually came up rather well. At the Hayes there is no escaping the fact that we are in Man in Chair’s generic city apartment. The musical’s flaws – which Man in Chair admits exist – loom larger.

Interestingly, this turns out not to be any kind of problem, due mainly to a pivotal piece of casting. Director Jay James-Moody has assembled a very fine team but his most successful choice was the assignment of himself to the part of Man in Chair. It was a great call; James-Moody is tremendous. He is very young for the role but that also fails to be a problem. James-Moody is too fresh to be the quintessential bitter and bitchy show queen. Instead there is unexpected poignancy in seeing the importance Man in Chair places on this extremely minor piece. The casting probably wouldn’t work in a huge theatre, but then that’s exactly where we are not.

There are little windows in Man in Chair’s apartment (splendid design by Lauren Peters) that give glimpses of the world he has shut out. With his eager face, intelligent high forehead, wry self-awareness and irony-tinged delivery, James-Moody really makes you hope Man in Chair isn’t setting himself up for the fate of an actor whose demise he describes. It involves a solitary death and a poodle.

In every department – direction, performance, design, choreography, music (a terrific six-piece band) – there is complete understanding of the show’s style and wit. It seems a little unfair to single individuals out from the terrific ensemble, but here goes. Extra bouquets to Monique Salle, who is not only a zesty Trix the Aviatrix but choreographed imaginatively within very tight limits; Hilary Cole, whose charmingly self-regarding Janet could not be further removed from her tormented Carrie of last year (also for Squabbalogic); Michele Lansdown’s seedily glamorous Chaperone; and Tom Sharah’s lustily sung Adolpho, whose intelligence is located well south of his head.

The Drowsy Chaperone ends on April 6.