Who knew gloom could come in so many shades? This year’s New Breed program must have tested the ingenuity of Benjamin Cisterne, Sydney Dance Company’s go-to man for lighting design, but he came up trumps, magnificently meeting the challenge of finding four different ways of illuminating darkness. 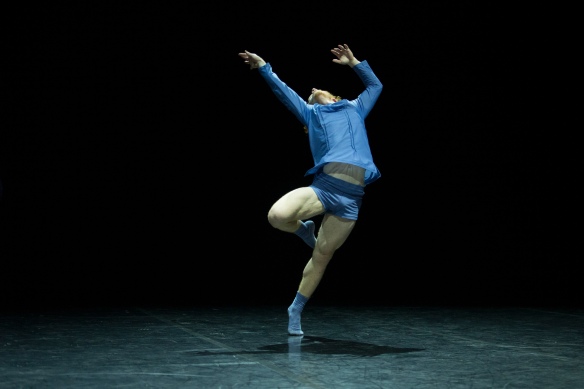 What You See, choreographed by Jesse Scales. Photo: Pedro Greig

The program is curated – by SDC artistic director Rafael Bonachela – to present emerging choreographers or those who should be seen more widely. This year they are SDC dancers Jesse Scales and Richard Cilli and independent artists Rachel Arianne Ogle (from Perth) and Shian Law (from Melbourne), all of whom have made sombre works that don’t exactly add up to a night of contrasts.

Ogle’s Of Dust is made to a commissioned score by Ned Beckley that evokes cosmic storms in endless space. Order and disorder are expressed in counter-balance, movements in canon or succession, complex swirling circles and lines that sweep, falter, fragment and coalesce. It is mesmerising and lovely to watch but rather long for its one idea: that we are made of stardust and to dust we will return.

Law’s Epic Theatre starts in the foyer with two men grappling. Inside the auditorium we are initially kept from our seats by a long line of people with linked arms, although some of the more bolshie break through to sit down.

Law is interested in blurring the lines between audience and performer and, once we are seated, transfers that idea to the stage by mixing non-dancers and dancers. People fight, they recline like statues, they lift others as if they were mannequins and they walk. They walk a lot, to Marco Cher-Gibard’s trance-inducing new score (Cher-Gibard performed lived) and in Cisterne’s gauzy, hazy light.

There is, Law says at the end, “one irreducible fact” about theatre: one group of people is looking at another. This is true, but as with Ogle’s piece it would be good to have more than meets the eye. Both are sophisticated dance-makers who failed, at least with this viewer, to make an intellectual or emotional connection of any substance. Great-looking pieces though.

Cilli’s Hinterland stitches together elements that unfortunately don’t add up to a coherent whole. The overlong beginning looks like something that should have stayed in the rehearsal room as dancers vocalise to the movements of others. Later, some chitchat about icebergs and the film Titanic is simplistic and too poorly projected to offer insights into Cilli’s idea of “the tension between outward appearance and the vast inner landscape”. The slow motion entwining of nine bodies into an undifferentiated mass at one point is, however, enticing.

Scales’s What You See is danced to Max Richter music, well chosen. The modestly scaled piece for two men and a woman, each in their own world of emotional anguish, is on a well-worn theme but Scales has an appealing delicacy of touch and feeling that suggests she could and should expand her horizons.

It goes without saying that the SDC dancers are tremendous, one and all, in each of the works.

The choreographers chosen for New Breed get top-of-the-line support. They make their work on a bunch of the finest dance bodies in the country, are seen at one of the country’s most prestigious performing arts addresses and are given a generous season of nine performances. That last point is important. There seems to be a good appetite for new work presented in the right place at the right price – the top Carriageworks ticket price is just $35. It’s also excellent to note that The Balnaves Foundation, a supporter of New Breed for the past three years, is coming back for a further three.