Graeme Murphy fell ill earlier this year and was unable to complete his new ballet, The Happy Prince, in time for its premiere in Melbourne, which was to have been in March. It was then to be performed in Sydney (it is now likely to be seen in 2020). Alexei Ratmansky’s Cinderella (2013) and Maina Gielgud’s Giselle (1986) were rushed into the Melbourne and Sydney schedules respectively – safe choices and understandable ones, given both ballets were staged recently.

Ako Kondo’s gentle, thistledown Giselle captivated from the moment she appeared. She seemed scarcely to touch the ground, levitated by her love for Albrecht. When she went mad she seemed even less substantial, sinking to her knees as if weightless. Kondo’s interpretation was delicately drawn and full of fine, illuminating detail – the shy, brief touching of hands with Albrecht, her quiet awe in the presence of Bathilde, the heartbreaking way in which she told Hilarion she didn’t love him, forced into a declaration her sweet soul shrank from making. Principal artist Andrew Killian is a highly experienced Hilarion who on this occasion appeared much more vulnerable than usual, a portrayal that meshed beautifully with Kondo’s approach.

She undoubtedly benefited from Leanne Benjamin’s insights. The former Royal Ballet principal artist was guest coach for this season.

As always, Olga Tamara was superb as Giselle’s mother. She is marvellous in the mime, which is the audience’s bridge from the first act to the second. It was also good to see the Peasant pas de deux pleasingly integrated into the action. It can often seem rather dull, overlong and extraneous but one felt that Jill Ogai and Marcus Morelli – Ogai in particular – were part of this community. With her natural, earthy quality Ogai would be an interesting Giselle.

Chengwu Guo’s Albrecht was danced gleamingly although his acting was less layered in the first act than Kondo’s. The moment when Albrecht recognises the necklace his betrothed, Bathilde, has given Giselle went for little and appeared to be completely forgotten the next second while the upstairs-downstairs relationship with his attendant, Wilfred (Timothy Coleman, excellent), was sketchily rendered. Guo was more convincing in the second act as he tenderly supported Kondo, who was entirely of the air and at one with the melting Romantic style that gives Giselle its enduring appeal.

The women of the company were entrancing as the wilis in Act II and perhaps would have been more dramatically forceful had Nicola Curry as their queen, Myrtha, registered more forcefully herself.

During this season of Giselle The Australian Ballet is also performing in New York at the Joyce Theater’s Australia Festival, presenting a mixed bill from May 9-12 featuring three of TAB’s four resident choreographers. Stephen Baynes’s Unspoken Dialogues and Alice Topp’s Aurum will be joined by a new work from Tim Harbour. With part of the company out of town a handful of more junior dancers will be seen as Hilarion, Myrtha and in the Peasant pas at some performances. It’s worth scanning the casting to see who and when.

AS I foreshadowed on December 15 on my Diary page, Queensland Ballet has lost one of its principal artists, Natasha Kusch, to The Australian Ballet. Kusch was with QB for less than 18 months after leaving the Vienna State Opera Ballet. She joins the AB as a senior artist. In a press statement released today the AB says Kusch will make her debut as Giselle when Maina Gielgud’s production opens in Melbourne in March.

Kusch is pictured here as Juliet with Australian superstar Steven McRae, who was a guest artist from the Royal Ballet when QB staged Kenneth MacMillan’s Romeo and Juliet last year. 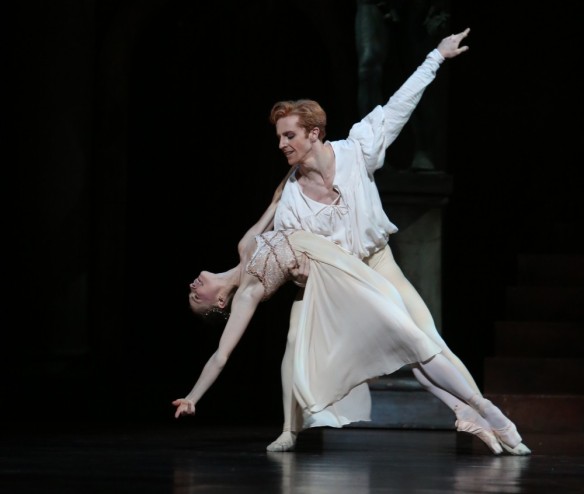 Natasha Kusch and Steven McRae in Romeo and Juliet

There is significant movement at several of the country’s leading dance companies, but none more striking than at QB. It’s possible to interpret Kusch’s move as something that could create tension between QB’s artistic director Li Cunxin and the AB’s David McAllister (the two, of course, danced together at the AB) but it also points to how greatly Li has increased QB’s strength and visibility.

And Li was able to bury news of Kusch’s departure in an early-December press release. The big announcement he had to trumpet was the hiring of two dancers from the National Ballet of Cuba – premier Yanela Piñera and principal Camilo Ramos (the top two ranks at NBC).

As I wrote on my Diary page at the time, the pair, partners in life, join at the end of this month. Piñera joined NBC in 2005 and was promoted to premier dancer in 2011. She would have gained some knowledge of Brisbane when NBC visited in 2010. Unfortunately she wasn’t in the opening night cast of Don Quixote so I haven’t seen her dance live but there are, naturally, many clips on YouTube. It will be fascinating to see how the Cubans fit into the QB repertoire for next year – La Sylphide, Coppelia, Trey McIntyre’s Peter Pan and The Sleeping Beauty.

The QB press release said Piñera’s position would exist under Queensland Ballet’s International Guest Artist program, funded by the Jani Haenke Charitable Trust, but Li told me that Piñera will be a full-time principal – her position is not apparently like that of Huang Junshuang, who for two years was QB’s very welcome guest principal but not permanently with the company.

Further down the press release was news of comparable interest, the retirement of incredibly valuable principal Matthew Lawrence and long-serving soloist Nathan Scicluna. However, with the arrival of Piñera to join principals Hao Bin, Clare Morehen and Meng Ningning and with Ramos joining soloists Lisa Edwards and Shane Wuerthner (an American who joined QB last year), the senior ranks are close to full strength.

West Australian Ballet is seeking a new senior man after the announcement that soloist Daniel Roberts has joined Sydney Dance Company, where there have been extensive changes in the 16-member troupe. Chloe Leong, Josephine Weise and Sam Young-Wright have also joined and former member Richard Cilli has returned. Leaving are Chen Wen, Tom Bradley and Jessica Thompson, while Chris Aubrey is taken a year’s sabbatical. Company member Petros Treklis joined only last year.

Bangarra Dance Theatre also announced the return of two former dancers who left last year but are now back in the fold – and it’s very good news. Deborah Brown and Daniel Riley, both of whom also choreograph, are back with the company.

West Australian Ballet opens its 2015 season with Zip Zap Zoom: Ballet at the Quarry, Perth, from February 6; The Australian Ballet’s 2015 season starts in Sydney with Graeme Murphy’s Swan Lake from February 20 and Giselle opens in Melbourne on March 13; Sydney Dance Company opens Frame of Mind in Sydney on March 6; Queensland Ballet’s La Sylphide opens in Brisbane on March 20; Bangarra’s Lore opens in Sydney on June 11 and before then the company works on a film of Spear, based onStephen Page’s wonderful 2000 work of that name, which will premiere at the Adelaide Film Festival in October.