A CLASH of ballet opening nights saw Queensland Ballet’s A Midsummer Night’s Dream and The Australian Ballet’s Swan Lake go head to head – well, from my perspective. They were in different cities at the time. For reasons both artistic and logistical, I went to the first performance of Dream in Brisbane on April 1 and the second Swan Lake performance at the April 2 matinee. I reviewed both for The Australian and both will be up separately on the blog in the next few days.

The artistic reason for putting Dream first? It was the premiere in Australia of a Liam Scarlett work – a notable event in the ballet business – whereas Swan Lake, a traditional version choreographed by Stephen Baynes, is a revival. (I’ll have more to say about Swan Lake later after I get a few more performances under my belt.) 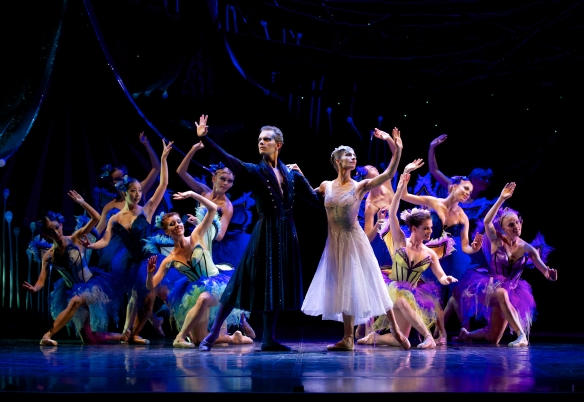 The Scarlett is a co-production between QB and Royal New Zealand Ballet, which premiered the work last year. I saw it in Auckland and loved its sensuousness. (Tracy Grant Lord’s designs are a wonderful part of the equation.) Scarlett came through the Royal Ballet School and danced with the Royal Ballet until his choreographic career really started taking off (he was identified and encouraged while still at the school). The post of artist in residence was created at the Royal for him although it doesn’t tie him exclusively to the company. (If you’re interested I wrote about him at length here.)

He’s acutely aware of his dance heritage, and that of course includes a thorough knowledge of Frederick Ashton, founder choreographer of the Royal. I’ve seen earlier Scarlett works – the narrative Sweet Violets with the RB in London and the abstract Acheron performed by New York City Ballet – and wasn’t entirely bowled over by either. With Dream, however, you can see the Ashtonian influence and also that Scarlett isn’t merely copying but has his own voice. The intricate, detailed upper-body work and sharp, fast footwork is incredibly complicated yet looks unrushed, harmonious and gorgeously musical. In Dream Scarlett keeps most of the dancing quite close to the ground, which allows the dancers the trick of appearing feather-light but also more natural and characterful.

QB is a company of about the same size as RNZB and has plenty of zesty dancers, some of whom are quite new. QB artistic director Li Cunxin has hired three dancers from National Ballet of Cuba – principals Yanela Piñera and Victor Estévez and soloist Camilo Ramos – and principal Laura Hidalgo, an Argentinian-born dancer who was lately with National Ballet of Flanders. All danced at the Dream opening performance. (At only 22 Estévez is young to be a principal artist but he has handsome stage presence.)

Interestingly, after the performance I was asked not once or twice but three times who I thought had danced Dream better: QB or RNZB. It’s a tough one. Both companies clearly relished the style, humour and emotion and transmitted it joyously. But QB had only a few days with Scarlett, who made it on the RNZB dancers over some weeks. And, I will note, I saw the RNZB performance a few shows in, after the short Wellington season had been completed. The connection was deep. An example is Tonia Looker’s rapturous Titania in the big Act II pas de deux – I can still see the luscious abandon of her curved back. Hidalgo is a poetic dancer who I am keen to see in more key roles but she wasn’t quite as inside the role as Looker.

I’m talking cigarette papers here, as in minute differences, but that’s how it goes in ballet. I wonder too if there’s something about the feel of a ranked company (QB) versus an unranked (RNZB). We’re talking something quite elusive here and possibly there’s not a lot in it. But the idea did pop into my head. I might come back to this later. 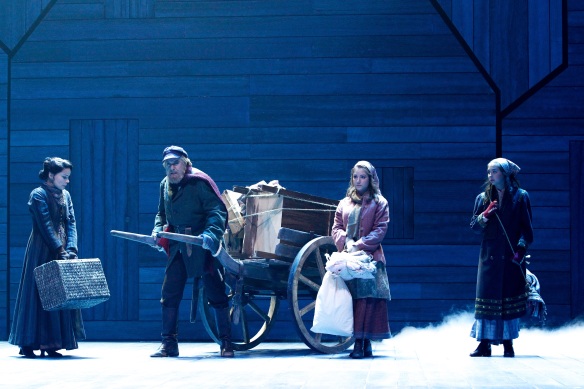 Tevye (Anthony Warlow) and daughters in Fiddler on the Roof. Photo: Jeff Busby

Earlier in the week (March 29) Fiddler on the Roof arrived in Sydney after its Melbourne opening season. Director Roger Hodgman plays a very straight bat with it but it’s a production that works where it matters. Which starts, not surprisingly, with Tevye, the impoverished milkman living in early 20th century Russia with three daughters who are starting to think for themselves. Anthony Warlow inhabits this funny, dogmatic, sometimes infuriating man with salt-of-the-earth ease. Whether Tevye is having one of his many man-to-man chats with God or roaring at his daughters, there’s a great, enveloping feeling of warmth. This is a Tevye you can admire even when you don’t agree with him and love for his steadfast commitment to beliefs and family. Warlow’s burnished baritone is still a glorious instrument (now in his mid-50s, Warlow is in the sweet spot for the role in terms of age) and it adds incomparable lustre to songs we know so well but rarely experience sung with such glow. To hear If I Were a Rich Man as if new is a true gift. And is there a musical that begins with a more thrilling, information-rich number than Tradition? (Well, some friends immediately cited The Lion King’s admittedly roof-raising opening, but I think they’re talking about staging.)

Warlow has a mostly strong cast around him: Tegan Wouters, Monica Swayne and Jessica Vickers as the loving, clever daughers; Mark Mitchell as rejected suitor Lazar Wolf; and Blake Bowden as the passionate student Perchik are all spot-on. Pop singer Lior, making his music-theatre debut as Motel, had a rocky start to Miracle of Miracles on opening night but rallied nicely to give a nuanced performance. Much has been said about Sigrid Thornton’s too-fragile voice for Tevye’s wife, Golde, and there is indeed a huge mismatch between her and Warlow; and Nicki Wendt’s turn as matchmaker Yente felt too hungry for laughs.

Dana Jolly’s reproduction of Jerome Robbins’s choreography is most welcome and musical director Kellie Dickerson is in charge of a small but very effective orchestra. I found Richard Roberts’s design somewhat uninspiring but the musical’s themes are undimmed and they resonate strongly under Hodgman’s expert direction. When, in 1964, Joseph Stein (book), Sheldon Harnick (lyrics) and Jerry Bock (music) looked back to the early 20th century for a story about family disintegration, religious persecution and widespread displacement, they could well have been looking forward to today. Fiddler on the Roof is at the Capitol in Sydney until early May. 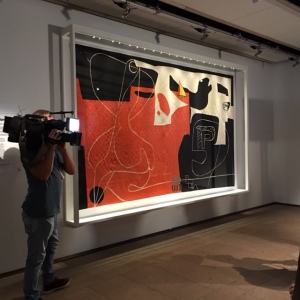 at the Sydney Opera House on March 29 in the Western Foyers. It was commissioned by Jörn Utzon in 1958 when the Danish architect was already thinking about what might be possible in the interior of his magical building (he wanted vibrant colours inside), and delivered to him two years later. Then came his dismissal and the tapestry from the great Swiss-French architect took up residence in the Utzon home. A group of benefactors and SOH staff members helped fund its acquisition at auction last year, it has been restored, and now hangs in the Opera House as a tribute to Utzon – not to mention its value as a work from the imagination of one of the key architects of the 20th century. If you’re in Sydney don’t fail to pop down to the Western Foyers to take a look.