A woman climbs, higher and higher, on a path made by the bodies of other dancers. Later she will descend and fall, but her head will be caught by an enigmatic figure in black. Here, and at every point in Graeme Murphy’s deeply affecting Air and Other Invisible Forces, there are intimations of death, loss and grief but there’s transcendence too. Love blooms, life continues its inevitable cycle.

One of Murphy’s great attributes is that he never shies away from emotion. There are repeated motifs of cradled heads, arms encircling bodies, individuals enclosed protectively or physically supported by the group. A woman nuzzles a man’s back; he walks his fingers towards her. This is what being truly human looks like. 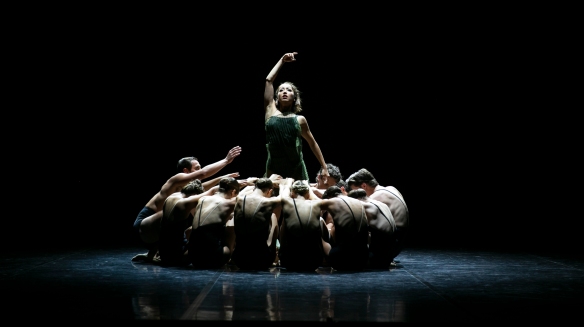 Made in 1999 to Giya Kancheli’s moving lament Mourned by the Wind, Air and Other Invisible Forces still goes straight to the heart, even in the reduced form seen in West Australian Ballet’s 2020 Quarry season. There will be an extended staging (although not the complete work) in Perth mid-year, with the added bonus of Gerard Manion’s gorgeous designs that were no less than another dancer in the piece.

It will be a rare treat. I can’t think of another Australian company that has programmed dances Murphy made originally for SDC, apart from selections performed by The Australian Ballet in its 2018 Murphy tribute.

The Murphy extract opened the Quarry triple bill, followed by the world premiere of Dutch choreographer Wubkje Kuindersma’s Architecture of Hope. It’s a good-looking, well-constructed piece for four couples to the music of Ezio Bosso, although somewhat old-fashioned in its view of gender roles. I don’t really want to see women lie at men’s feet or flung over shoulders as if unconscious. But it’s still relatively early in Kuindersma’s career and she clearly has lots of good ideas to go with the more time-worn ones.  I particularly enjoyed the bounteous curtseys to the audience, the most obvious expression of Kuindersma’s thesis – that choreography “creates a space in which human connection is established – not only between the dancers themselves but also between the dancers and then audience”.

Matthew Lehmann and Dayana Hardy Acuña in In Light and Shadow

Krzysztof Pastor’s In Light and Shadow is a rip-snorter to the music of Bach and an uplifting end to the evening. After a lovely pas de deux to the aria from the Goldberg Variations, 16 dancers whizz about joyously to the Orchestral Suite No 3, contemporary ballet and the baroque finding a whole lot in common and having the best time.

On opening night the WAB women shone brightest. Best of the best were Dayana Hardy Acuña, Candice Adea, Carina Roberts, the ever-striking Polly Hilton and Glenda Garcia Gomez superb in what will always be thought of as the Janet Vernon role in Air. Chihiro Nomura was divine in Murphy’s and Pastor’s works. Her artistry just grows and grows.

Ballet at the Quarry ends on February 29