RUTHLESS! The Musical could with much accuracy be called Shameless!

As it charts the incident-packed life of a stage-obsessed tyke and her perhaps not so ordinary Mom, Ruthless! cheerfully plunders Gypsy and All About Eve for characters and motivations and pays homage to any number of Broadway shows, including of course the most aspirational of them all, A Chorus Line. 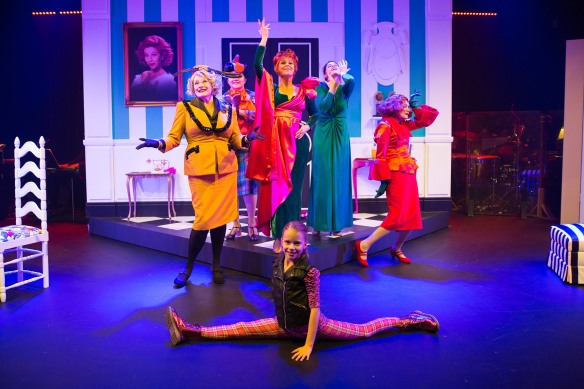 Which means, of course, if you don’t know your Broadway from your Brecht you may be rather at sea in a show that exists only to send up an unhealthy hunger for fame. I was going to say it satirises the pursuit of the spotlight, but that would be giving Ruthless!, written in 1992 by Joel Paley (book and lyrics) and Marvin Laird (music), a bit too much credit. It’s a fun, bubbly cartoon given a terrific production by a newish Sydney company called The Theatre Division and best enjoyed with a drink in your hand and a show tune in your heart.

Tina Denmark (on opening night Madison Russo, who shares the role with Jade Gillis) is an all-singing, all-dancing pint-sized bundle of ambition who is devastated when she fails to win the leading role in her school musical, Pippi in Tahiti. Look out Louise Lerman (Caitlin Berry), the less talented but much better connected student who gets the part.

Also in the mix are the mysterious Sylvia St Croix (Meredith O’Reilly), who is also desperate to see Tina get to the top; third-grade teacher Miss Block (Margi de Ferranti); the poisonous theatre critic and grandmother to Tina, Lita Encore (Geraldine Turner); and Tina’s mother Judy (Katrina Retallick), who undergoes a dazzling transformation during interval.

The camp-o-meter is turned up to 15 and the stage set for revelations that are flagged as obviously as a Panamanian ship of convenience. Obviously there’s only way to sell this material, and that’s to go big, or preferably bigger. Director Lisa Freshwater has assembled just the cast to do that, with Retallick proving yet again that she’s a sparkling comedienne. The Sydney Theatre Award she won this year for Dirty Rotten Scoundrels (speaking of shameless, that was a plug for awards in which I am involved) was no fluke. Turner gives a star’s turn as the bitchy journalist and young Russo is ridiculously talented and apparently knows no fear. But everyone is terrific, as are Mason Browne’s amusing and cleverly conceived set and costume designs and Neil Grigg’s splendid hats.

The sound balance seemed a bit out of whack to start with on Friday night but either it or my ears settled down, enabling better appreciation of the small band under Brad Miller’s musical direction.

In truth Ruthless! runs out of steam towards the end of a not very long show, but the attractive exuberance of cast and production gets it across the line.