ADENA Jacobs’s production of Hedda Gabler is perverse not for her casting of a man as Hedda – it’s an intriguing starting point – but for the failure to make anything much of it. Belvoir’s Hedda Gabler is weightless to quite a marvellous degree.

Jacobs writes in her adaptor and director’s note: “A contemporary Hedda is not trapped by the same circumstances or social conventions which plagued women a century ago. At any moment she could get up and leave. Why doesn’t she?” Good question, and one to which this production has no answer. 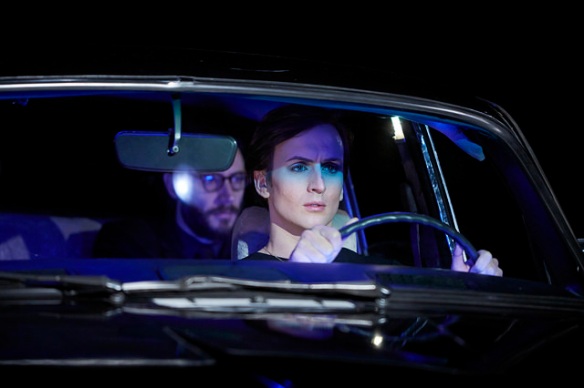 Condensed to a vigorously pruned 90-minute piece, Jacobs’s adaptation places Hedda (Ash Flanders) in Los Angeles in the present day. Dayna Morrissey’s set evokes a glossy, soulless home with lots of glass, although it appears to have been designed for a theatre other than Belvoir’s Upstairs space. It is far from ideal, although successfully suggests well-heeled emptiness. There’s a pool for Hedda to lounge by and she spends much of the time in a swimsuit. Her apathy is palpable, and if Hedda Gabler were a play about a vacuous woman who is bored out of her skull it would be job done.

Quite a lot of Ibsen is still there from a plot perspective, although it’s like hearing a familiar song in a different language. You can hear the words but they don’t make much sense in the context or are thrown into a new light by it. There’s no suggestion in performance of Hedda’s barely contained rage or, oddly given the casting, her exceptionalism. Her few off-hand minutes of playing a violent video game must suffice to indicate the former; for the latter, a silent tableau shows us more precisely what we can already see: Flanders is, for the purposes of this production, of fluid gender. What this means is unexplored. That the idea exists is all we are given.

Ennui reigns so it makes internal sense that some of Jacobs’s 21st century equivalences to Ibsen feel exhausted. The dominating portrait of Hedda’s father, for instance, is banally turned into a big car. It is, presumably, meant to be a symbol of male power and virility – a stale idea -and takes up an awful lot of stage real estate to little effect. (The fuzzily amplified scene that takes place within the car is woeful.) Particularly diluted is the rendering of Hedda’s cruelty towards Aunt Julie. In Ibsen she pretends Julie’s new hat belongs to the servant; Jacobs translates this as Julie’s having left a can of drink on the car. The moment passes swiftly and leaves no trace.

Most crucially, Ash Flanders drifts through and around the action in a cocoon of disconnectedness. This chilly space at the centre of things makes it difficult to understand what Jacobs wants Flanders to bring to Hedda when the actor gives off so little. (The putting on and taking off of a wig a couple of times has the air of being rather meaningful but isn’t.)

Would this Hedda kill herself because Brack – Marcus Graham, definitely best in class here – threatens the General’s daughter with a touch of scandal? Not this cool cucumber. When Hedda hears of the manner of Lovborg’s death I would not have been surprised to hear her say: “No vine leaves? Whatever.”

By virtue of his gender Flanders can’t help but remind one of Hedda’s otherness, or at least what we are supposed to recognise as her otherness, but the audience is left to do a lot of intellectual gymnastics to make the performance and the production resonate. The production is arid and uninvolving because this Hedda, far from existing restlessly beyond the boundaries of the society she finds herself in, is exactly like everyone else: as small and shallow as the pool in Morrissey’s set.