MATTHEW Bourne’s Swan Lake was a sensation when it premiered in 1995 and nearly 20 years later it is as gripping as ever. Swan Lake is surely the ballet text most frequently reinterpreted, whether tweaked minimally or extensively altered, but no version has captured the public’s imagination as tenaciously as Bourne’s.

His underlying story is faithful to its source – melancholy Prince, mystical lakeside encounter with swans, ultimate tragedy – but super-charged by the brilliant flash of insight that reimagined the swans as a preening, hissing, menacing, all-male herd. The dancing may be a bit rough around the edges and the choreography repetitive, but there is real drama in the rippling shoulders, angled elbows and wrists, aggressively whirled legs, torqueing torsos and bare chests gleaming with sweat.

As the mind of Bourne’s lost-soul Prince unravels he is drawn to the swans’ authority and masculinity. The creatures are dangerously attractive (except for the four cygnets, a sweetly silly bunch of juveniles), particularly in the high-octane way Bourne depicts the opposing forces usually represented by Odette and Odile. Here they are embodied in Swan and Stranger – fantasy figure of salvation and the duplicitous seducer who leads to ruin. Bourne’s leather-clad, gate-crashing, omni-sexual Stranger is exceptionally witty, even if on opening night Jonathan Ollivier wasn’t as charismatic in this aspect of his dual role as he was lakeside, where he looked magisterial in the frozen sculptural moments that so effectively interrupt the swans’ flurries.

Despite the implication of same-sex love, this Swan Lake is far less an expression of sexual discovery than of finding a place to belong. At his lowest ebb the Prince, unceremoniously chucked out of a nightclub, has thoughts of death. Behind him in the gloom is a big billboard advertising Swan Vesta matches, and in the hazy distance we see half-man, half-bird creatures swoop and swirl. The lake calls, death beckons, and then comes a vision of wild freedom, which the Prince wants but is inadequately equipped to grasp.

When the Prince (Chris Marney in the first Melbourne cast) dances with the imposing Swan there is joy and abandon, but the closest contact is expressed through clinging. The Prince is a drowning man in need of rescue from a royal court peopled with toadying servants and libidinous Eurotrash, presided over by a Queen (Stephanie Billers) who shrinks from her needy son. 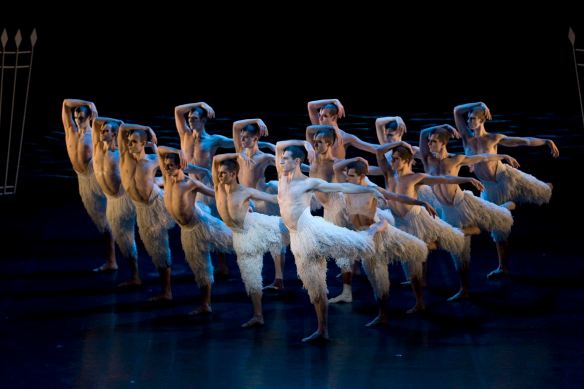 Marney is a fine, poetic dancer who touchingly illuminated the Prince’s stretched, yearning choreography. He was very much odd man out in this brash, broad-strokes world – one in which Tchaikovsky’s most rousing Act I music accompanies energetic nightclub exertions and the Act III Russian dance becomes a pas de deux for sadomasochists. There’s a vulgar Girlfriend (Anjali Mehra) and even – this is a wink to the cognoscenti – a fond parody of Romantic ballet when the Royal family goes to the theatre.

Bourne’s cheeky pastoral-supernatural pastiche has a strong whiff of the music hall, a reminder that British ballet was, at one time, chiefly seen on the variety stage and was enjoyed as general entertainment, just as Bourne’s Swan Lake is. I first saw it on London’s West End shortly after its Sadler’s Wells premiere in the presence of an audience thrilled to its core. It was said to be the first ballet produced commercially since Diaghilev’s financially disastrous season of The Sleeping Princess – his title for The Sleeping Beauty – in 1921-22. Diaghilev had to flee England to escape his creditors; Bourne was more successful, enjoying West End revivals, Broadway and Tony awards. (Bourne, by the way, doesn’t categorise his Swan Lake as ballet, and he’s right. It’s more accurately described as dance-drama.)

It is testament to the robustness of Bourne’s vision that it survives circumstances that are far from ideal. Melbourne’s vast Regent Theatre dilutes the claustrophobic, nightmarish qualities of the piece (in Sydney Swan Lake will be seen at the smaller Theatre Royal) and time and again the recorded Tchaikovsky score commits assault and battery. Music played live corrals the individual energies of the players into an ultra-sensitive body whose exertions are palpable and affect the responses of dancers and audience members alike. It’s a big loss.

It’s not that the recording is bad (although in some sections speedy to the point of being cartoon-like), but in this venue where there should be intensity or nuance there is merely volume.

The Melbourne opening was also marred by the loss of Swan Lake’s final image, the apotheosis of Swan and Prince. There was a technical glitch, presumably as a result of sets having arrived late from Singapore and the preview having to be cancelled. Such are the trials and perils of touring.

Matthew Bourne’s Swan Lake may not have been perfect on that night but the show went on. I was very happy to have been there.

A version of this review appeared in The Australian on October 20.