GRAEME Murphy’s Swan Lake has been a touchstone production – and a fortunate one – not only for The Australian Ballet as a whole but for many dancers. At its premiere in Melbourne on September 17, 2002, Simone Goldsmith started the evening as a senior artist and ended it as a principal. Steven Heathcote was Prince Siegfried, as he would be so frequently until his retirement in 2007 and Margaret Illman was an unforgettable Baroness von Rothbart, the third party in the tangled triangle at the heart of the ballet.

By the time the production opened in Sydney on November 28, 2002, senior artist Lynette Wills had assumed the role of the Baroness and she, like Goldsmith, found herself promoted to the company’s highest rank at the after-show festivities. She had waited a long time, and this role gave her the breakthrough.

Over the years young dancers who started out as wedding guests or swans in 2002 graduated to larger roles: the corps de ballet list in September 2002 includes Adam Bull, Andrew Killian, Lana Jones, Amber Scott, Leanne Stojmenov and Danielle Rowe, all of whom would become principal artists and dance Odette, Siegfried or the Baroness. All are still with the company with the exception of Rowe, now with Netherlands Dance Theatre.

In the case of Madeleine Eastoe, then a soloist and now a long-serving principal artist, the path to Odette was swift. I first saw her in December of 2002 and most recently five days ago when Swan Lake opened in Sydney. She was lovely then and is extraordinary now.

From the start audiences loved the interpretation created by Murphy, his creative associate Janet Vernon and designer Kristian Fredrikson. It looked absolutely luscious and its story, while being set in an Edwardian world, was clearly influenced by the troubled marriage of Prince Charles and Diana. It was, and is, a wildly glamorous and highly emotional piece of theatre. The AB didn’t hold back. The Murphy Swan Lake has been staged almost every year since 2002, although not always in Australia. It is the work invariably chosen to take on tour and has been seen in Paris, Tokyo, London, New York, Los Angeles and other cities. Later this year it will tour to Beijing.

For this Sydney season Swan Lake continues its role as a trailblazer. It’s not being seen at the AB’s usual home of the Joan Sutherland Theatre at the Sydney Opera House but is at the Capitol, a venue devoted almost exclusively to large-scale musical theatre. Amusingly, this is because the Wicked juggernaut is tying up Queensland Performing Art Centre’s largest theatre, which is where one would expect the AB to be at this time of year – and the Capitol is the very theatre vacated only last month by Wicked before it headed north.

There is obvious potential to broaden the company’s reach beyond the rusted-on ballet crowd by coming to this venue and the undeniable truth is that Swan Lake looks much better on the Capitol stage than at the Opera House (Opera Australia is ensconced there as usual in February so the Joan Sutherland Theatre was unavailable anyway). 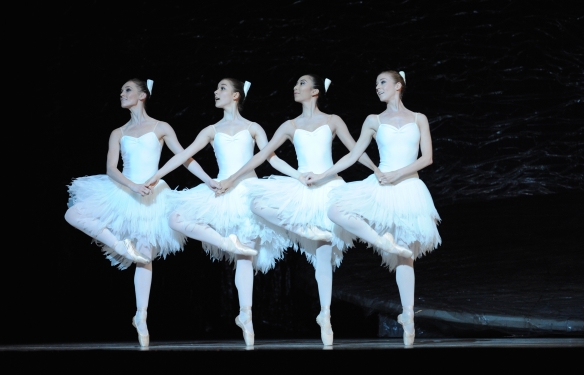 Friday’s opening night was strong, which didn’t surprise given that the company knows the work inside out (this was the 185th performance). What lifted Swan Lake into another realm was the riveting connection between Eastoe and her Siegfried Kevin Jackson. This is truly one of the exceptional partnerships of Australian ballet.

She was all air, light as a feather blown across water; he was all earthy desire and anguish, a flawed and complicated man. As a partner Jackson is not quite in the league (who is?) of Heathcote and Robert Curran – they both danced with Eastoe many times in this ballet – but his immersion in the role and his interpretation of it were electrifying. He wasn’t afraid to look brutal in his treatment of Odette as she unravels on her wedding day, having seen the extent to which Siegfried is in thrall to the Baroness. But he seemed more desperately unhappy and frustrated than a hardened brute, and his Act II lakeside pas de deux was filled with tenderness.

Eastoe has not changed her approach to Odette; she just seems more and more luminous every time. Of the eight Murphy Odettes I’ve seen she is the most heart-rending. Each has had a strongly individual character – a hallmark of this production is that markedly different interpretations are equally valid – but with Eastoe you see innocence slaughtered. It is devastating.

Ako Kondo has exceptional allure but on Friday I thought her vampy Baroness was still a work in progress. In Tuesday’s cast Kondo’s fellow senior artist, Miwako Kubota, was more multi-layered and sympathetic. Kubota made you see the Baroness’s pain as well as her desire. (By the way, Kubota was also in the corps in 2002 when Swan Lake premiered.)

Senior artist Juliet Burnett finally got her chance to dance Odette, and did so partnered by fellow senior artist Rudy Hawkes. It was a persuasive match. Hawkes was an entirely different Siegfried from Jackson. Here was a prince entirely out of his emotional depth, fulfilling his duty as expected and finding things falling apart disastrously and unmanageably on his wedding day. Burnett’s Act I Odette was somewhat spiky in temperament and unstable. This bride, who appears compliant and unsure of herself, is not entirely subservient.

Burnett hasn’t entirely worked these contradictions into a seamless whole. It interests me that Burnett is a very fine writer about dance and thinks deeply about her work; on Tuesday, particularly in Act I, she telegraphed some of that thinking a little too forcefully. When her strong, clear ideas were transformed into action and into feeling they had powerful dramatic authority.

In pure dance terms Burnett and Hawkes had a few moments on Tuesday night that didn’t go entirely to plan – and they were just a few – but they also put their own stamp on the choreography, making many key images entirely fresh with different accents or textures. This is why balletomanes go to a particular ballet repeatedly: not to see it again, but to see it made anew.

Brooke Lockett, Benedicte Bernet, Karen Nanasca and Heidi Martin must now be the Cygnets of choice. They are adorable.

No one does a dash across the stage and hair-raising body-slam as vividly as Reiko Hombo (Young Duchess-to-be).

Sometimes it’s just impossible to erase memories of past exponents of certain roles. Take the Guardian Swans, for example. I can still see Danielle Rowe and Lana Jones. Perfection.

Colin Peasley – what can you say? He’s 80 and still getting out there on stage as the Lord Admiral, as ramrod straight as ever.

4 thoughts on “Everything old is new again”