BY the end of Ladies in Black its sweet, gawky duckling of a heroine has been transformed into a soignée swan, and in just six weeks. Why, without her glasses and with her hair up, young Lisa Miles is quite a looker. Goodbye school, hello world. This is no superficial alteration: Lisa is on the brink of something momentous, a life where she gets to choose who and what she wants to be. If a beautiful, lusted-after dress is part of the picture after years of wearing garments made at home lovingly, but badly, by mum, well that’s OK.

The slender and charming novel that inspired Ladies in Black, Madeleine St John’s The Women in Black, is a comedy of manners and fable of empowerment. Published in 1993 but set in the late 1950s, it casts an amused eye on an Australia slowly emerging from its blokey, monocultural straitjacket. A young woman blossoms; another discovers literature and the attractions of an experienced European man; a long-married woman has a sexual awakening; and the sophistications of a recent arrival to these shores work their magic. There is one delectable discovery after another.

The cast of Ladies in Black

In a version of Jane Austen’s famous two inches of ivory – her “four or five families in a country village”- The Women in Black (and thus Ladies in Black, which is a faithful adaptation) inhabits a deliberately limited world, viewed from a female perspective. Like Austen, St John is witty and acerbic while maintaining an aura of smooth politesse. (How about this seemingly throwaway word in The Women in Black? Men talking about their families “joined in with remarks about their own sons and even their daughters”. Even. It’s a killer.)

St John had long been an expat, living in England where she felt she belonged, but her evocation of Sydney in summer is vivid and not without affection as she expertly registers and skewers the social attitudes and restrictions that drove so many Australians like her to flee (she was at the University of Sydney at the same time as Clive James, Germaine Greer, Robert Hughes and other luminaries). She touches on inequality between the sexes, the limiting of women’s ambition and the galvanising effect of migration with a soupçon of the sexual revolution thrown in for spice – heavy issues all, but rendered with an airy hand. This is the fable part: pretty much everything turns out wonderfully well.

At the centre of the story is Lisa (née Lesley, a name she feels doesn’t quite suit her). She has just finished her exams for the Leaving certificate and secured a holiday job at Goode’s department store, the place to shop in Sydney. She is assigned to Ladies’ Cocktail (not the alcoholic beverage; frocks) and promised as an additional pair of hands to the cosmopolitan Magda in Model Gowns. 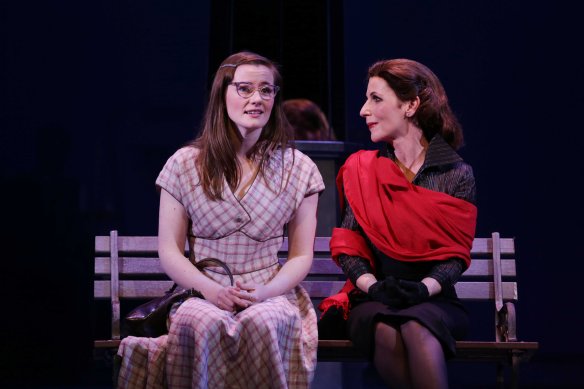 Sarah Morrison as Lisa and Christen O’Leary as Magda

Lisa is a very clever girl and likely to win a Commonwealth Scholarship to university, although as her father points out, what does a girl need with a degree when she’ll shortly be looking after a husband and kiddies? She isn’t a natural rebel but knows her life has more promise than that. The excitingly stylish Magda, a New Australian, as we used to call them (“Continental” to her confrères at Goode’s), treats Lisa like an adult and introduces her to thrilling new ideas. It’s a tumultuous few weeks for all in the domestic sphere and of course at work, where the women are rushed off their feet just before Christmas.

Singer-songwriter Tim Finn came across a copy of The Women in Black at Brisbane Airport and thought it might make a good musical. He hadn’t written one before but seems to be a natural. His openhearted, immediately likeable songs (Finn wrote music and lyrics) are deliciously melodic and flow easily through Carolyn Burns’s lively, compact book. Occasionally the joins show, but Ladies in Black is in excellent shape for a musical having its first outing and succeeds where it really counts by creating warm, believable, engaging characters and by having a top-notch cast bring them to life. Relative unknown Sarah Morrison, who plays Lisa, is a tremendous asset. She is radiant.

Anyone expecting a 21st-century gloss on issues about which it’s difficult to laugh these days will be disappointed. Ladies in Black is about how it was then, bathed in a rosily nostalgic glow that is even equal to the task of laughing at bad husbands. The Bastard Song, sung with sturdy relish by a quartet of women, had the show’s opening-night audience hooting, loving lyrics that include: “He’s a bastard, a bastard, a standard issue bastard, a bastard, coming home half plastered, I don’t know how it’s lasted …” You get the idea.

There’s no room here for cynics, ironists or revolutionaries. Ladies in Black unashamedly plucks the heartstrings and may even cause a certain dampness in the ocular area. For Australian women of a certain age there is much to remember. “I can see the future and everything I’ve dreamed is waiting there for me,” goes the rousing final number, and Ladies in Black means every buoyant, life-affirming word of it.

Queensland Theatre Company, backed by Queensland Performing Arts Centre, threw a lot of resources into Ladies in Black. Set and costumes are by the go-to designer for big occasions, Gabriela Tylesova (the staging boasts three revolves to facilitate the many changes of scene), and director Simon Phillips, who knows a thing or two about musical theatre, is at the helm. There is plenty to admire but the production nevertheless has the feeling of falling somewhat between two stools: it could be done on a rather more intimate scale or, alternatively, would profit from a grander staging with a lot more bells and whistles. There’s no money pit like the musical theatre.

The former outcome is perhaps more likely than the latter but however it goes, Ladies in Black deserves to have an audience after these premiere seasons in Brisbane and, from January 16, in Melbourne.

2 thoughts on “Ladies in Black”