RESISTANCE is useless Earthlings. Little Shop of Horrors is back and roaring for warm blood. Human blood. Your blood. I doubt it will be denied, at least in cult-musicals circles. The greatly cherished show has an almost mystical following and, with this production, should recruit a new generation of devotees.

To recap: after an unusual atmospheric disturbance, lovable loser Seymour Krelborn (Brent Hill) stumbles upon a weird plant and brings it back to the drooping Skid Row florist shop where he works alongside another of life’s punching bags, self-sabotaging Audrey (Esther Hannaford). Given the name Audrey II by lovesick Seymour, the plant soon reveals itself to be carnivorous. Rapaciously so. What could possibly go wrong? And what will nebbish Seymour do to hold on to his dreams once he becomes something of a celebrity thanks to Audrey II, with a concomitant boost to his previously minimal store of courage? 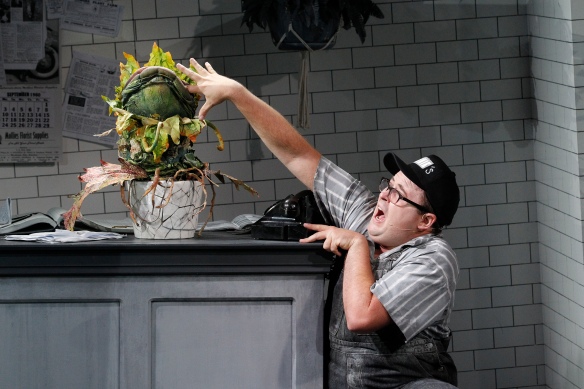 Howard Ashman and Alan Menken’s musical takes its B-grade schlock-horror plot from a 1960 Roger Corman quickie film but it has much more heart and substance than that may suggest. At the Hayes, in a tightrope act pulled off with impeccable style and sophistication, director Dean Bryant expertly digs into the multiplicity of dark interpretations implicit in the text while keeping things light and fleet enough on the surface to keep the laughs coming.

Hanging over the story are those mid-20th century fears of invasion and subjugation in which aliens stood in for the enemy at the gate (think Orson Welles’s broadcast of The War of the Worlds and John Wyndham’s novel The Day of the Triffids just to name two). These fears are not entirely unknown today. Little Shop of Horrors is also a cautionary tale about the dangerous seductions of fame and money, particularly for someone as innocent as Seymour.

But it’s the central story of doomed love and impossible aspirations that Bryant and his production team really hit hard and strong, just as they did in 2014 with their thrilling reworking of Sweet Charity.

Little Shop of Horrors premiered Off-Broadway in 1982, distant enough from Corman’s film to be able to indulge in fond nostalgia for the 1960s and having it both ways by casting an arch but critical eye over the lingering 1950s social values of the time. Bryant sails audaciously close to the wind in his conceptions of Audrey and Seymour. When we first see Hannaford’s Audrey her emotional fragility is heightened dramatically by the production design, an expressionistic rendering of the dismal grey lives of the denizens of Skid Row. Hannaford looks wraith-like and her not-entirely-American accent and twitchy, fey gestures make her seem already not of this world. 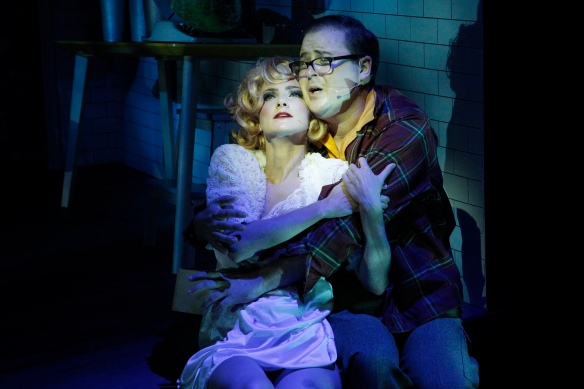 Audrey’s resigned subservience to her sadistic dentist boyfriend Orin Scrivello DDS (Scott Johnson) – she’s never allowed to forget Orin’s academic credentials – is exceptionally painful and gives exceptional poignancy to her wistful fantasy of a safe, well-appointed home (Somewhere That’s Green). The song is funny and heartbreaking all at once and Hannaford is attuned to every nuance. To hear her wish for not only a washer but a dryer too is to hear an entire life story. Hannaford’s performance is exquisitely calibrated: strange, beautiful and unearthly, even when raising the roof with Hill’s Seymour in Suddenly Seymour, where tenderness and a thumping great love ballad collide magnificently.

From Hill, also in tour-de-force vocal and dramatic form, we get to understand that even someone as sweet and gentle as Seymour is liable to turn into a kind of monster if he chooses to make compact with one. Still, that might be better than what he had to start with, no? And anyway, once on that slippery slope there’s no getting off.

While Hill and Hannaford are the glorious linchpin, the full cast of nine is a knockout, particularly Angelique Cassimatis, Josie Lane and Chloe Zuel as a sassy, sexy Greek chorus in close-harmony girl-group guise and Scott Johnson’s pure macho evil as Orin that makes you laugh and gasp in horror all at once.

As can often happen at the Hayes on opening night the sound from music director Andrew Warboys’s small band was sometimes too boomy and precious lyrics were smothered. It’s a hard space to get right it would seem, but one is grateful for the gems it produces. One more thing: Little Shop looks too big for the 110-seat Hayes, but this was always likely. There’s a national tour ahead in more capacious venues.

This is an expanded version of a review that appeared in The Australian on February 25.

Little Shop of Horrors ends in Sydney on March 19. Adelaide from April 20, Melbourne from May 4, Canberra from May 25, Brisbane from June 1, Perth from August 4.