Sydney’s Hayes Theatre Co was the venue for another in the invaluable Neglected Musicals series (June 21). Rehearsal is minimal (a day only), there may be a sketchy set and a few props, and the actors – always very, very good – have books in hand. By some strange alchemy it always feels like a proper show. I’ve seen some beauties. Unfortunately Baby the Musical (1983) can’t be counted among them. We were told it was nominated for seven Tony awards but had the misfortune to be up against Sunday in the Park with George and La Cage aux Folles. Yes, well. I think it was kind of making up the category, as its competition included The Tap Dance Kid (I admit that’s a title entirely new to me) and Kander and Ebb’s The Rink, which did not meet with much critical favour and didn’t last a year (nor did Baby). Baby is little more than an extended skit really about three couples expecting a baby or hoping to. That’s it. Music is by David Shire, lyrics by Richard Maltby Jr and the book by Sybille Pearson. They’re not particularly scintillating except for the big women’s number I Want it All. That still works. The generous actors giving their all at the Hayes included Katrina Retallick, David Whitney (both fabulous) and the incredibly plucky Kate Maree Hoolihan who powered through a respiratory illness to keep the curtain up.

Next in Neglected Musicals (from August 3 for six performances) is Sammy Fain and Paul Francis Webster’s Calamity Jane, starring Virginia Gay. I’m absolutely up for that one.

Nederlands Dans Theater had one thing people could agree on during its brief Melbourne visit: the magnetism, authority and power of its dancers. Responses to the program (June 22) were more mixed. The evening opened and closed with works choreographed by NDT artistic director Paul Lightfoot and his associate Sol León that were long on visual glamour but rather shorter on emotional and visceral satisfaction. 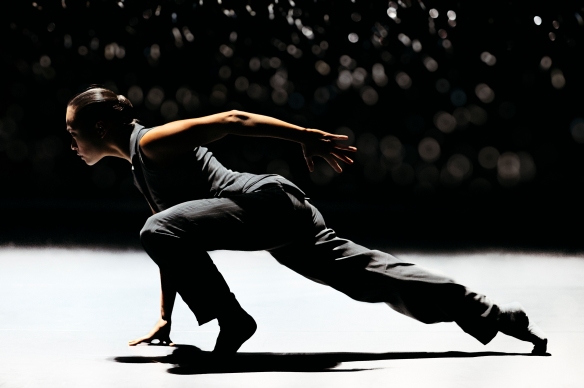 Sehnsucht (2009) was simultaneously overwrought and underdone. A man and a women played out a domestic drama in a small rotating box slightly elevated and set back – a kind of square tumble-drier with fixed table and chair and a window for escaping through. In front of them a solitary man emoted to Beethoven piano sonatas. In the second half a large ensemble was borne along by the majesty of Beethoven’s fifth symphony, although the connection between dance and music was tenuous. I couldn’t tell why this work in particular and not another one. One couldn’t deny, however, that Beethoven provided a thrillingly strong, familiar beat. The dancers looked marvelous, of course, although I did feel for Prince Credell, the solo man, who was forced to crouch at the front of the stage when Sehnsucht – the word suggests intense yearning – ended. The auditorium lights came up, he stayed, the audience stood about a bit and then he slowly unfurled himself.

Lightfoot/León’s Stop-Motion (2014), to music by Max Richter, had a similarly glossy air without convincing one that it meant anything other than generalised anguish. Too often the dancers stopped and posed either in arabesque or with legs held high to the side, either straight or with a bent knee. One admired the control, but admiring technical skill, particularly when invited to do so again and again, can get rather tiresome. Sehnsucht would have given the program a more striking ending but as Stop-Motion ends with quantities of flour being thrown about the stage, logistics demanded it closed the evening.

Thanks goodness for the central work (in all senses), Crystal Pite’s Solo Echo. There was a backdrop of falling snow, Brahms piano and cello sonatas, and an aching sense of need and loss. In the crepuscular light dancers swirled, slid and connected as if their lives depended on it. Breathtaking is an overused and frequently meaningless word of praise. Here it was entirely apposite. I wasn’t aware of myself, those around me, or of the need to breathe. Those dancers, that dance, that music, that experience filled every moment.

I won’t say too much about West Australian Ballet’s Genesis program (seen June 23) because I serve as a member of the company’s artistic review panel. The program gives WAB dancers a chance to develop their choreographic skills and is a vital part of the operation, as it is with Queensland Ballet’s Dance Dialogues. The Australian Ballet’s Bodytorque program seems to have disappeared, although this year two alumni, Alice Topp and Richard House, had work programmed as part of the AB’s mainstage season. At WAB just-retired principal artist Jayne Smeulders and soloist Andre Santos have made it to the mainstage via earlier workshops.

You will note I name two women, which is cause for rejoicing. One of the hot topics of conversation in classical dance is the scarcity – it’s close to complete absence – of female choreographers, although Crystal Pite is breaking through, as she deserves to. At WAB this year a gratifying number of women were represented: Polly Hilton, Florence Leroux-Coléno and Melissa Boniface stepped up to the plate alongside Santos, Christopher Hill, Adam Alzaim and Alessio Scognamiglio.