It was a stroke of genius to build this knotty, sometimes exasperating, always fascinating piece about mortality around the playing of a brass band. Breath. That’s the fundamental thing – breathe in, breathe out. If that is happening, we are still alive.

Wim Opbrouck shambles into a room being set up for a band rehearsal and readies himself to make music. The man used to be a trombonist; now he is too sick for the kind of effort required (“death put a flower in my mouth”, he says; that would be cancer) but he can still make a noise. Cymbals, singing, humming, gargling, talking and the panting that comes from having danced: these are still at his disposal as he chooses not to go gentle into that good night.

It’s the oldest story in the world really, the one about dying, but En avant, marche!, from festival regulars Les Ballets C de la B and theatre company NTGent, is also a heart-swelling hymn to courage and resilience. To marching on. 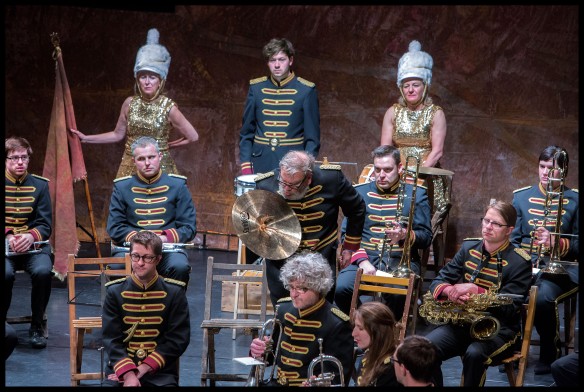 In each place En avant, marche! is performed, the production augments its stunning core of musician-singers and actors with a local band – here the wonderful Brisbane Excelsior Band – and the sense of community already embedded in the piece is brilliantly amplified. The room gleams with the shine of trumpets, saxophones, tubas, horns, euphoniums and trombones and is given gravitas by the wearing of formal uniforms.

At one point a few members are asked by Opbrouck to say what they do for a living. In the Brisbane Excelsior Band there are, not surprisingly, some music teachers. There are a couple of engineers. And surely it wasn’t fiction when on opening night one player said he was a funeral director. I do hope not. The rightness of it is absolute.

En avant, marche! throws comedy, dance, music and philosophy together in an anarchic mix that is occasionally baffling and, it must be said, sometimes alienating as a selection of European languages gets an outing. The temperature dips from time to time and the focus can be unclear, but hey, that’s life.

Always there is the music to hold on to, weaving in and out of the action under the serene direction of Steven Prengels. It is, for the most part, comfortingly familiar, consoling and uplifting. Included are selections from opera (Aida; the Miserere from Il trovatore; the luminous quartet from Fidelio, which is gently hummed). There is the nobility of Elgar’s Nimrod and Schubert’s exquisite love letter to music, An die Musik.

Most ravishing is Jupiter’s hymn from Holst’s The Planets. It ends En avant, marche! on a transcendent note. You might think of Holst’s title for the suite from which this comes, Jupiter, the Bringer of Jollity, or else the English hymn written to Holst’s melody, I Vow to Thee My Country. Or both really: in En avant marche! laughter and death collide and the impermanence of life holds hands with the imperishability of great music. En avant.