Michael Keegan-Dolan’s Swan Lake is unsparingly black in so many ways, starting with its indelible image of a near-naked, bleating man tethered to a block of concrete. The people in this midlands Irish community are damaged, the humour plentiful but grim and the prospects grimmer.

“Nature is stronger than will,” says the inappropriately named Holy Man (actor Mikel Murfi), describing the appalling event that led to the disappearance of four young women and their transformation into swans. Murfi, our narrator, will later also morph into a despotic county politician and the local law. There’s not much difference between them. They’re all called McLoughlin, petty tyrants each one. 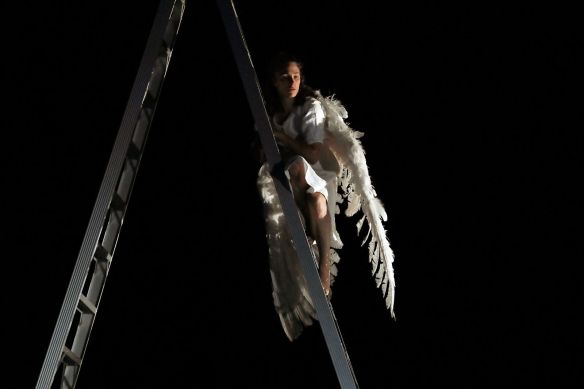 The bare surroundings – some scaffolding, a few ladders – speak of the town’s poverty, not just in material things but in spirit. The ghastly birthday party (funny, though) sums things up. It’s thrown by Nancy for her son Jimmy so he might meet a local girl, shake off his depression and get married. Things don’t look promising.

In amongst the wreckage, though, there is great beauty and freedom. Keegan-Dolan’s depiction of abuse and debilitating grief doesn’t deny the harshness of life but he mitigates it with the consolation of optimism. The abiding memories of Loch na hEala are a love duet of exquisite tenderness and white feathers banishing the darkness as music plays and the ensemble dances joyously.

The story of a woman turned into a bird or sea creature is found in many mythologies, including Irish legend. Keegan-Dolan takes from that and is also strikingly faithful to the essentials of the familiar 19th-century ballet version while making them utterly contemporary.

His emotionally frozen anti-hero, Jimmy (Alexander Leonhartsberger), finds release when he meets swan-woman Fionnuala (Rachel Poirier) by the lake. His flinching tentativeness when he first sees Fionnuala is deeply touching and so right. Keegan-Dolan has a splendid eye for detail. 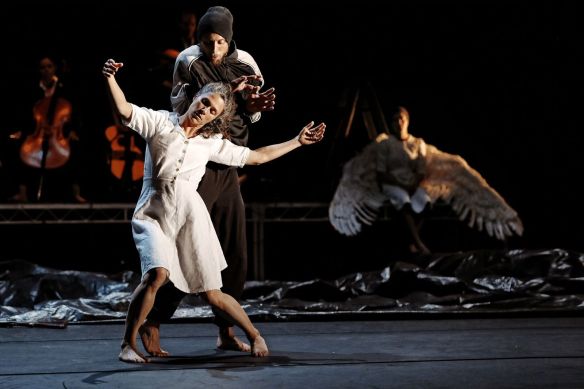 Jimmy and Fionnuala can’t escape their fate but they are part of a much larger and longer history of endurance and resilience. Their sublime second pas de deux is an unforgettable paean to the power of love over malignity even as Keegan-Dolan doesn’t shy away from showing the pain that surrounds them.

Keegan-Dolan, who wrote the brilliant text as well as choreographed and directed, blends folk-inspired dance, spoken word and music into a seamless whole. The marvellous trio Slow Moving Clouds plays and sings Celtic and Nordic melodies live and the nine-member dance ensemble makes the heart sing. It’s a pity the season was so brief.

This review first appeared in The Australian on September 1.