The idea is transfixing. Three of the greatest 20th century contemporary choreographers come to grips with Beethoven’s Grosse Fugue, a monumentally knotty piece of music first performed in 1876, the year before the composer died, and far from an obvious choice for a dancemaker.

This Lyon Opera Ballet program came together in 2016 when the company asked American legend Lucinda Childs to create her Grande Fugue to join others already in the company’s repertoire by Anne Teresa De Keersmaeker and Maguy Marin. Stylistically the works are completely different from one another and make one hear the music anew each time, particularly as three different recordings are used.

There are, not surprisingly, similarities in dynamics imposed by the score but they are achieved in strikingly individual ways. Equally striking is the way in which the program is structured, starting with a dozen dancers, then eight and then four. It beings with Childs’s serene classicism for 12 dancers in six male-female pairs. The look is austere as the couples establish themes, wind them in and out, reverse and expand on them. It is performed with a quiet, luminous kind of virtuosity that makes the dancers seem almost weightless as they skim across the stage. The delicate tracery of designer Dominique Drillot’s projections behind them adds a layer of visual complexity and an air of mystery.

Childs’s response to the music is coolly intellectual. Belgium’s De Keersmaeker, up next with Die Grosse Fuge from 1992 (it has been revised several times), raises the temperature with an attacking piece that gives two women and six men a stirringly athletic, sophisticated workout. They are dressed alike in black suits and white shirts, a sharp look that becomes increasingly dishevelled as the dance unfolds. If Childs was clarity itself regarding the structure of the fugue, De Keersmaeker is more about accents. The dancers run, roll, fall, leap into energetic jetes and throw in tough little jumps. 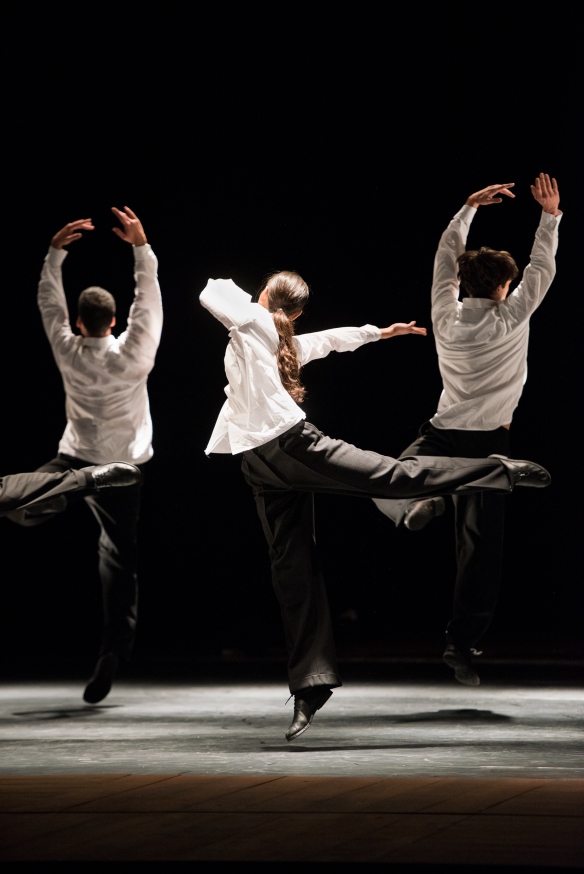 The contained atmosphere of the Childs work has given way to freedom and risk, further developed in the closing dance from French iconoclast Maguy Marin. (One could almost believe the three women made their pieces at the same time after detailed discussion with one another. They didn’t.) Marin brings the numbers down again. Made for four women in 2001, her Grosse Fuge is at once intimate and vast in scope. This is where emotion comes into play; here the music is a mighty storm that propels and buffets the women, all dressed in fierce red, as they gird their loins for life’s struggles.

The four skip and stagger and their outstretched feet have nothing of ballet’s arched precision. There’s nothing remotely pretty about their hunched backs, scrunched up shoulders, wildly kicking legs and punchy arms. There is, though, something greatly moving in their desperation and the defiance that makes them get back up again after they tumble. It’s an engrossing work.

Lyon Opera Ballet has been having its own struggles in the past few weeks following the dismissal of artistic director Yorgos Loukos over his treatment of a dancer returning from maternity leave. If the company is in tumult you wouldn’t know it, but the ferociously complicated music seems about right for the times.

After Adelaide Festival performances the company travelled to the New Zealand Festival of the Arts in Wellington, where the final performance of Trois Grandes Fugues takes place tonight.