Synergy is a small, unpretentious program that’s partly a place where emerging choreographers can test their capabilities and partly where Queensland Ballet’s Young Artists and members of its Pre-Professional year can get some stage time. Both these things are important aspects of QB’s remit but, at least in this year’s iteration, the focus is unclear.

Synergy 2019 puts new work by three highly experienced dance-makers alongside that of two neophytes and casts dancers from QB’s main company as the featured performers in three of the five works. That doesn’t exactly translate to boundless opportunity for the up-and-comers.

QB’s chief ballet master Greg Horsman is a man with extensive choreographic credits and his Never, Stop Falling in Love could easily pop up on a mainstage triple bill. It’s certainly more engaging than Trey McIntyre’s new The Shadows Behind Us that premiered recently in QB’s Masters Series. The works have some similarities, being danced to popular music interpreted by intriguing artists: jazz singer Jimmy Scott in the McIntyre; genre-hopping “little orchestra” Pink Martini for Horsman.

In Never, Stop Falling in Love three QB couples dance sultry duos while Young Artists weave in and out, promenading or dancing together as if it were a late summer’s evening on the boardwalk. Horsman’s theme of love – no more, no less – may not be earth-shattering but Never, Stop Falling in Love has plenty of charm and leaves a warm glow as it brings the evening to a close. 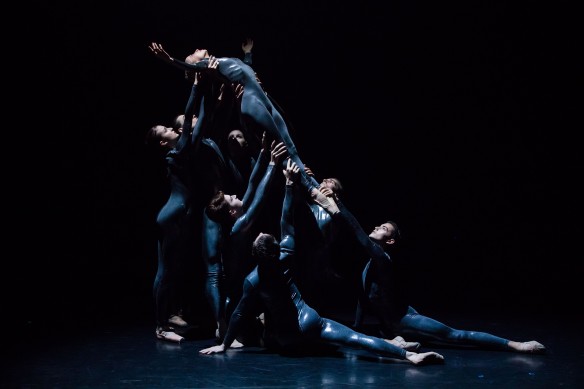 Paul Knobloch’s Magnetic Fields, to the music of the seemingly ubiquitous Ludovico Einaudi, is a strong opener. Knobloch is a former dancer with The Australian Ballet, currently a ballet master with that company and has been making dances for more than a decade. Magnetic Fields is danced wonderfully by the 12 Young Artists who later backed up in Never, Stop Falling in Love but here they are the main game. Wearing close-fitting metallic bodysuits, they attract and repel one another, forming and reforming into ever-shifting huddles and lines. The work is entirely abstract but in several solos there’s a suggestion of the individual standing apart from the group, sometimes tentatively, sometimes forcefully.

Camilo Ramos and Lina Kim in The Cloud of Unknowing. Photo:David Kelly

The third professional choreographer is former Expressions Dance Company artistic director and former Australian Ballet resident choreographer Natalie Weir. Her pas de deux The Cloud of Unknowing, to music of the same name by Gerard Brophy, is another meditation on love, this time involving conflict. QB dancers Lina Kim and Camilo Ramos gave it their considerable all but it’s a forgettable piece with no compelling reason for being on the program.

Company dancer Lou Spichtig sparked the interest with a short narrative work performed by QB dancers Chiara Gonzalez, D’Arcy Brazier and Liam Geck. Spichtig based Demain dès L’Aube on a Victor Hugo poem she learned as a child so it has a lot of personal meaning for her, even if the work feels a little old-fashioned coming from the hands of such a young woman.

Hugo’s daughter made a marriage of which he didn’t approve, causing a deep rift between father and child. She died by drowning, something Hugo only learned about by reading a newspaper report. Spichtig lays out the story clearly, gracefully and with a good grasp of dramatic tension and structure. Her choice of music by Schnittke, Chopin and others is apt and her work quite unlike any others on the program. Spichtig is definitely worth encouraging.

Interestingly, the work that resonates most strongly happens to be by an emerging choreographer, QB dancer Pol Andrés Thió, and a 14-strong cast entirely drawn from the Pre-Professional Program. Thió describes Always in Flight as being “about how we experience art when we find meaning in it”. That concept isn’t easily discerned in the work, but never mind. It looks terrific and has a distinctive voice.

Always in Flight opens with two women in the most basic, unassertive costume imaginable: flesh-coloured leotards and tights that make the dancers look both innocent and vulnerable. Their interactions are physically simple but emotionally complicated – wary, perhaps, but supportive too as one lifts the other.

One woman seems cast as the outsider as men dressed in black flood the stage and other women join the group, they in loose trousers, their long hair flowing. Later everyone wears a long skirt and the lone woman is persuaded, briefly, to don one too. There is an enigmatic interlude in which we hear only the woman’s harsh breathing as she hunches her shoulders as if in distress, an image returned to at the end.

Thió’s handling of this large group is impressive. He has a good sense of ebb, flow and dynamics and the music by Moses Sumney, Hiatus Kayote and Aram Khachaturian is used effectively – not always the case when such different musicians are put alongside one another.

Synergy is performed without sets but with highly expert contributions from costume designers Noelene Hill and Fiona Holley and lighting  designers Cameron Goerg and Scott Chiverton.