IT’S one of the Australian Ballet’s most striking images.

Olivia Bell looks at the camera with a cool expression, her head inclined slightly downwards so the effect is of mystery rather than direct challenge. Her hands are on her hips and her weight is placed on her left leg, giving her torso a lithe S-bend. She looks strong, sleek, glamorous, ultra-modern and enigmatic.

That’s about right. Justin Smith’s photo was taken in 2005, two years before Bell became a principal artist at the AB and was a promotional image rather than a production shot, but it astutely captured the qualities Bell brought to the stage as one of the AB’s top-ranked dancers.

Last night Bell, 35, called it quits, retiring after a glowing performance of Paquita at the Sydney Opera House. Bell has for some years tried to juggle dance and the demands of being a mother – and not just of one child, but of three, including twins. This in a company that moves around more than most. Indeed, it’s a tribute to the AB and its enlightened maternity leave provisions that Bell had been able to stay this long.

Newcastle-born Bell trained at the Paris Opera Ballet School after winning a scholarship at the Prix de Lausanne. Her pristine, elegant line and sophisticated demeanour are no doubt legacies of that time. She joined the AB in 1995.

Bell was also marked out by her imposing height. Speaking at the time of her elevation to principal in December, 2007, the AB’s artistic director, David McAllister, told me: “She owns up to five feet nine and three quarters (177cm), which is really five feet 10.” On pointe, of course, Bell easily broke the 180cm mark. Fortunately the AB soon had Adam Bull on hand, who at 193cm is the tallest man in the company. His partnering in Paquita last night presented Bell exactly as she should have been, as a glittering, precious jewel.

Bell’s notable roles included the Baroness in Graeme Murphy’s Swan Lake, Zobeide in Scheherazade, Choleric in Balanchine’s The Four Temperaments and the Sugar Plum Fairy in the Peter Wright version of Nutcracker, the role she danced on the night of her promotion to principal. She was a powerful presence in Kylian and Forsythe works.

Bell said after last night’s performance that there would be others to replace her. Yes, of course there are always other dancers, but from the beginning of her time at the AB to the end, there has been no other dancer like her.

When Bell bowed out, at about 8pm last night after the one-act Paquita, the AB had 10 principal artists remaining – five women and five men. When the evening’s main event, La Sylphide, ended the AB had a new star, Chengwu Guo. McAllister came onstage to announce his elevation to the top rank after Guo had given a luminous performance as James. His technical gifts are prodigious and were used entirely in the service of the Bournonville style. I saw him earlier in the run as well as last night and was enchanted not only with his swift, brilliant footwork, soaring elevation and beautifully placed upper body, but with the way he had thought about the character in a manner right for him.

As I wrote in my DJ’s Diary on November 16: “Guo was a soaring James in La Sylphide, his command of shape and structure magnificent and his elevation a thing of immense beauty. He looked as feather-light as his Sylph on this occasion, Reiko Hombo. In the mix’n’match season Guo also partners Ako Kondo and Miwako Kubota. Guo is obviously the next male principal artist of the Australian Ballet. Just a matter of when. Do see him if you can.” McAllister has wisely wasted no time. (On the subject of Kubota, she was Guo’s Sylph last night and danced with gossamer lightness and fascinating shades of character. A memorable performance.) 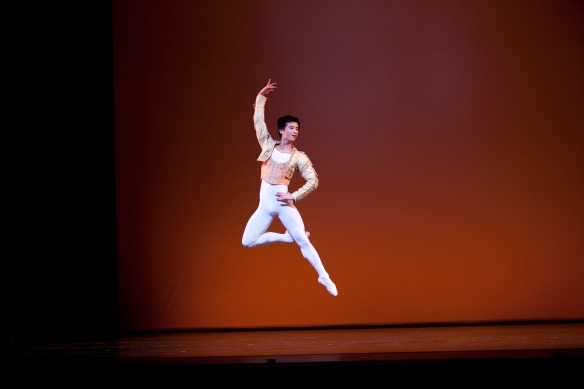 Last night’s promotion wasn’t the first this year for Guo, who at 24 is the youngest of the principal artists. He was made a senior artist in April after his delightful Basilio in Don Quixote. At the time I wrote: “As Basilio Guo showed a very clean pair of heels. Like [Ivan] Vasiliev [a guest artist with the AB in Melbourne] he isn’t tall and it helps him in the air, where he is exciting. The stage – particularly in Sydney – is too small for his space-eating energy. And he’s a sweetheart, fun and bubbly.”

So – a night of losses and gains.