Maina Gielgud, artistic director of The Australian Ballet from 1983 to 1997, is in Sydney preparing to restage her acclaimed 1986 production of Giselle, last performed by the company in 2008. It will premiere in Melbourne on March 13, 2015, with seasons to follow in Sydney, Canberra and Adelaide. In a frank and lively conversation with AB artistic director David McAllister at a Friends of the Australian Ballet gathering, Gielgud spoke extensively about her love for the ballet, issues of style and her personal breakthrough from dancing Myrtha to being cast as Giselle.

She is emphatic that ballet is thriving. “There’s been all this talk about classical ballet being dead; what is most interesting about this period of classical dance is that it’s in a time of renewal,” she says. Gielgud sees in Alexei Ratmansky and Christopher Wheeldon choreographers who make work that will endure, and strongly believes that Royal Ballet principal artist Natalia Osipova has brought new life to the art form, giving her perhaps the ultimate compliment: “Osipova is the Pavlova of the 21st century.”

After leaving the AB Gielgud directed Royal Danish Ballet for two years and since 1999 has worked in a freelance capacity around the world. After 15 years of an exceptionally peripatetic life she has no desire to slow down, despite, she says, spending only two days of the year at her London apartment. In addition to her many freelance commitments she recently accepted the position of artistic adviser to Hungarian National Ballet, for which she will stage Kenneth MacMillan’s Manon in between rehearsals for Giselle in Australia and the production’s opening in March. “I’ve been a gypsy all my life,” she says. “I want to continue to teach and coach. One never tires of it, and continues to learn along the way.” 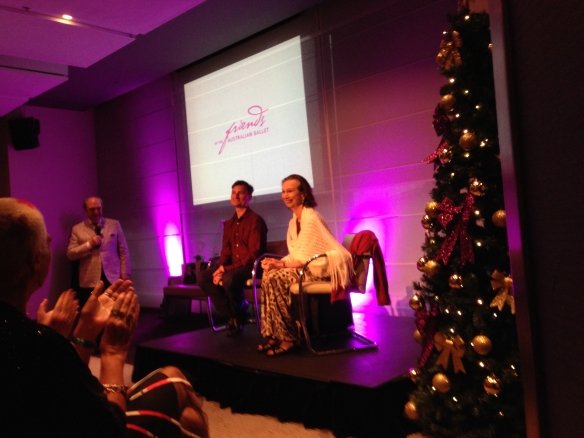 McAllister: The dancers are so excited about working on this production. It’s one of the most beautiful productions of Giselle in the world and we haven’t had in the repertoire since we did the season in 2006 and took it to Brisbane in 2008 for just six shows. For you it must be almost like working with a completely different company.

Gielgud: It is. Most of them have not touched any of Giselle – certainly the Giselles and Albrechts. I think there are only two – Madeleine Eastoe and Adam Bull. The others are all completely new to it. Some have done a friend or a peasant, but very, very few. When I first staged Giselle for this company the ballet was much more familiar to the dancers then through Peggy van Praagh’s version. [In an email to me later, Gielgud wrote that while she didn’t stage the van Praagh version for the AB, “I seem to remember that I rehearsed dancers in it, and she was in the studio with me…” She also wrote that while she did not mention it at the Friends gathering, she was aware of current principal artist Daniel Gaudiello’s appearances as Albrecht with Queensland Ballet: “I love Dani’s dancing and artistry!”]

McAllister: In 1985 when the company was on tour [with the van Praagh Giselle] there was a fire in Whyalla in South Australia and everything was burned. [Gielgud: I’d completely forgotten that.] The costumes were in another part of the theatre and they were fine. It was the set – and the only thing that was left standing was the Giselle cross. The only thing left standing.

Gielgud: It reminds me that Giselle in Russia is known as the holy ballet. Maybe that’s why the cross survived. This was an opportunity for a new Giselle, which I’ve loved all my life. I wanted to do a very beautiful production and I wanted to do a very logical production in terms of the storytelling of the first act. Sometimes there are Giselles where the choreography is there but the communication between the characters and the storytelling are not terribly logical. It’s so important that the first act is telling the story so the audience can really care about the characters and therefore this wonderful transition to the second act: this eerie place and the importance of forgiveness and transformation through love.

I did love Anton Dolin’s version and Mary Skeaping’s second act particularly. The stylistic qualities that she brought to it, I felt were very, very important and often overlooked. Not only because that was the style of the period, but I don’t think I realised to what extent that style brings out the eerie quality of the ballet. I have seen many productions where the style seems to be completely overlooked. Though it’s very well danced, it’s danced like Sleeping Beauty could be, or Bayadere or any classical ballet. It’s quite bizarre. You see the arms up here and it could be Swan Lake. I wanted the feeling for the Wilis, and particularly the Lead Wilis, as if they are moved by the wind in the forest.

I’ve done this production many times here, three times in Boston, a couple of times with Ballet du Rhin, once in Houston – always looking for that quality in the Lead Wilis. I discovered that the way of moving – perhaps particularly with [the AB’s] Miranda Coney, why she had that extraordinary ethereal quality – was it’s the same thing as contemporary dance. Now you really think I’m crazy. But it’s a way of moving, of using the weight of the body, which often in classical ballet – wrongly in my opinion – gets completely forgotten.

I can go on about this quite a lot. There’s such an emphasis on being correct in classical ballet, and that you have to be absolutely straight and on your leg and so on, and actually the most interesting thing, especially in Romantic ballet, is to know how your weight is – am I boring you? [cries of “no” from the audience] – on your leg so you can transition to being off-balance in whichever way you want. When you push yourself off balance it looks as though it’s not the dancer trying to do something but they’re being swept by the movement, by the weight of their body. Which happens in contemporary work. There’s much more use of the head as well. So I keep telling the dancers, don’t think of it as a classical ballet, think it’s contemporary – and they’ve done so much contemporary they really understand what I’m talking about.

In the early days I watched many, many performances and would go home and practise madly in the bathroom mirror what I would do with the mad scene if I ever got the chance of performing it. I danced in countless productions as Queen of the Wilis, which I loved doing, a wonderful role and a role that people thought I was suited to. But I desperately wanted to do Giselle. All that practising the mad scene. I think I was in my late 20s when Rosella Hightower gave me the chance of doing it.

I wanted people to realise I would make a really good Giselle. I worked out that Myrtha, when she comes out of the grave before the Wilis come in, before she summons them, she was also one of those who loved to dance, that’s why she was transformed into a Wili. So I thought I could show a very lyrical quality in the first dance before the wilis come in, then make her commanding.

Shortly after doing Giselle in Cannes with Hightower I was doing Mary Skeaping’s version with London Festival Ballet. Anton Dolin, who was the person staging Giselle all over the world and who I worked with quite a bit, came to see my performance and he came backstage afterwards. He looked at me and said [Gielgud assumes a very surprised tone]: ‘That was very good.’

[Gielgud laughs heartily.] ‘’I was really upset. ‘I could have told you before.’

“So the ballet meant a lot to me.”

This is an edited version of a conversation that took place in Sydney on December 7, 2014, under the auspices of the Sydney-based Friends of The Australian Ballet.