IF this had been The Australian Ballet, this is what would have happened. During the curtain calls the artistic director would have come on to the stage, microphone in hand, and elevated the evening’s Giselle to the rank of principal. But it was American Ballet Theatre, and although AD Kevin McKenzie was in the house – he made a pre-performance announcement – he did not right what many observers think is a long-standing wrong. Soloist Stella Abrera remained unpromoted. It was, in fact, only injury to another dancer that delivered Abrera her New York premiere as Giselle (last month she danced the role with the AB in Sydney and has also danced it in the Philippines).

ABT principal artist Polina Semionova was to have danced on Saturday night but was announced as injured on May 18. Abrera therefore got the nod at fairly short notice that she would finally be appearing as Giselle before her home crowd, and would do so with starry Mariinsky guest artist Vladimir Shklyarov. 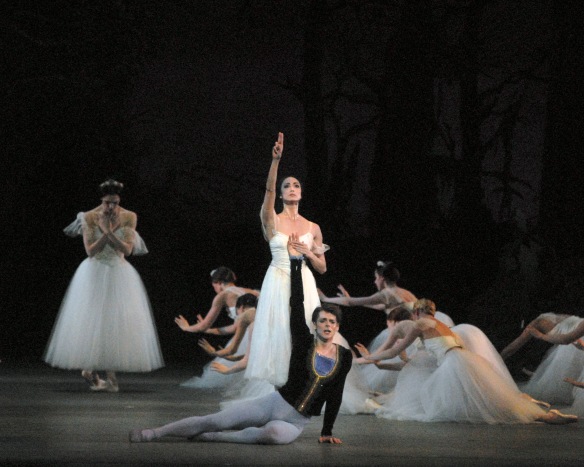 There are eight ABT performances of Giselle in the current Spring season and eight casts. (Just one to go as I write, featuring the exciting partnership of Natalia Osipova and the Royal Ballet’s Steven McRae. I will be there.) Interestingly two of the performances were farewells to veteran ABT principal artists – Paloma Herrera, 39, and Xiomara Reyes, 42, at the matinee and evening performances of May 27. Another of the Giselles, Julie Kent, 45, retires on June 20 in Romeo and Juliet. So it’s not as if there’s not room at the top for another principal woman (and let’s not forget Misty Copeland, also still a soloist but who also dances many principal roles). On the subject of Reyes, she said something very telling to The New York Times when it ran a piece on the three imminent departures from ABT: “I thought it would end when my body would tell me. My body hasn’t told me yet… I cannot tell you I am ready to retire… Where I am as a dancer is not necessarily where the company is as an institution.”

But let’s not dwell on negatives. Abrera’s New York debut was a triumphant occasion, made even more special by the presence in the house of about 200 former ABT dancers, who were to attend a party after the performance as part of the company’s 75th anniversary celebrations (that was the reason McKenzie stepped before the curtains: to ask us to applaud the contribution of the alumni). There’s nothing like an incredibly knowledgeable and supportive audience to ramp up the excitement level.

Abrera’s warmth and simplicity informed every moment of her performance; there wasn’t a thing that didn’t feel genuine. The story was told clearly and modestly in Act I, culminating in a mad scene that tore at the heart. As she loses her reason Giselle re-enacts the plucking of flower petals, which earlier had quieted her anxiety about Albrecht – he loves me, he loves me not, he loves me. Now there was no anticipation or light. Abrera shook her head piteously. He doesn’t love me. Act II was full of love, tenderness and sublime dancing from her and Shklyarov.

Come curtain-call time, no amount of partisanship could have accounted for the tumultuous reception, which went on after the house lights came up. Shklyarov, who had been such a responsive partner as well as dancing with extraordinary clarity and beauty, repeatedly kissed Abrera’s hand and knelt to her. The house went wild.

At this performance there were memorable supporting performances, first and foremost from Veronika Part as Myrtha, Queen of the Wilis, ruling her empire with icy hauteur, knockout speed and elevation, and most particularly the chilling power of the frozen moment on pointe. Thomas Forster was an ardent, salt-of-the-earth Hilarion who went to his death heroically; Misty Copeland was on song in the peasant pas; and (in a bonus for an Australian visitor) former AB dancer Stephanie Williams was a fine Zulma, one of the two lead Wilis.

The next day at New York City Ballet’s La Sylphide I saw the joyously buoyant Sylphide of Lauren Lovette, almost childlike in the way she persuaded James to flee from the weight of his obligations into the light of the forest, and as James, the incredibly impressive Anthony Huxley, like Lovette an NYCB soloist. Huxley played James as a very angry young man indeed in the first act. He was unnecessarily rough with Troy Schumacher’s warm-hearted Gurn and even more so with Gretchen Smith’s Madge. Not a happy bridegroom-to-be at all, but gloriously in command of the Bournonville style with its poised upper body, soaring leaps and fast, crisp footwork.

The production itself is unpleasing. The first-act farm house is featureless and the second act glade is remarkably ugly (designs by Susan Tammany), its colours and swirls reminding me somewhat of 1960s tie-dying. The corps de ballet of sylphs was lovely but the atmospherics quite inimical to their Romantic shapes. And as for the garish tartans! Poor James is a riot of intense purple. Least said soonest mended.

NYCB ballet master in chief Peter Martins does give value for money though. He ran La Sylphide without an interval and preceded it with Bournonville Divertissements, a set of bits and pieces from various Bournonville works. It didn’t hang terribly well together but there were compensations in the form of Teresa Reichlen and Tyler Angle in the pas de deux from Flower Festival in Genzano, both vivacious, flirtatious and alert in all the tricky oppositions of head, shoulders and torso; and the lively full-cast Tarantella from the third act of Napoli.

Another suite of dances that didn’t do the trick for me is West Side Story Suite, seen after a performance of Jerome Robbins’s Goldberg Variations. Robbins put together selections from West Side Story for Jerome Robbins’ Broadway in 1989 and re-staged them for NYCB in 1995, and they haven’t aged particularly well. That said, had they been performed better when I saw them they would have been more tolerable. The dancers are required to talk a little and sing a bit, neither things of which they did to any high degree of accomplishment, but then the professional singers who stepped into for Something’s Coming and Somewhere weren’t top drawer either. Even The Dance at the Gym and America didn’t really catch fire, which says it all.

Happily Goldberg Variations was infinitely more absorbing. A long work at nearly an hour and a half, it at times feels as if Robbins fell in love with the notion of variations a little too deeply, but there is always something of interest to catch the eye in each section and a lovely sense of flow as each part overlaps with the next so there’s constant refreshment. Along with courtly Baroque gestures that pay homage to Bach there are many contemporary demotic touches as dancers somersault, lie on the floor for a moment or walk about. On Tuesday night there was also plenty of radiant classical dancing, most decisively from the three pairs of principals who dominate the final section, Tiler Peck and Gonzalo Garcia, Rebecca Krohn and Jared Angle and Maria Kowroski and Tyler Angle.

1 thought on “Room at the top”