IN the life of an inveterate dance-lover there are many Giselles and many new insights into the ballet and its characters, or at least one always goes in hope that will be the case. Details and nuances that create character register differently with each exponent. How does Giselle react when Albrecht wants to share her little bench; is she overwhelmed or fascinated by Princess Bathilde; to what degree does she reveal her heart condition; how is Albrecht’s betrayal absorbed? These and myriad other things are woven together to make an individual interpretation. Albrecht too will appear in many different lights, from the boy out of his depth to practised deceiver and anything in between.

This week in New York I was able to see two interpreters new to me, both of whom I had wanted to see for some time. I wrote about Stella Abrera’s New York debut here. On Thursday night the wondrous Royal Ballet pairing of Natalia Osipova and Steven McRae electrified the Metropolitan Opera House. It was one of the great, great nights in the theatre. 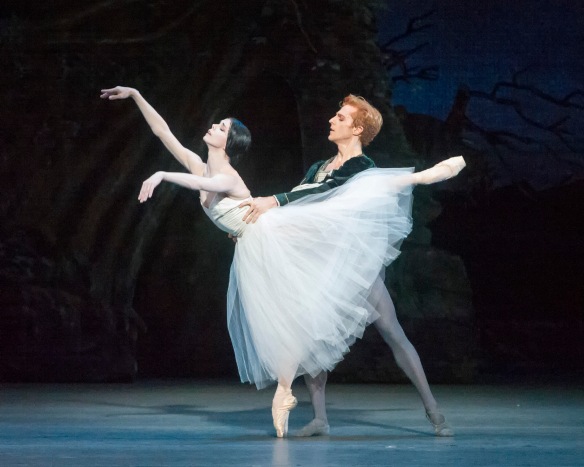 I realised then that Osipova has given me three of my most memorable ballet experiences. The first was in 2007 when she took London by storm in Don Quixote with the Bolshoi. She was still a teenager, dancing with the even younger Ivan Vasiliev. The company was then led by Alexei Ratmansky, whose iconoclastic ways – favouring this young pair to open the season over established Bolshoi stars!! – did not endear him to that sclerotic institution. The second time was in New York in 2012 when she danced with David Hallberg in Kenneth MacMillan’s Romeo and Juliet. Their first act was so overwhelming that the audience would not leave the auditorium when the lights went up for interval but kept cheering until the pair appeared before the curtain to take an exceptionally rare mid-show call (they do that in the opera here, but not the ballet).

Osipova’s Giselle had London aflame last year and had this week’s New York audience entranced and exhilarated. She tore through the ballet with a passion, leaping higher, turning more quickly and covering ground more voraciously than any other. In the diagonal of hops on pointe during Act I she moved so expansively that she had time to circle about near the end; when she circumnavigated the stage with a series of tight turns, she was an unstoppable force, the small whirls within a larger one giving the effect of a tornado.

Her dramatic choices – and they can’t be separated from her dance choices – are equally thrilling. I was particularly struck, for instance, by the way she revealed the strain on Giselle’s heart during the crowd dance of Act I. Many dancers make this a big moment, obviously struggling for breath and hunching over before going to rest on a bench. Osipova stiffened, then walked a little to and fro to compose herself, as if willing herself to be well, and then rejoined the dance.

Where was Albrecht in all this? Vitally, tenderly present in the form of Steven McRae. I have never seen the peasant girl and high-born man seem such powerful soulmates. The clarity and complexity of McRae’s acting is wonderful. He gives not just the broad picture but makes every moment vivid, fresh, illuminating and dramatically coherent. His dancing, it goes without saying, was full of brilliance without being bombastic. But there was no more riveting moment than one of complete stillness, when Albrecht heard the distant horns of the Royal hunting party and understood the chaos to come.

Osipova is a risk-taking dancer and on Thursday night she fell heavily towards the end of her final solo and took several agonising seconds to recover enough to stand. She limped back to the centre and resumed dancing, finishing the ballet not only courageously but with melting beauty. The curtain call was reorganised to limit her movement and it is unclear to what degree she is injured.

Veronika Part, who danced the Queen of the Wilis (perhaps with not the same degree of imperiousness as in the Abrera performance), took on the task of welcoming conductor Ormsby Wilkins to the stage, but Osipova took her calls before the curtain generously. As with Abrera, the audience was unwilling to leave when the house lights went up and Osipova and McRae received several more ovations.