CAN a robot dance? It can move, of course, doing whatever its programmer has decided upon and is able to achieve technically, but is that movement dancing? And do we express the title of the work as Huang Yi & Kuka or HUANG YI & KUKA? The first implies a human-style name for the robot with which Taiwanese choreographer and dancer Huang Yi interacts. The second seems to align Huang with the company that makes the robot, KUKA Robot Automation Taiwan Co. Ltd (and it’s how the program writes it). This may seem a nitpicking question but I’m not so sure. I think it goes to the heart of what Huang is doing and to a question that the ending of his work raises. Do we control robots or are we creating entities that may be able to control us? 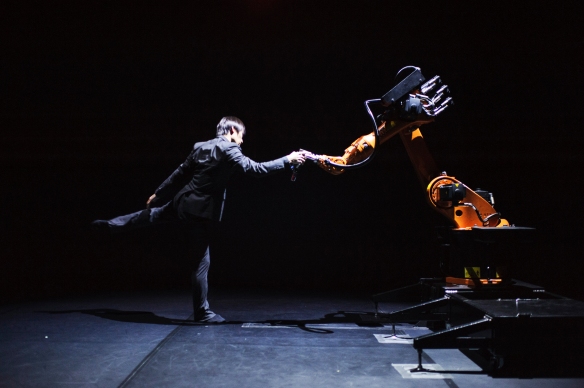 Huang created this work in 2013, spurred by childhood pressures. His family had lost its wealth, his parents were greatly distressed and he felt the need to be emotionally detached and to appear to be the perfect child. He found his answer in robots.

KUKA has a solid, grounded base and a graceful, articulated spine that in movement can look like an angel. As Huang and KUKA mirror one another’s actions, one can’t help but ascribe human qualities to the machine, even as we hear all the whirrs and clanks that go with its operation. In soft, shadowy light, Huang and KUKA reach out to one another, or KUKA helps Huang with a chair on which he performs part of his dance. Huang’s connection with KUKA is both a matter for dispassionate admiration (isn’t it amazing that a machine can be programmed to do such things) and stirrings of the heart (isn’t it sad to see a man seeking communion with a computerised bunch of metal).

Huang obviously knows this material can go only so far (and it probably goes for a little longer than it needs to). There is also a touch of emotional manipulation in the choice of music, a mix of Arvo Pärt, Bach and Mozart’s sublime Piano Concert No. 23, the last of which does a fair bit of heavy lifting. A final scene introduces Lin Jou-Wen and Hu Chien, who sit on chairs facing one another and whose movements appear to be directed by KUKA. They stop and start, their arms mechanistic and their bodies jerky. Hu lifts and embraces Lin but they are separated by a laser beam. The machine has prevailed, or at least that’s the immediate perception.

But then you see Huang, Lin and Hu take their bow. They are the dancers.

HUANG YI & KUKA ends at the Seymour Centre on March 19. It will be performed at Steps Dance Festival in Switzerland in April.