When The Australian Ballet stages Stephen Baynes’s traditional Swan Lake in Sydney from April 1 for 21 performances it will field six couples in the leading roles of Odette-Odile and Siegfried. One of those couples was to have been senior artist Natasha Kusch with principal Daniel Gaudiello, a partnership that promised a great deal. Kusch, then a soloist with Vienna State Opera Ballet, first danced with Gaudiello in a Queensland Ballet gala in 2012 where they were clearly an excellent match on stage. Soon after Kusch joined QB and then the AB in 2015, where she and Gaudiello danced together regularly.

As late as Wednesday of this week – March 23 – casting on The Australian Ballet’s website listed Kusch and Gaudiello. On Thursday a press release came late in the afternoon, advising that Gaudiello was leaving the company after 12 years, the past six as principal artist. His performance in Melbourne on Monday March 21 in the Vitesse program was his last. I saw him on the opening night of that season in William Forsythe’s In the Middle, Somewhat Elevated, which he danced with passionate intensity and impeccable technical gifts. He was sporting a new, sleeker haircut that was much remarked-upon. He was at the top of his game.

Daniel Gaudiello and Natasha Kusch in In the Upper Room. Photo: Jeff Busby

Obviously Gaudiello’s decision had come quickly in one way, in that he was expected to appear in Swan Lake, but he must also have been weighing up what was best for him for many months. The AB’s press release said Gaudiello “for some time has been working towards this decision”.

Possibly he wished to avoid the high-visibility public farewell usually accorded a principal artist. Alternatively, he simply woke up on Tuesday and thought, today’s the day.

There were no specifics in the press release about Gaudiello’s plans, other than he had “decided to step away from the stage and focus on new artistic and personal pursuits”. Gaudiello wrote on Facebook: “The humanity in dance is what has kept the art form alive, and what has kept me coming back after the hard knocks it gives us all. No one escapes this time in their careers, where something dies but something is born again.” He went on to write that his “drive to succeed is at an all time high” and that he still has “a lot to say”. He is believed to be interested in an acting career, something for which he would seem well suited. Among his many successes in roles requiring a strong ability to create a believable character are Petrouchka, Basilio in Don Quixote, Franz in Coppélia and, outstandingly, Mercutio in the Kenneth MacMillan Romeo and Juliet at Queensland Ballet, in which he appeared – brilliantly – alongside the Royal Ballet’s Steven McRae as Romeo. 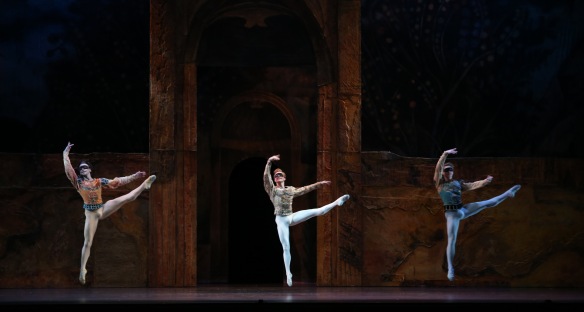 Gaudiello’s announcement was followed immediately by heartfelt expressions of love and admiration from dancers and dance-lovers. British choreographer Christopher Wheeldon was just one to express dismay at Gaudiello’s retirement from dance, writing “even I’m not ready and I was only there for 10 minutes”. (Wheeldon refers to his brief visit to Melbourne to put the finishing touches on DGV: Danse à Grande Vitesse, the ballet that gave the Vitesse program its name.)

Gaudiello is 33 and at the peak of his powers, but also at an age when the future starts looming large for dancers. (I recall having a vivid, detailed conversation with him about choreography, in which he has some experience, although it’s not clear that he intends to pursue this.) For all its beauty dance is a brutal business, exacting a great toll on the body. Not only is a career usually winding down when a performer is in his or her late 30s or early 40s, she or he has also usually been training and working in dance for more than 30 years. Gaudiello started dancing at the age of six in his hometown, Brisbane. (The AB’s artistic director, David McAllister, was 37 when he left dancing to succeed Ross Stretton at the company.)

With Gaudiello now not dancing in Swan Lake, the AB hastily rearranged its schedule. Amber Scott and Adam Bull are first cast, followed by Ako Kondo and Chengwu Guo, Lana Jones (she is married to Gaudiello) and Ty King-Wall, Leanne Stojmenov (happily back from maternity leave) and Kevin Jackson and senior artist Miwako Kubota with principal Andrew Killian.

The sixth cast is Kusch with hard-working Killian, a pairing that gets its first outing on April 13, with two further performances to follow. The show always goes on. For Gaudiello it will just be a different one.