There are no dancers in The Australian Ballet today that interest me more than Benedicte Bemet and Brett Chynoweth, she a soloist and he a senior artist. No matter where they are on stage or in what role, it’s as if there’s a special spotlight picking them out. They shine just that little bit more brightly than those around them. You can’t fail to notice them, even in the more anonymous roles that fall to anyone not yet a principal artist.

Rankings are, to a degree, a matter of personal taste. There are many fine dancers who never make it to principal artist and whose fans will never be able to understand why. But Bemet and Chynoweth – well, I would be astounded if the AB’s highest level were denied them for much longer.

Last year both were promoted to their current rank after performances in artistic director David McAllister’s new production of The Sleeping Beauty. “The possibilities for Bemet would appear to be boundless,” I wrote at the time. “Her Aurora rates as the most exciting debut I’ve seen in more than 40 years of ballet-watching. At just 21 she brought the authentic glow of youth and promise to the stage. She was so entirely at one with the role that all the technical requirements and difficulties simply disappeared. Every step was part of her journey from innocent to prospective bride to woman on the brink of maturity.

“Usually one has a sympathetic butterfly or two as the dancer approaches the climactic balances and promenades of the Rose Adagio but not here. Bemet was absolutely in the moment and so was her audience. The balances were astonishing – the audience went wild – and they were part of a story. There was purity, radiance and joy in Bemet’s dancing. She was enchanting; a promotion to soloist swiftly came her way.”

To be honest, I wouldn’t have been surprised if McAllister had bounded on to the stage to promote Bemet to principal on the spot. It would have been unorthodox, but the situation was far from usual.

When Chynoweth danced the Prince in the Peter Wright Nutcracker in 2014 he gave notice that he was more than just a brilliant dancer in contemporary pieces; more than the speedy, not-so-tall guy who is seen as a natural Mercutio but perhaps not Romeo. Last year it was heartening to see him again given the chance to play the Prince, this time in Beauty. Chynoweth “radiated passion from every pore and his Act II solo, marked by pillowy elevation and immaculate airborne turns, was a glorious expression of longing,” was how I wrote about it.

This year the two have been partnered in Coppélia, making role debuts as Swanilda and Franz at the first Saturday matinee of the Sydney season. They have two more performances in what is a crowded field taking on the principal roles – there are six leading pairs in all, including that of AB principal artist Amber Scott with American Ballet Theatre and Bolshoi Ballet principal artist David Hallberg, who is making a return to the ballet stage from a long absence due to injury. Franz will be a role debut for him.

Coppélia is an almost weightless romance that holds hands briefly with darkness but firmly banishes it. Swanilda and Franz are betrothed, he falls for a time under the power of the strange doll-maker Dr Coppelius but is saved by Swanilda, who forgives his lapse of judgment. All rejoice as the young lovers marry, bringing harmony and all that is good to their little community. 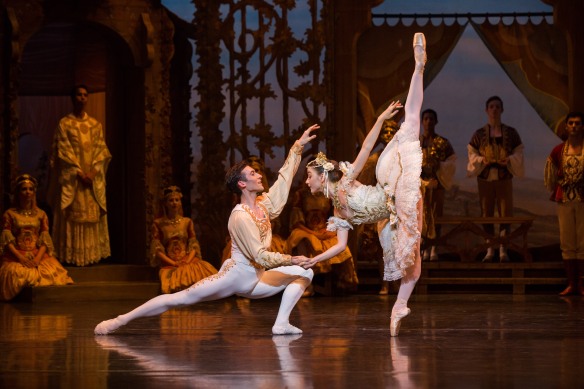 It was delightful to see Bemet articulate Swanilda’s razor-sharp pointe work and beaten steps with such artlessness, sweetness, buoyancy and freedom. Where some Swanildas offer calculated flirtatiousness (and sometimes regrettably twee village-girl mannerisms), Bemet bubbles with natural gaiety. In Act II, when Swanilda pretends to be Dr Coppelius’s doll come to life, her resourcefulness comes to the fore and the brief Spanish and Scottish dances are done with a more knowing edge.

Swanilda drives all the action in Coppélia. It’s Franz’s job to be a bit silly, incredibly charming and – now the role is danced by a man rather than a woman en travesti, as was traditional – to dance his socks off and partner gallantly. (There was a spot of bother at one point in the complex partnering at Chynoweth’s first performance but recovery was swift.) Chynoweth needs to find more of Franz’s laddish sense of fun but there are few in the company to match his finesse and elegance. The outlines are defined with diamond-edged precision; the movement quality is bountifully plush. It’s a gorgeous combination.

Bemet and Chynoweth appear in Coppélia on December 6 and 15.

2 thoughts on “Coppélia, The Australian Ballet”