The high-falutin’ way to describe director Richard Carroll’s Calamity Jane is to say its abundant meta-theatrics put a contemporary, ironic frame around an old-fashioned musical, revealing fresh insights. If that sounds deadly, fear not. The low-falutin’ truth is that along with being outstandingly clever, Calamity Jane is gut-bustingly funny and has an extraordinarily generous heart. Crucially, it is blessed with a central performance by Virginia Gay as fine as any seen on our musical stages since, I don’t know, forever.

Calamity Jane was presented last year as a staged reading in the Hayes’s Neglected Musicals series and turned out to be quite the surprise package for a piece that offers embarrassments on several fronts, including but not limited to race and gender. 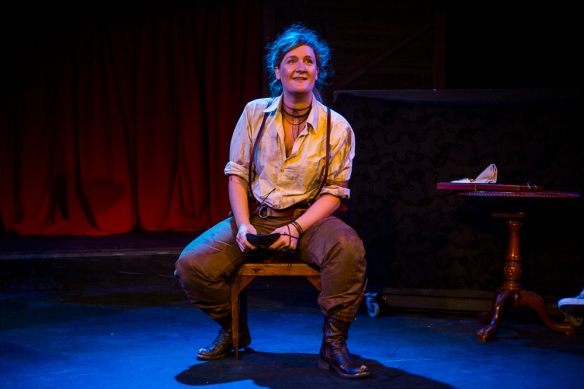 Take a look at Doris Day’s perky simplicity in the 1953 film that spawned the 1961 stage musical. Seen through the filter of the half-century since then, Calamity comes across as the town pet, patronised, indulged and patted on the head. If only she’d wash her face and put on a pretty frock: why, then she would be lovely and some man might condescend to marry her.

Gay’s Neglected Musicals turn, achieved with nothing more than a day’s rehearsal and book in hand, showed there could be a much more nuanced 21st-century take on a mushy mid-20th-century interpretation of an unconventional 19th-century woman. Calamity Jane had intriguing possibilities and a full production was put in the works. One likes to think the original Jane, real-life frontierswoman Martha Jane Cannary, would heartily approve.

Gay’s Calamity, or Calam as the good folk of Deadwood City call her, would smack you hard in the puss if you called her perky. She’s a roiling mass of powerful contradictions and ambiguities. Calam is physically strong and emotionally insecure; she can ride and shoot with the best of them but off a horse is a klutz; she’s blustery and bashful; resourceful and inept.

Only Calam would dash off to Chicago to bring back a superstar of the variety stage to save the bacon of old-duffer Golden Garter Saloon proprietor Henry Miller (Tony Taylor), who has stuffed up his entertainments program. Only Calam would bring back the wrong gal, ambitious but sweet Katie Brown (Laura Bunting). And only Calam, who has a heart the size of South Dakota, could make things right when Katie’s Golden Garter debut is a disaster.

She finds it much harder to sort out her love life, which is non-existent but so deeply wanted. Calam is desperate to be desired and perhaps it doesn’t really matter by whom. Whether Gay is assiduously tending to the wounds of her first choice, dashing Lieutenant Danny Gilmartin (Matthew Pearce), or getting hilariously and Sapphically domestic with Katie, or discovering (spoiler alert!) that her old sparring mate Wild Bill Hickok (Anthony Gooley) feels something for her, her eagerness makes Calam achingly vulnerable. 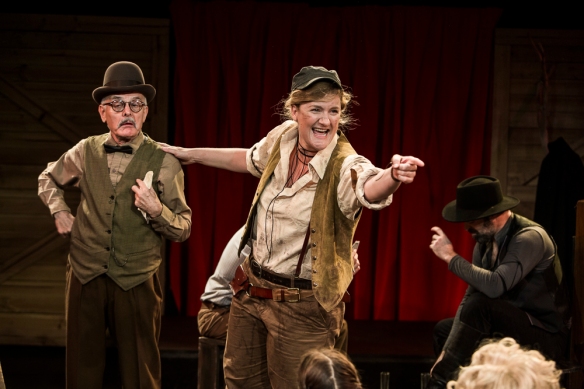 The great beauty of Carroll’s production is how easily this emotional truth sits alongside the rollicking self-referential comedy, with its show-within-a-show-within-a-show jokes (“Now I’m going to sing Ev’ryone Complains about the Weather from Calamity Jane”), contemporary gags and happily blurred lines between actors and audience. The casting of Gooley as Hickok is particularly successful. He makes the legendary gunman a more observant and warmer figure than might be expected and he sings the wistful Higher than a Hawk with quiet grace.

The director makes having a tiny budget look like a brilliant artistic choice. The bijou cast size means Sheridan Harbridge and Rob Johnson have to take on several roles; both seize every chance to turn the multi-tasking into comedy gold of the highest grade. With music director Nigel Ubrihien at the upright piano there’s a band of precisely one, augmented by cast members on guitar, ukulele, trombone, accordion and tuba. And as there are only seven performers to represent rather more than seven characters, Ubrihien has to double as an actor too, which he does with aplomb.

Designer Lauren Peters’s bare-bones Wild West saloon, beautifully lit by Trent Suidgeest, works a treat and Cameron Mitchell’s choreography is a hoot. Adding to the general delight is the truly gorgeous score by Sammy Fain (music) and Paul Francis Webster (lyrics), blissfully heard unamplified. Every song is a winner but first among equals are The Black Hills of Dakota, sung a cappella by the ensemble, and Gay’s thrilling My Secret Love.

I confidently predict Calamity Jane will get a standing ovation from the entire house at every show. I have more reasons than the ones just enumerated here but try to see for yourself, if you can get in. The run has been extended but seats are scarce.

A version of this review appeared in The Australian on March 13.